On Monday, President Obama will host the leaders of the 10-country Association of Southeast Asian Nations in Rancho Mirage, Calif. They’ll meet at the Sunnylands estate, comprised of acres of lush green gardens surrounded by desert. One can only imagine how many of the assembled leaders will enjoy trading stories about how to maintain their grip on power.

Among those attending will be the prime minister of Vietnam, the president of Laos and the sultan of Brunei, all of whom rule their states with a heavy-handed authoritarian grip. Also in attendance: Cambodia’s prime minister, who has ruled his country for 30 years with little tolerance of dissent, and Thailand’s military junta leader.

And yet, ironically, it is Prime Minister Najib Razak of Malaysia, whose country is viewed as an erstwhile and even pseudo-democratic ally of the U.S., who stands out this year among the sordid lot.

Najib was elected in 2009, and many Malaysians hoped he would steer the country toward moderation, tolerance and political reform. But captured by his conservative Malay-Muslim base, he advanced divisive policies and oversaw a crackdown on civil society, the press and opposition politicians. As Najib ran for re-election in 2013, Anwar Ibrahim led a multiethnic and multireligious opposition coalition, which won a shocking 51 percent of the vote, handing Najib’s party its worst ever loss since the country’s independence in 1957. Nevertheless, because of extreme gerrymandering, Najib retained his grip on power. 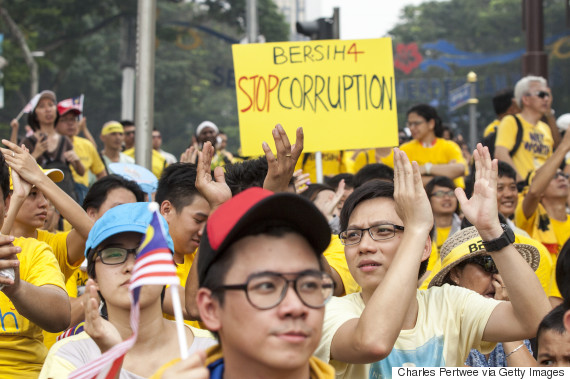 Protestors during an anti-corruption rally in Aug. 2015 in Kuala Lumpur.

Reneging completely on his pre-election promises to liberalize the country’s oppressive laws, Najib doubled down on repression. He resumed the politically motivated case against Anwar to remove him from the political scene, ultimately securing a conviction and a sentence of five years imprisonment on bogus sodomy charges. Amnesty International labeled Anwar, who I provide legal counsel to, a prisoner of conscience. Human Rights Watch called his conviction a “travesty of justice.” Ambassador Samantha Power recently joined the United Nations in calling for his immediate release.

Najib has also deployed the antiquated Sedition Act and other repressive laws as weapons of mass oppression. More than 150 Malaysians, including students, professors, journalists, cartoonists, activists and human rights lawyers, who all dared to confront the government, have been arrested, charged or imprisoned.

But even worse, Najib’s government has stoked animosity between his political base and the country’s large ethnic Chinese and Indian communities as well as religious minorities. Last September, a “red shirt” rally in downtown Kuala Lumpur, addressed by government ministers, urged Malays to rally against a purported plot by the Chinese to usurp Malay political power. State-run media organizations disparage Shiite Islam. And despite his claims of moderation, Najib famously urged his ruling political party at a national convention to be “brave” like so-called Islamic State fighters. 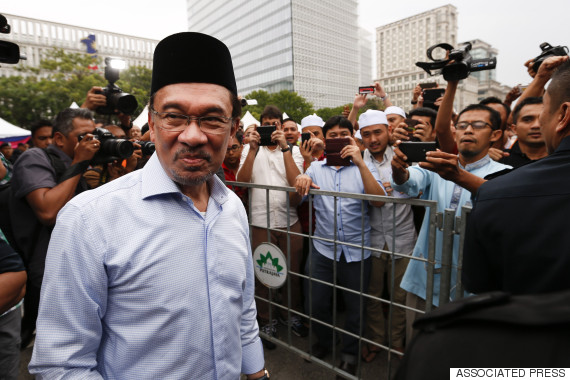 After a Friday prayer, Anwar is greeted by his supporters as he heads back to a hearing on his bogus sodomy conviction in Nov. 2014.

These domestic strategies appear designed to maintain support from his shrinking political base and intimidate and silence those speaking out domestically about Najib’s twin corruption scandals. There are billions of dollars of unexplained losses in the state-run investment fund 1Malaysia Development Berhad, and he put a “donation” of $681 million from the Middle East into a bank account in his own name.

To forestall Malaysian investigations into 1MDB last July, Najib sacked his deputy prime minister and four ministers and replaced his attorney general. Meanwhile, Swiss authorities claim $4 billion is missing from 1MDB, and the FBI opened an investigation into money laundering allegations last fall. And then in late January, the new attorney general — appointed by Najib — ruled that the money deposited into Najib’s personal account had been a “gift” from the Saudi royal family but that $620 million had been “returned.” No explanation was provided about the intent of the gift or how the missing funds were spent.

The U.S. has courted Malaysia as a moderate Muslim country to be a key partner in counterterrorism efforts in Southeast Asia. And no doubt Obama is grateful for Najib having signed and secured parliamentary ratification of the Trans-Pacific Partnership, which he counts as a crucial achievement. 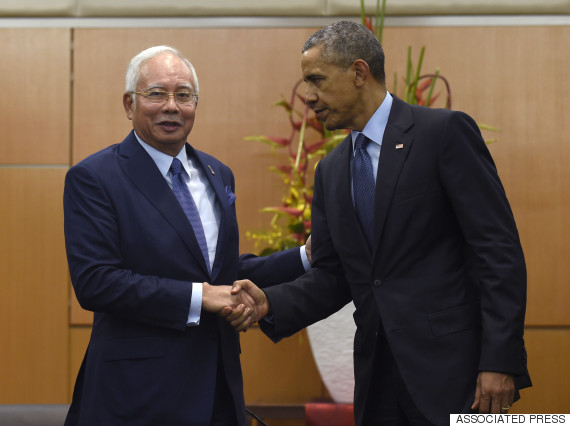 Obama shakes hands with Najib in Kuala Lumpur in Nov. 2015.

Yet at the same time, Obama’s muted public response to Najib’s repressive ways, the failure of the administration to criticize Najib’s role in fomenting radicalization through Malaysia’s state-run media and the willingness of the U.S. to maintain its embrace of this particularly toxic leader has been deeply disheartening to Malaysia’s democrats and civil society leaders.

Conversely, strong American diplomacy in the case of the former president of the Maldives, Mohamed Nasheed — who, like Anwar, is a moderate Muslim democrat and had been sentenced to years of imprisonment on manufactured charges — led to Nasheed’s recent travel abroad for medical reasons. Both men are leading voices in their countries against the forces of division and radicalization. One remains in prison.

When Obama meets Najib over canapés and toasts to the vibrancy of the U.S.-ASEAN relationship, it is time for a new direction. Obama must publicly demand Anwar’s immediate release and the dismissal of politically motivated charges for sedition and other crimes facing so many activists in Malaysia. Obama remaining silent is tantamount to giving Najib a license to act with impunity.