HOLLYWOOD, Calif. — Days before celebrities strut their Armani and Gucci gowns at the Oscars, protesters rallied on the red carpet Friday to shine a spotlight on one of the awards show’s biggest disparities.

“When a dress becomes more valuable than the security officer who is protecting the lives of the entertainers and the folks that come to the event, that’s tragic,” Robert Branch, a security officer who has a full-time, union-negotiated job in downtown Los Angeles, told The Huffington Post.

The protest was coordinated by the Service Employees International Union, which represents some security officers, janitors and other service workers, including Branch.

The Academy of Motion Picture Arts and Sciences, which coordinates the Oscars every year, contracts its security officers through Security Industry Specialists, a non-union security company. According to the SEIU, SIS pays security officers about $15 an hour, but keeps most workers on part-time schedules, preventing them from qualifying for health insurance and paid sick days.

Part-time hours also prevent a viable income, the union said. If a security worker is making $15 an hour and working 20 hours a week, for example, earnings before taxes would be about $15,000 a year. Oscar gowns, by comparison, reportedly can cost upwards of $15,000.

“It’s hypocritical for Hollywood, with its Screen Actors Guild and other unions, to contract out non-union security officers,” Branch continued. “Why can’t security officers have protection too?” 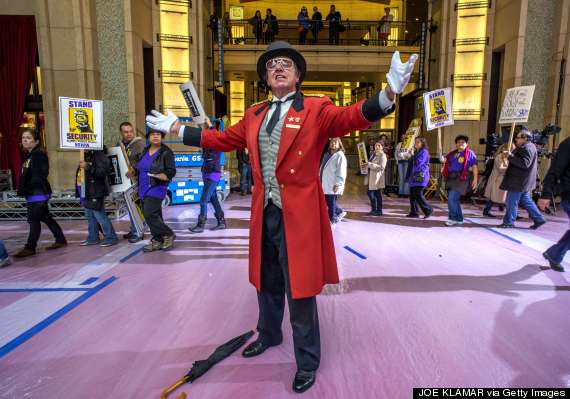 SIS provides security for large companies in Silicon Valley, including Google, Apple, Twitter and EBay. The security company is growing in Los Angeles, but still only has a few clients. For the Oscars, SIS subcontracted security officers to two companies, Staff Pro and McRoberts Protective. Seltz said he’s not sure what hours and wages the two subcontractors provide, and neither company responded to HuffPost’s request for comment.

Seltz maintained that when SIS has enough work to justify making an employee full time, it does so. He said SIS pays hourly wages ranging from $15 to $24. He accused SEIU of harassing SIS security officers about joining the union.

SEIU said in a statement that more than 40,000 security officers in the U.S., including more than 7,000 in California, have joined the union. Security officers in Los Angeles negotiated their first union contract in 2006. Branch said that, compared when he was a non-union security officer, he has more money, more employment security and more sick and vacation time as a union member.

Earlier this month, SEIU protested with about 40 security officers and community members at the Oscars nominee luncheon, attended by more than 100 nominees, including A-list actors and directors. The group plans to protest at the red carpet again during the Oscars on Sunday.