Is a new Cold War brewing in the Pacific between China and the U.S. with Japan playing a front line role? Prime Minister Shinzo Abe’s visit to Washington last week alarmingly pushed developments in that direction. In a blog he adapted from his well-received speech to the U.S. Congress, Abe proposes that the two democratic post-WWII allies join in a “seamless” strategic effort “to spread and nurture our shared values” and “stick to the path” that “won the Cold War” — and, in so many words not spoken, to contain China.

By excluding China, the world’s second largest economy, from the proposed Trans-Pacific Partnership on trade while embracing the revision of Japan’s pacifist constitution to allow military action beyond self-defense without an apology for colonialism and aggression acceptable to its Asian neighbors, the U.S. and Japan are laying the cornerstone of a new bloc system in the Pacific. As Minxin Pei writes, China’s leaders will certainly see it that way and respond in kind.

Writing from Tokyo, prominent Japan scholar R. Taggart Murphy traces Prime Minister Abe’s nationalist politics to the right wing stance of his grandfather, who was minister of munitions in the Tojo government during the war, and argues that Japan’s strategic choice under Abe is to remain an American “protectorate” in an alliance aimed at thwarting China’s ambitions in the region. Former UN Secretary General Kofi Annan hopes against such realities that world powers in the coming decade will stop seeing their interests in a zero-sum manner.

Marking the 70th anniversary of the end of WWII in Europe in 1945, Ian Buruma writes that the post-war consensus on a social democratic welfare state in Europe has fatally withered. On the eve of the now concluded British elections, British Prime Minister David Cameron — who ended up victorious at the polls — Labour Party challenger Ed Miliband and rebel comedian Russell Brand cast the contest as a battle between privilege and fairness.

Google’s Eric Schmidt and Jared Cohen write that, in the next decade, computing power will move from becoming our “assistants” to our “advisors” and help solve some of our most intractable problems. XPrize founder Peter Diamandis sees global abundance arriving by 2025 through the convergence of exponential technologies. Jordan’s Queen Rania writes that, without moral progress, this celebrated technological progress is an “illusion.” Urban planner Kate Ascher projects that, a decade from now, skyscraping cities will begin to return to a convivial human scale. Environmentalist Bill McKibben warns that what we do — or don’t do — in the next decade to curb climate change will have an enduring impact for millennia. Former Bogota Mayor Enrique Penalosa looks forward to the inclusive cities of the future.

As the negotiations on Iranian nuclear weapons move from the Lausanne framework accord toward final agreement, Iranian dissident Akbar Ganji explains that Tehran is so wary of IAEA inspections because it fears an “Iraqization” of the process — inspections that lead to war because nothing has been found and is thus assumed hidden. “Political Animals: How Our Stone Age Brain Gets in the Way of Smart Politics” author Rick Shenkman believes Americans support the accord because of a “‘projection bias’ [that] leads us to believe others think like we do.” World editor Charlotte Alfred examines what’s behind Saudi Arabia’s dramatic palace reshuffle. She also highlights 10 peace deals the world managed to pull off.

WorldPost Middle East Correspondent Sophia Jones reports from Tel Aviv on the protests of Israeli Jews of Ethiopian descent against discrimination and takes us to a Passover celebration by an ancient Samaritan sect on a West Bank hilltop.

This week, “Forgotten Fact“ revisits the drug war in Mexico and looks at the latest generation of cartels. 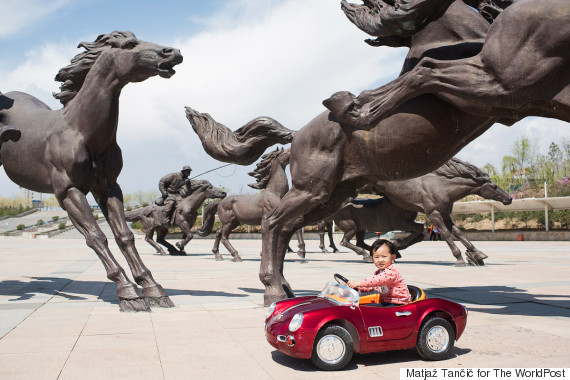 In a photo essay, WorldPost China Correspondent Matt Sheehan reports this week from Ordos that the famously overbuilt but unpopulated “ghost town” in northern China is coming to life. He also profiles Brother Orange. Fusion this week chronicles the “Communist flair” of Uber in Beijing. Writing from Kathmandu, Amie Ferris-Rotman describes how drones are helping Nepal recover from the recent earthquake.

Our Singularity University series this week shows how scientists have created the illusion of being “ teleported” into an out-of-body experience. As part of the HuffPost 10 year anniversary, Maddie Crum asks 10 science fiction writers to predict how the world will change in the next decade.

In an open letter concerning slave-owning ancestors, author Thomas Norman DeWolf tells actor Ben Affleck that “The harm our ancestors caused is not our fault. But repairing the consequences is a responsibility we all share.”

Finally, our “Other Entrepreneurs“ photo essay for the week profiles “indie capitalists” in Brooklyn.