BEIJING — Fourteen-year-old Mao Baolong wears a goofy grin as he pinballs up and down the restaurant’s cramped aisle — taking orders and delivering bowls of noodles, taking money and returning change, taking dirty dishes and returning with a rag to whisk over the tabletop. It’s grinding work, but Baolong appears to be on the edge of a giggle, and the regulars love him for it. Ignoring the baby fat that still softens his features, some of them have taken to calling him shitou — “rock.”

The restaurant is a family business through and through, funded by family savings and operated by everyone. Baolong and his 19-year-old sister Mao Fangfang act as the wait staff, while their mother and father chop, fry, knead and boil the day’s offerings. A second sister, Yufang, works at a cousin’s restaurant nearby, but comes back after midnight to help close up.

Baolong and his family came to Beijing from their hometown in Gansu province, 900 miles to the west and a world away from life here in the capital. Gansu is a rural and rugged corridor that once hosted Silk Road traders shuttling spices and religion between China, Central Asia and Europe. 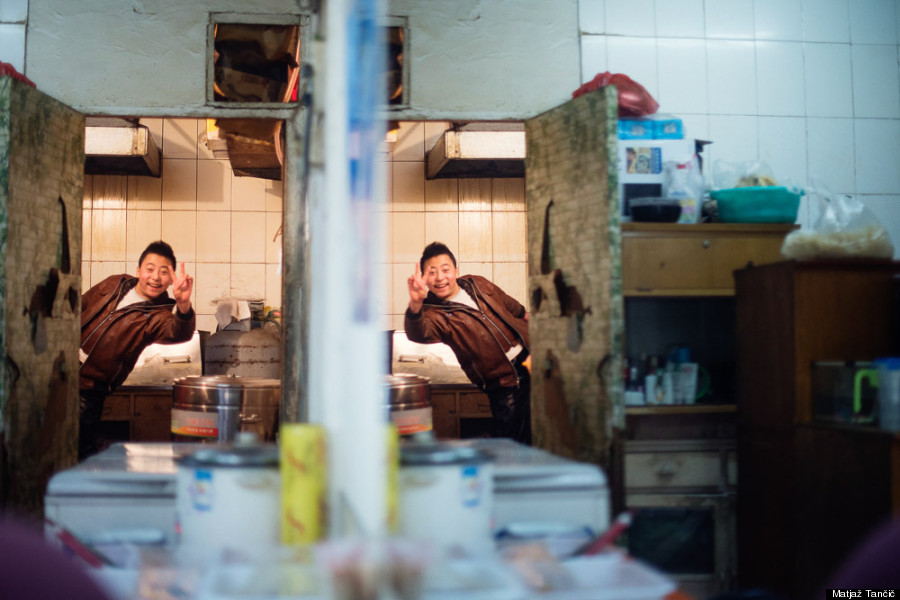 Baolong peeks out from the restaurant’s kitchen. (Matjaž Tančič for The Huffington Post)

But today, interior provinces like Gansu pale in comparison with cosmopolitan coastal regions. Members of the Mao family have been traversing the country in search of work for decades, as have most of the 260 million migrant workers in China. The children’s father left home at the age of 15, traveling to neighboring provinces on construction jobs. Their mother was on the move at a young age as well, staying home in Gansu mainly around the years her children were born.

When Fangfang was 10, her parents deemed her mature enough to take care of her two younger siblings. She began cooking the family meals while her parents labored in distant cities. All three children dropped out during middle school (“I just couldn’t sit still,” explained Baolong), and they joined their parents in Beijing during the years most Chinese students would be in high school.

The Mao family is part of China’s Hui ethnic minority — Muslims who trace some of their ancestry to Persian and Arab traders on the Silk Road. While scrupulous in their avoidance of pork and alcohol, the family does bend certain religious dictates to the realities of running a business. They serve beer to their customers, and opportunities for prayer are scarce.

“We should be praying five times a day,” lamented Baolong’s father. “There’s just no time.” 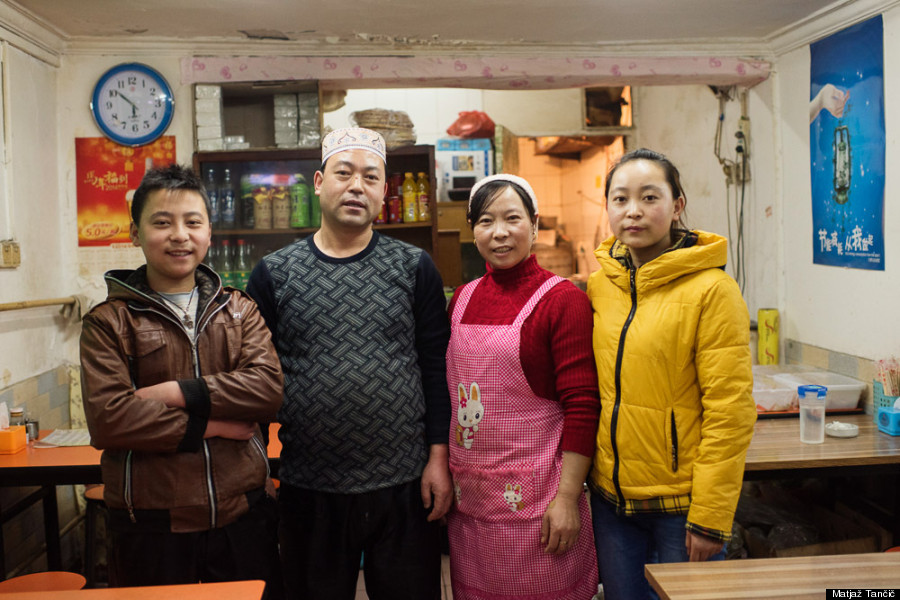 Baolong (left), Fangfang (right) and their parents in their restaurant. (Matjaž Tančič for The Huffington Post)

Time flies when you’re working 15 hours a day. Doors to the restaurant open around 11 each morning and close when the last patron calls it a night, usually around 1:30 a.m. It’s a grueling schedule, with the only benefit being that no one has time to reflect on how grueling it is. The family works 364 days most years, with the lone day of rest coming at the end of Ramadan. Like many Hui, the family doesn’t celebrate Chinese New Year, the one time of year when China’s churning economic engine sits idle.

Such thoughts are no help during the lunch rush, though. On Dec. 9, Baolong and his sister arrive at 11:22 a.m., two hours after their parents began work and about 15 minutes before the rush begins.

The restaurant’s patrons are primarily men who work with their hands: construction crews, delivery men and self-employed mechanics. Menu offerings are an Atkins adherent’s nightmare and a working man’s dream: large bowls of noodles and piles of white rice sprinkled with fried meat and vegetables.

The tables fill up, and orders echo off the walls. In the small kitchen tucked in the back of the restaurant, four family members move in an intricate choreography, handing off steaming bowls of noodles as flames dance around the wok.

Out front, Baolong laughs when the regulars tease him about his outfit (pleather on top and bottom, every day), and he dishes just enough back at them so they know he’s got it. Fangfang is quieter with the customers, but still commands the attention of her younger brother.

At 1 p.m., after an hour of unceasing activity, the restaurant empties just as suddenly as it filled up. Customers will drift in throughout the afternoon, but the next four hours will be the calmest of the day. 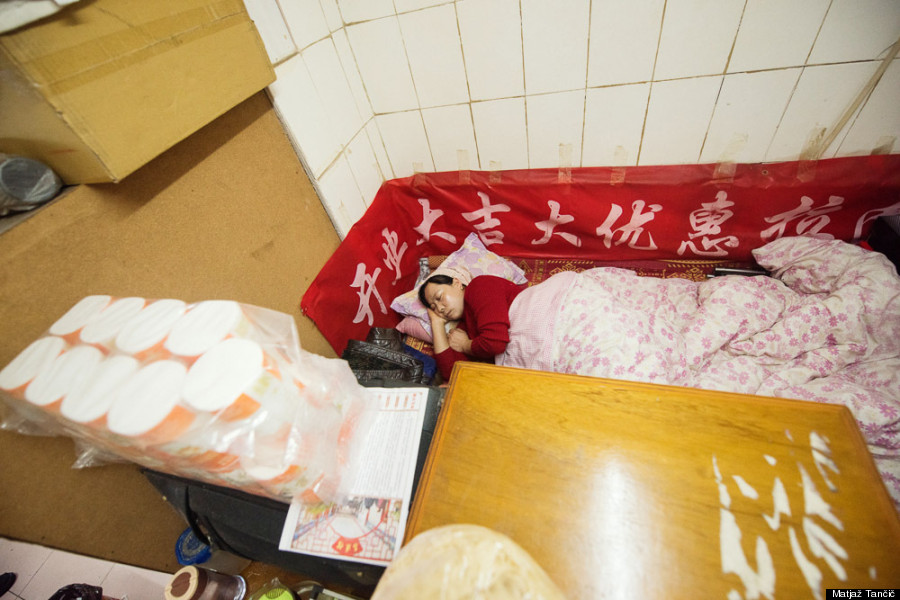 Baolong’s mother sneaks in an afternoon nap to break up the 15-hour day. (Matjaž Tančič for The Huffington Post)

As the midday crowd subsides, Baolong buries himself in cell phone games and Fangfang walks the one block back to the 12-by-12 room she shares with her brother. At night, both parents sleep on a cot nestled between the tables and the kitchen, and Baolong’s mother uses the afternoon lull to nap there while her husband and son handle any customers.

A Silicon Valley denizen might describe the Mao family as “serial entrepreneurs.” They’ve opened and closed about half a dozen restaurants in different cities. The current location is their third in Beijing. The previous two were bulldozed to make way for new construction, and this one will almost certainly meet the same fate.

“They say the neighborhood is gonna get torn down,” Baolong says. “If not this year, then next year. If not next year, then the year after that.”

Amid apartment towers and multistory buildings, the neighborhood is an anomaly in this part of Beijing — a two-block cluster of single-story dwellings that share walls and public restrooms. Narrow alleys between the shack-like homes open up onto small plots of total destruction: About a quarter of the homes in the area were bulldozed several years earlier by a developer who failed to finish the job. The caved-in structures now serve as open-air bathrooms and community gardens. 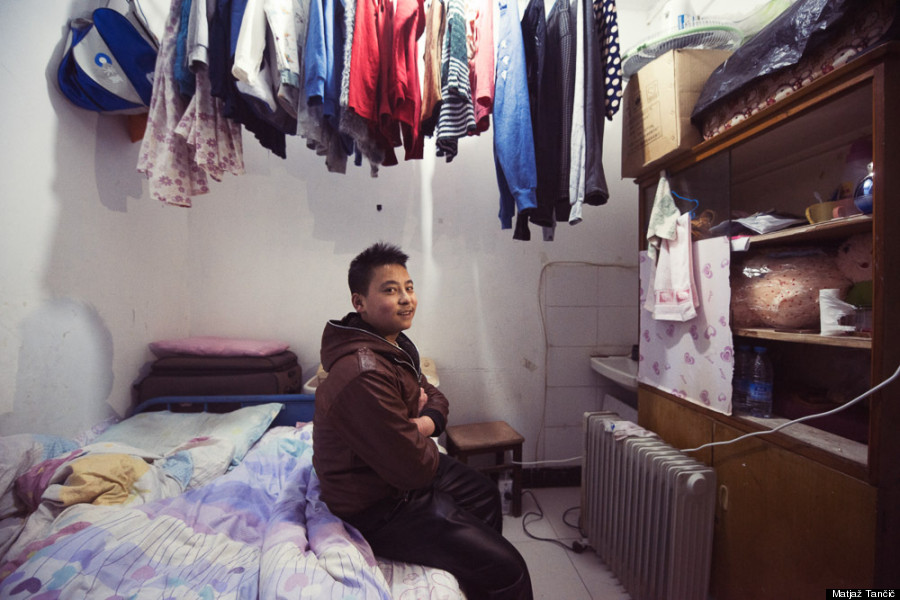 Baolong and his sister Fangfang share the one bed in this room a block from the restaurant. (Matjaž Tančič for The Huffington Post)

When the bulldozers reach the Maos’ latest restaurant, the family will likely pick up stakes and move to another location on the margins of Beijing society.

‘DO BLACK PEOPLE COME FROM AMERICA?’

Working in the restaurant means the Mao children don’t have to worry about the punishing preparation for China’s college entrance exam. But they also lose any chance to hang out with kids outside their own family. Baolong had one friend in Beijing, the son of a local street sweeper, but the boy has now returned to his home village. Given a day off, Baolong says he would love to visit the Beijing zoo.

The world outside these walls filters in by way of the always-on television and talkative customers. Those are narrow channels, and glimpses of far-off countries produce more questions than answers.

“Do black people come from America?” one member of the family wants to know.

“Are American cartoons in English or Chinese?”

“So Americans don’t really believe in any religions, right?” 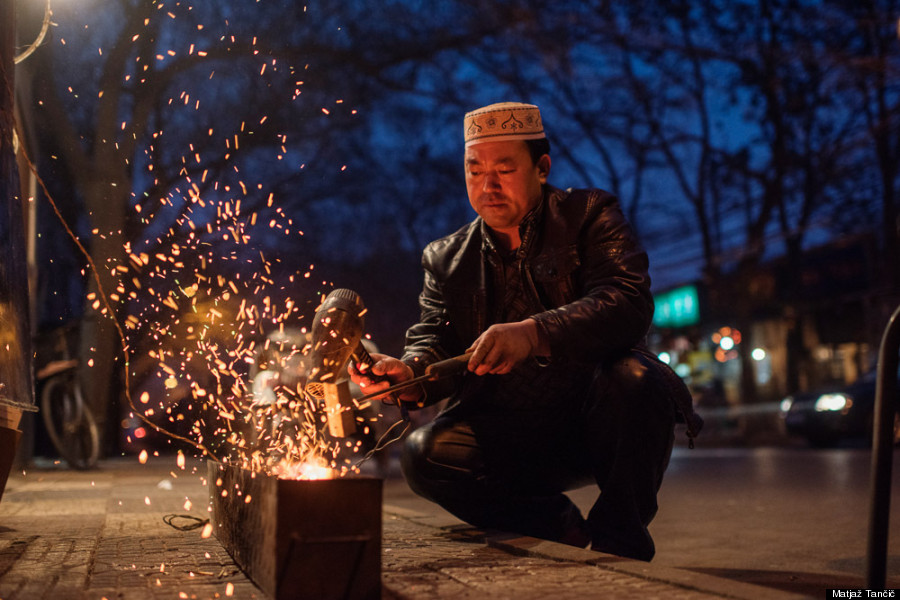 Fascinating as these questions are, the family has more pressing matters at hand. By 5:30 p.m. the restaurant begins to fill again with dinner customers and everyone is back at work.

Now Baolong gets to show off the two newest bullets on his resume: whipping dough into noodles and roasting lamb kebabs. The noodle strands he casts into the steaming cauldron are usable, but he can’t make the dough dance the way his father does. Trips to the outdoor barbecue mean braving the biting wind, and after he deposits the finished skewers, Baolong grips the room’s hot water pipes with both hands.

“When I first learned to barbecue, it’s all I wanted to do all day,” Baolong says with something between a smile and a grimace. “Now when I hear ‘kebabs,’ I just want to throw up.” 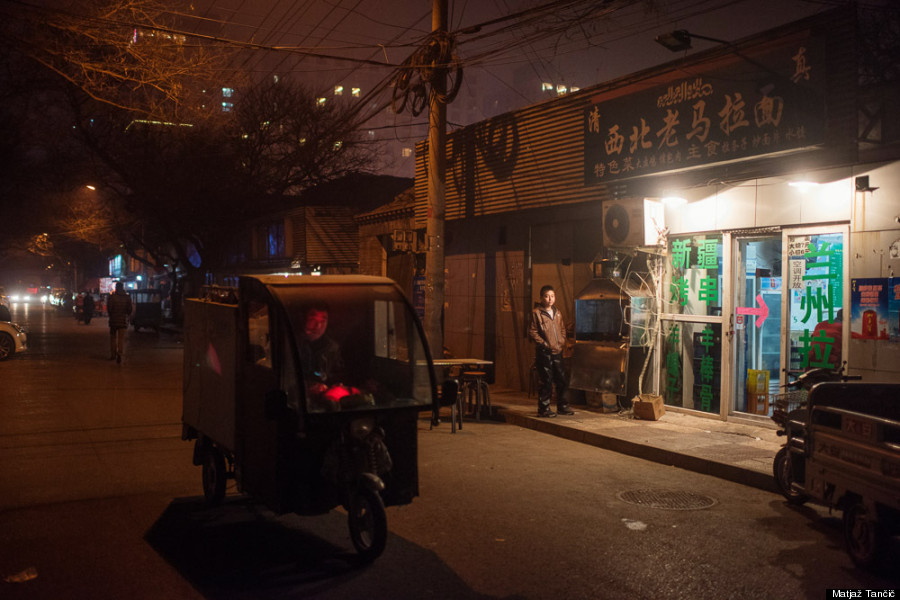 The restaurant on the night of Dec. 9, 2014. (Matjaž Tančič for The Huffington Post)

By 11 p.m. the customers are thinning out, and Fangfang and her mother sit around a table, skewering lamb and mulling over the next few years.

“Back at home, a lot of girls my age already have their families setting them up for marriage,” says Fangfang.

Her mother recalls how girls were pressured to marry between ages 16 and 19 when she was growing up. She’s decided to be more lenient with her daughter.

“When our friends come by, they’re already starting to say, ‘I know a really good guy to introduce to your daughter,’” she says. “But she’s still only 19, and I don’t think she can handle that kind of responsibility. We’ll wait until she’s 20.”

Baolong still has a few years before marriage prospects enter the conversation. His earning potential will weigh heavily in those calculations. For now, he’s playing his part and learning the fundamentals of the family business.

“Of course we’d have liked him to stay in school a little longer, but that didn’t happen,” his mother says while pouring water over the kitchen floor. “Now he’s in a big city like this and we hope he can find out something about himself, find out what he can do.” 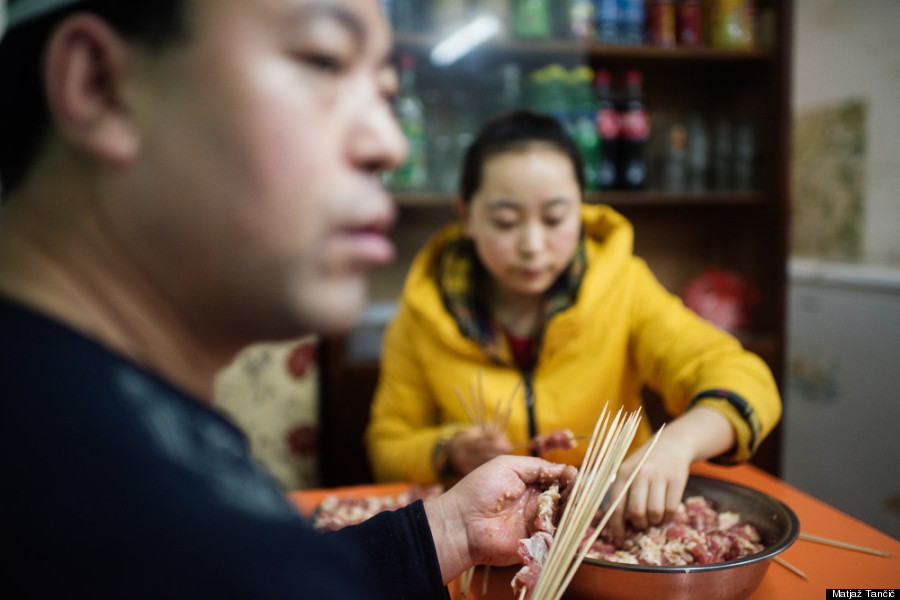 Fangfang and her father preparing lamb skewers. (Matjaž Tančič for The Huffington Post)

After midnight, Baolong’s other sister, Yufang, comes back from work at their cousin’s restaurant, and the family sits down together for the first time all day. They devour a massive plate of flat noodles and chicken, and the three kids clear the dishes, wipe down the tables and sweep up. When the kids say good night and head out, the parents are left hanging a sheet across the sliding glass doors.

At 1:18 a.m., 14 hours after it opened and 10 hours before it opens again, the front door to the restaurant is locked shut for the night.