ISTANBUL — Forty years ago, Istanbul University was a battleground for clashes between leftist and far-right student activists, leading up to the Turkish military’s brutal takeover in the 1980 coup. Now, it seems the spirit of revolt is back: Syria’s war has come to the classroom.

“Here is going to be a grave for ISIS!” dozens of students chanted one recent afternoon, referring to the militant group also known as the Islamic State. Fellow students stood up and applauded the battle cry.

Early that morning, leftist and pro-Islamic State students had — for at least the fourth time in two months — clashed so violently on campus that riot police were called to make arrests, adding names to a growing list of students who have been detained.

Students, furious at what’s happening just over the border in Syria and within their own country, have been hanging up political signs, staging sit-ins and rallies, and at times, attacking one another with weapons or their own fists.

In many ways, the situation at Turkey’s oldest university mirrors the broader tensions in the country, whose deep social, religious, and political divisions have only been exacerbated by the Islamic State’s rise. While President Recep Tayyip Erdogan, who previously served as the country’s prime minister for 11 years, easily won August’s presidential election, there has been growing discontent against Erdogan’s firm-fisted rule and his conservative, Islamist-leaning Justice and Development Party (AKP). 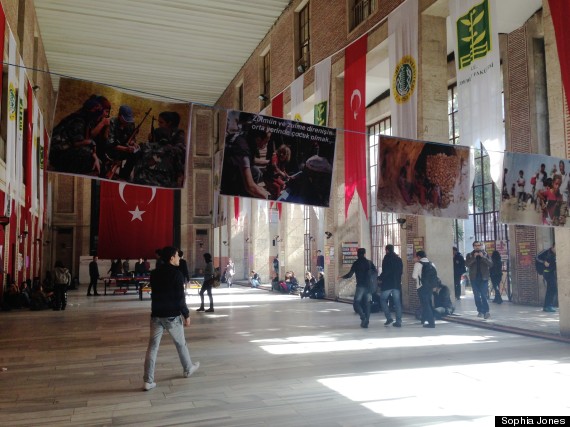 Pro-Kurdish posters in support of the besieged Kurdish town of Kobani in Syria hang at Istanbul University.

Turkey has faced criticism, from foreign governments and its own people, for failing to crack down on extremist groups operating in the country. The Islamic State often recruits new militants in major Turkish cities and uses the lengthy, relatively porous border as a portal for jihadists to enter Syria. In addition, many Islamic State fighters are Turkish.

The backlash against Turkey has intensified in recent weeks, following the government’s refusal to let Turkish Kurds cross into Syria to defend the border town of Kobani. Turkey has refused to intervene in the critical battle against ISIS just across its border, even as, much to Turkey’s dismay, a U.S.-led coalition has dropped weaponry into Kobani to aid Kurdish forces there. The Turkish state considers the Syrian Kurds defending the town to be part of a terrorist group, due to their ties with Kurdish militants who have battled Turkey’s government for three decades.

“We won’t allow fascists to take over,” a male student’s voice boomed in Istanbul University’s courtyard as students sipped hot tea and shared cigarettes. “They are killing Kurds with the support of AKP!”

The corridors at the university are lined with pictures of Syrian refugees and posters supporting Kobani’s Kurdish defenders. Only a few pro-Islamist posters hang, and other students often take them down. In a main hall littered with political fliers that serves as the heart of the university, students sat in a large circle last Friday. All eyes were on one middle-aged man sitting cross-legged, defiantly singing a traditional Kurdish song. 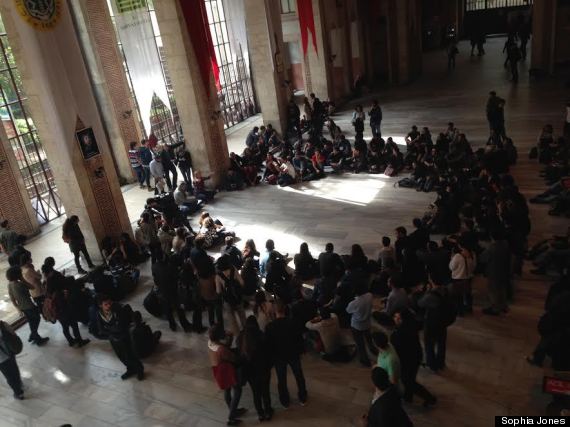 Students sit in a circle at Istanbul University on Oct. 24, 2014 while they listen to a man sing traditional Kurdish songs after a rally against the Islamic State.

Leftists on campus have clashed mostly with students belonging to a group that calls itself the Muslim Youth. In several episodes, which often coincide with anti-Islamic State events put on by leftist students, Islamist protesters have worn black masks and wielded bats and blades. A machete was reportedly found after one such fight. Islamist protesters often chant “Allahu akbar” (“God is great”) during these clashes.

The Muslim Youth turned down multiple interview requests by The WorldPost. Group members have written public Facebook posts — which have subsequently been deleted — that called for violent jihad and praised extremist groups in Syria. One notable Facebook post showed an image of a plane flying into the Twin Towers with text that read, “the future is in the skies.”

A Sept. 26 statement published by the group on an Islamist website accuses leftist students of using recent developments in the Middle East as a means to smear Islam. The group claims its members engaged in clashes on campus in order to defend their existence and values.

“As Muslim students, we see the global struggle of Muslims as our struggle as well,” the statement read. “If anyone will be called to account, it will not be those who wage jihad … It will be the collaborators and the so-called imperialists who find refuge behind NATO, the UN, and the U.S.”

According to an officer at the police station just next to Istanbul University, at least ten students were detained on Oct. 24 and sent to the main Istanbul police headquarters. Officers at the headquarters refused to give The WorldPost any information on the whereabouts or well-being of the students, instead saying, “mind your own business.”

Students at Istanbul University told The WorldPost they are afraid to come to school now. Some parents are asking their children to stay home.

Next to a main courtyard on campus, Ipek Firat, a 44-year-old student of Arabic language and literature, mans a desk covered in materials promoting the ideas of IBDA-C, an Islamist group that Turkey and the United States have designated a terrorist organization. Firat wholeheartedly defends the university’s Islamist protesters.

“I want to live under a state which has Sharia law,” she told The WorldPost at a nearby cafe. Firat believes stoning is a just form of punishment and that women should wear the full face veil known as the niqab — both rules that the Islamic State abides by. She also wants to see an Islamic caliphate in the region, which is the self-declared aim of the Islamic State. Yet Firat stopped short of supporting the extremist group, saying her views don’t exactly align and that violence should only be used as self-defense.

“The leftists want to generalize and stereotype me in one image, which is not right,” Firat said angrily. “They are mistaken that every person with a beard belongs in one profile, which, in this case, is ISIS. I shouldn’t be judged just because I support jihad.”

At a lunch table in the university dining hall, a group of female friends who are studying to become translators discussed the violence on campus. While the young women agreed that both the leftists and the Islamist protesters are to blame, they expressed greater sympathy for the Islamists.

“[The leftists] are the majority here,” said Nagihan Baydaroglu, 21. “Leftists can put up posters freely. But when the right reacts, the leftists restrict them.” 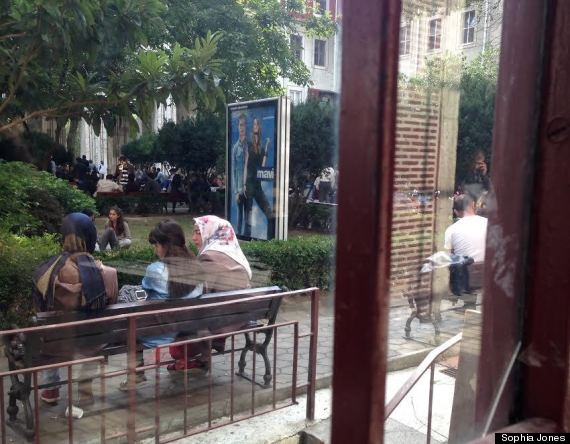 Students sit in a main courtyard of Istanbul University during their lunch break on Oct. 24, 2014.

Esia Durur, a 21-year-old with braces and a brown headscarf that matched her outfit, chimed in. “One side opposes whatever is happening in Turkey or what’s done by the government. The other side has a motivation. They have a belief, a cause.”

“Slowly, there is religious freedom in Turkey,” Durur said. She said she relates to the Islamist protesters and to a greater Muslim struggle. But, like her friends seated around her, she does not consider Islamic State fighters to be true Muslims.

“ISIS is just using Islam as an excuse,” she said matter-of-factly.

Regardless of their opinions of the extremist group, the young women all lamented what they described as a manhunt going on in Turkey as Islamist sympathizers are tracked down. The women said they didn’t want to become targets just because they are religious.

“A senior from my department got beaten because of his beard!” Durur said angrily.

“But sometimes I’m afraid,” she added quietly, as if admitting something she hadn’t quite come to grips with yet. “I’m afraid when a bearded man gets on the bus. I’m afraid he’ll detonate a bomb.” Burak Sayin contributed reporting from Istanbul.