By Crossing The Line In Ukraine, Putin Fortifies It Everywhere Else

All bets are off if Russian nukes enter the picture. 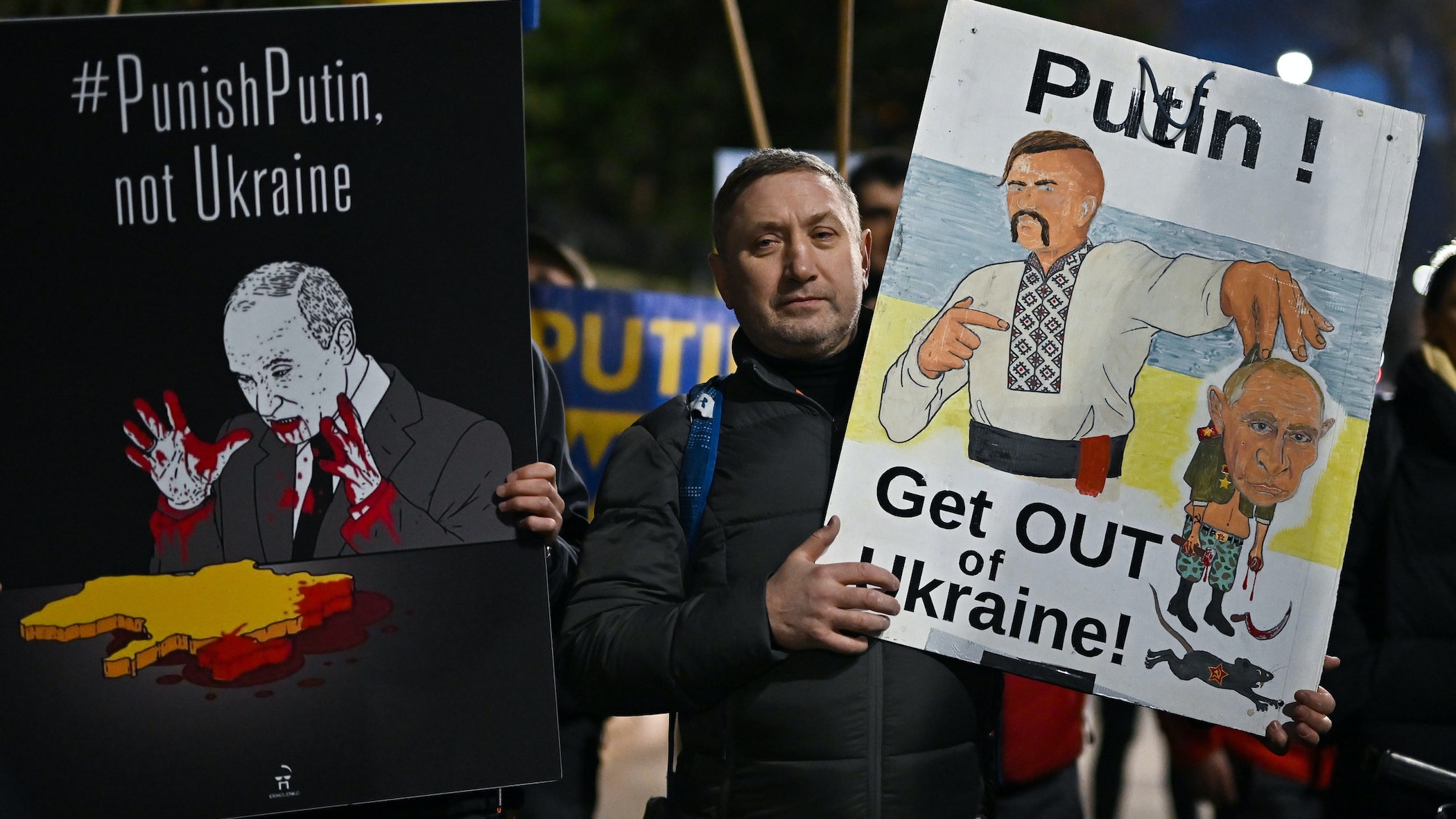 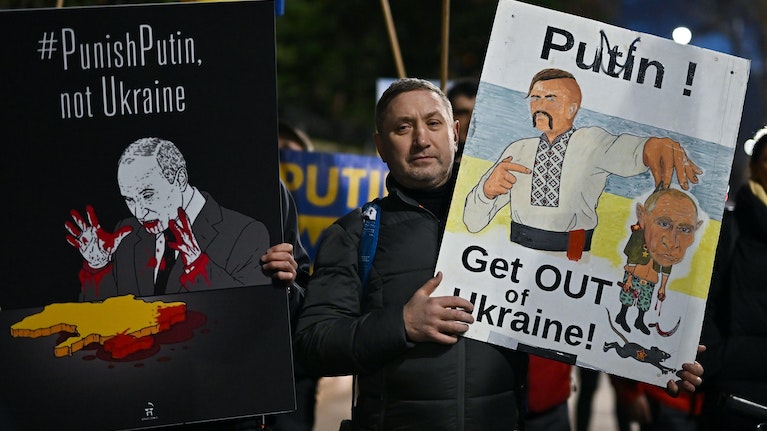 A demonstration against the invasion of Ukraine outside the Russian Embassy in London on Feb. 23 (Jeff J. Mitchell/Getty Images)
Credits

Clearly, the Russian invasion of Ukraine is a defining moment in history. What that definition will be remains unclear.

It could be wishful thinking at such an early stage, but it may turn out in the end to be the opposite of what we’ve immediately supposed. Instead of the invasion dealing the final blow to a wobbly rules-based global order, it may, paradoxically, have strengthened it. By crossing the line in Ukraine, Russian President Vladimir Putin may have reinforced it everywhere else.

By going a step too far, the Russian president has broken the momentum of all those on the same track of aggressive nationalism. Far-right fans of Putin in Europe, such as Éric Zemmour in France or Matteo Salvini in Italy, have hurriedly sought to distance themselves from what all can now see as the ultimate consequence of their brand of politics. In the U.S. too, Donald Trump and Tucker Carlson are scrambling to save face while putting their tails between their legs.

Even sympatico autocrats like Hungary’s Viktor Orbán can’t abide the very kind of transgression that first drew him into politics in 1989 when, as a young man, he demonstrated for the withdrawal of Soviet troops from his country.

Putin’s misguided gambit has prompted a long-reticent Germany to dramatically change course, moving this week beyond its World War II guilt complex, agreeing to send lethal weaponry to fight the Russians in Ukraine and boosting defense spending going forward. More broadly, the unexpected shock of the invasion of Ukraine has, as Samuel Huntington said of the 9/11 attacks, “given back to the West its sense of common identity.”

Above all, Putin’s invasion is straining the common bond that was being forged with China against the Western-framed world order. As former Australian Prime Minister Kevin Rudd put it, the attack on Ukraine has put Chinese President Xi Jinping in an “impossible balancing act.”

Putin shares Xi’s abhorrence of the idea of universal values, a free civil society, an independent judiciary and Western-style constitutional democracy. As conservative traditionalists, they have both sought to resist “spiritual pollution” from the West, condemning the decadence symbolized in their minds by gay rights or the effeminate appearance of K-pop bands like BTS.

But mostly they share a security concern of hostile Western military alliances approaching their country’s borders. Leading up to this war, the Chinese made clear their support for Russia on that front. But, in the same breath, they always enunciated China’s paramount principle of international relations: non-interference and the sanctity of sovereignty and territorial integrity.

On that critical score, it looks like Putin lied to Xi just as he lied to French President Emmanuel Macron and German Chancellor Olaf Scholz, misleading them about his intention to invade Ukraine. By first recognizing the independence of the contested zones in eastern Ukraine, and then pouring troops across the border of a sovereign nation, Putin raised the specter China most fears — the recognition of Taiwan as a breakaway state from “one China” and the de facto sanctioning of outside intervention in its internal affairs.

When the United Nations Security Council met this weekend to condemn the invasion, China abstained — the equivalent in this context of a vote against its erstwhile geopolitical partner.

How far that breach will grow is yet to be seen. The expectation for the moment is that China will have Putin’s back in softening the impact of Western sanctions. But whether that holds depends on how protracted and brutal the Russian incursion turns out to be. It already upends China’s global narrative that the U.S. has been most responsible for world disorder with its steady stream of wars and interventions in the Middle East and North Africa. For China, the only thing more disruptive than war in Asia itself is war again in Europe.

In a conversation earlier this week, the great historian of Eurasia Wang Gungwu reminded me of the long history of distrust between Russia and China only occasionally marked by short marriages of geopolitical convenience. China always looks out for its own interests first and no sentiment is lost when the relationship becomes inconvenient.

In many ways, China’s stance going forward may play a greater role in stabilizing the situation than a unified NATO, which cannot lift a finger inside Ukraine without inviting escalation to a nuclear standoff with Russia. The limits of what an ever more isolated Russia can do with impunity will be largely influenced by what China can accept.

Putin’s rants about neofascists and drug addicts having usurped power in Kyiv as the proximate cause of placing most of his armed forces into battle suggests he may have fallen into some kind of COVID-isolation delirium. One has to suspect that such alarming behavior is giving pause among elements of the Chinese leadership about granting such unlimited power to one man at the helm. What if, under China’s “zero-COVID” isolation, Xi, too, goes off the rails?

In his seclusion, Putin surely often gazes out onto the statue near the Kremlin of Vladimir the Great, considered the founder of Russia when he ruled from Kyiv in the late 10th and early 11th centuries, and sees the reflection of his own destiny. Absent outside reality checks, the all-powerful president seems to have convinced himself it was upon him alone to fulfill the messianic prophecy of his favored philosopher, Ivan Ilyin: “We trust and are confident that the hour will come when Russia will rise from disintegration and humiliation and begin an epoch of new development and greatness.”

The historic question today is whether that hour, which has arrived for Putin, will turn the clock forward or backward for the rest of us.

If Putin’s unhinged adventurism leads to a dead end and he feels trapped, the possibility he might turn to Russia’s vast nuclear arsenal, already on heightened alert, can’t be dismissed. Then all bets are off. The Doomsday Clock would tick closer to midnight than at any other time since the Cuban missile crisis more than half a century ago.