SAN FRANCISCO — Fifteen minutes before the first show of its American tour, China’s biggest indie rock band, Carsick Cars, has one fan and a broken amp. The show is a free concert held on a small stage in the corner of Amoeba Music, a record store in San Francisco’s Haight-Ashbury neighborhood. Carsick Cars, a Velvet Underground-inspired guitar-bass-drums trio, is fresh off a flight from Beijing, and the fickle microphone equipment appears as jetlagged as the band.

Having just finished its biggest Chinese tour to date, Carsick Cars embarked on a grueling blitz across the U.S. and Canada: The band is playing 25 shows in 25 days, driving about 6,500 miles in the process, to promote its newest album. The tour will culminate with three New York shows at the end of the week.

“This is the biggest and by far the most ambitious tour we’ve done, and it’s going to be the most intense,” Charles Saliba, manager and lead roadie for the band, told The WorldPost. “The only way to make any money in this industry is to work it, to hit the road.”

With college students and young artists packing the band’s concerts in China, Carsick Cars has become an ambassador for a Beijing indie rock scene that flourished over the last decade. Much of that growth has been the direct result of evangelism by prominent China-focused economist Michael Pettis and Charles Saliba, who co-founded two Beijing music clubs and the indie label Maybe Mars. The clubs and record label have served as incubators for a growing roster of local indie bands that are just starting to make waves outside China. 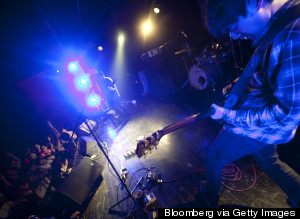 “We’re very much in the beginning of getting people to know Beijing has a music scene,” Pettis said. “Musicians know it and people in the music industry know it, but nobody else does.”

If one Chinese indie band has a chance of grabbing the attention of music fans outside the country, that band is Carsick Cars. It has already made multiple trips across the Pacific, and as early as 2007 it opened for the pioneering alternative rock group Sonic Youth in Europe. Combining frontman Zhang Shouwang’s peppy but dissonant guitar riffs with rapid-fire drums and bass, Carsick Cars has built up a sizable following in China and overseas since its founding in 2005.

Back at Amoeba Music in San Francisco, Zhang and his bandmates fiddled with amps and plucked at cables while a growing audience filled out the aisles surrounding the stage. By the time the band eventually struck its first pulsing power chord, the room was populated by dozens of local fans who received their Chinese indie baptism on the band’s earlier American tours. Lively follow-up shows in Oakland and San Francisco’s Mission District, including a double-feature with Zhang’s experimental side-project White+, showcased the group’s growing appeal in American hipster havens.

But as the band makes a name for itself on foreign shores, it often finds itself corralled into the exotic artist-dissident category in western imaginations. Observers and art critics outside of China tend to focus attention on anti-government Chinese artists like Ai Weiwei as much for their politics as their creative output. Carsick Cars’ music was featured in an American documentary about Ai Weiwei, and while the association may help the band gain fans outside of China, it can also warp perceptions and expectations.

“I think it’s a stereotype that people in the West have about China, that life is just a struggle with politics, and it’s kind of like racism on some level,” Zhang lamented. “You never ask German bands why they don’t write songs about politics, but people think us Chinese have to deal with politics all the time. We’re living in a big city; we have the same lifestyle as people in San Francisco.”

Questions about whether the group’s music is sufficiently “Chinese” meet with a shrug from musicians who came of age idolizing obscure 1980s New York “no wave” artists. Dressed in black jeans and plain T-shirts, the members of Carsick Cars look perfectly at home in San Francisco’s Mission District.

All still in their 20s, the band members were among the first Chinese musicians to grow up with a digital direct-line to the entire smorgasbord of international rock music. That sets them apart from early Chinese rock pioneers like Cui Jian and P.K.14, all of whom had to scrounge for tapes or vinyl of their favorite foreign bands. 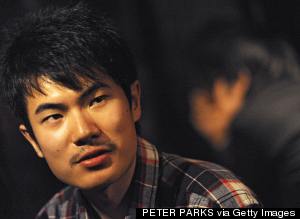 Zhang Shouwang, pictured here in 2008, says that none of his band members could play their instruments when they formed Carsick Cars in 2005.

Love of American punk and alternative rock is what first brought Carsick Cars together: the band’s original three members, all students at a Beijing university, connected via an online post seeking out fellow fans of Sonic Youth. All three bandmates, two of whom left the band in 2010, were new to their instruments at the time, and Zhang says their early songs were essentially “a lot of feedback.” But that refreshingly wrenching sound soon turned into their 2007 debut album and a regular spot on a small Beijing live music circuit.

“People ask me why so many Chinese young people like Carsick Cars now, and I think it’s because when we first started we really didn’t know how to play our instruments,” Zhang said. “Maybe it gives Chinese kids some hope that they can make music and start a band.”

Infusions of rock and roll values serve to set counter-culture Chinese youth apart from their more traditional peers. For most Chinese men, young life is defined by the pursuit of two economic prerequisites for marriage: a car and an apartment. Participants in Beijing’s underground music scene have found a way to loosen the vise-like grip on imagination.

“Our values are a whole lot different from most young people in China,” bassist He Fan said. “Ordinary young people have to take on different responsibilities, things that just aren’t that important to us. For a lot of other young people it’s all about getting comfortable.”

Though the band is not part of the mainstream culture in China, the pull of its music is clear from its raucous audiences in Beijing and the fawning comments from international fans on YouTube. Carsick Cars is scheduled to perform in May at the Beijing Worker’s Stadium, home to the city’s pro-soccer team and by far the band’s biggest show to date. Asked about the future, Zhang predicted that Chinese indie music would follow the path of New York punk by slowly merging into the mainstream.

“The punk scene in New York very quickly became fashionable, and I think the same thing is happening in China,” Zhang said. “Since the Olympics you’ve had so many companies paying attention to the music scene and trying to grab onto youth culture. I think that’s the future. Kids can’t just listen to really sh***y pop music all the time.”