HONG KONG –- Protests in Hong Kong’s Admiralty neighborhood have been a boisterously youthful affair, often giving the feeling of an extended sleepover celebrated with songs and documented by selfies.

But 200 meters from the festivities sits Benny Mok, a friendly 51-year-old diabetic man on the sixth day of a hunger strike. He carries a walking stick rather than one of the umbrellas that have become the emblem of Hong Kong’s democracy movement, and at Mok’s camp, the closest thing to a selfie is the newspaper clip showing him kneeling in front of a line of riot police. Mok says the picture was taken just minutes before the riot police delicately rolled a teargas canister out on the ground in front of him.

Asked how the tear gas felt, Mok couldn’t hold back a joke.

“We pay good taxes, they buy good quality,” Mok told The WorldPost while descending into a fit of chuckles. “Sorry, sorry, I need to make jokes because it distracts me from the feeling of hunger.” 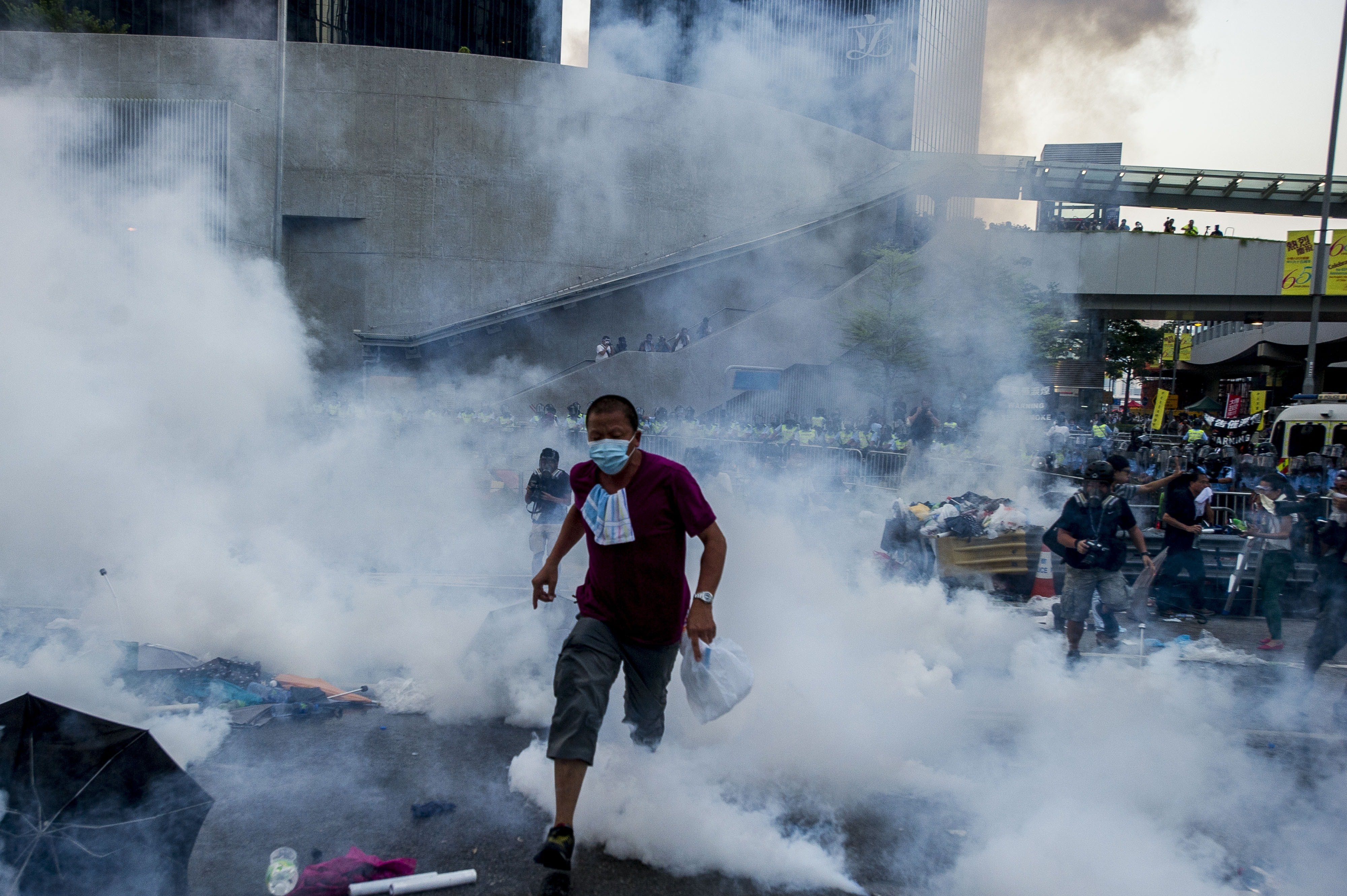 After watching the tear gas launched at students and getting a heavy dose himself, Mok decided he would embark on a hunger strike in support of the student-led pro-democracy demonstrations for reduced interference from mainland China in Hong Kong’s elections. Last Thursday he set up camp outside the government headquarters, pledging to refuse food until the government engaged him in a dialogue on its election plan or until he physically collapsed. At the time, Mok predicted that his diabetes would drain his energy after three to four days, but as of Tuesday afternoon he was well into day six. He says his gesture is intended to shift the battleground in ongoing democracy demonstrations.

Mok’s generation forms a bridge between the fresh-faced students occupying city streets in pursuit of political freedoms and an older generation that knew real hunger and that prizes social stability. His parents fled the slaughter and starvation that ravaged their home province during Japan’s World War II invasion of China. Mok was born in Hong Kong in the years following Chinese famines that killed tens of millions and drove hundreds of thousands of mainland refugees into the British colony. His parents moved back to a quiet town in neighboring Guangdong province after retiring, and Mok is trying to keep them from learning about his hunger strike for fear of upsetting them. 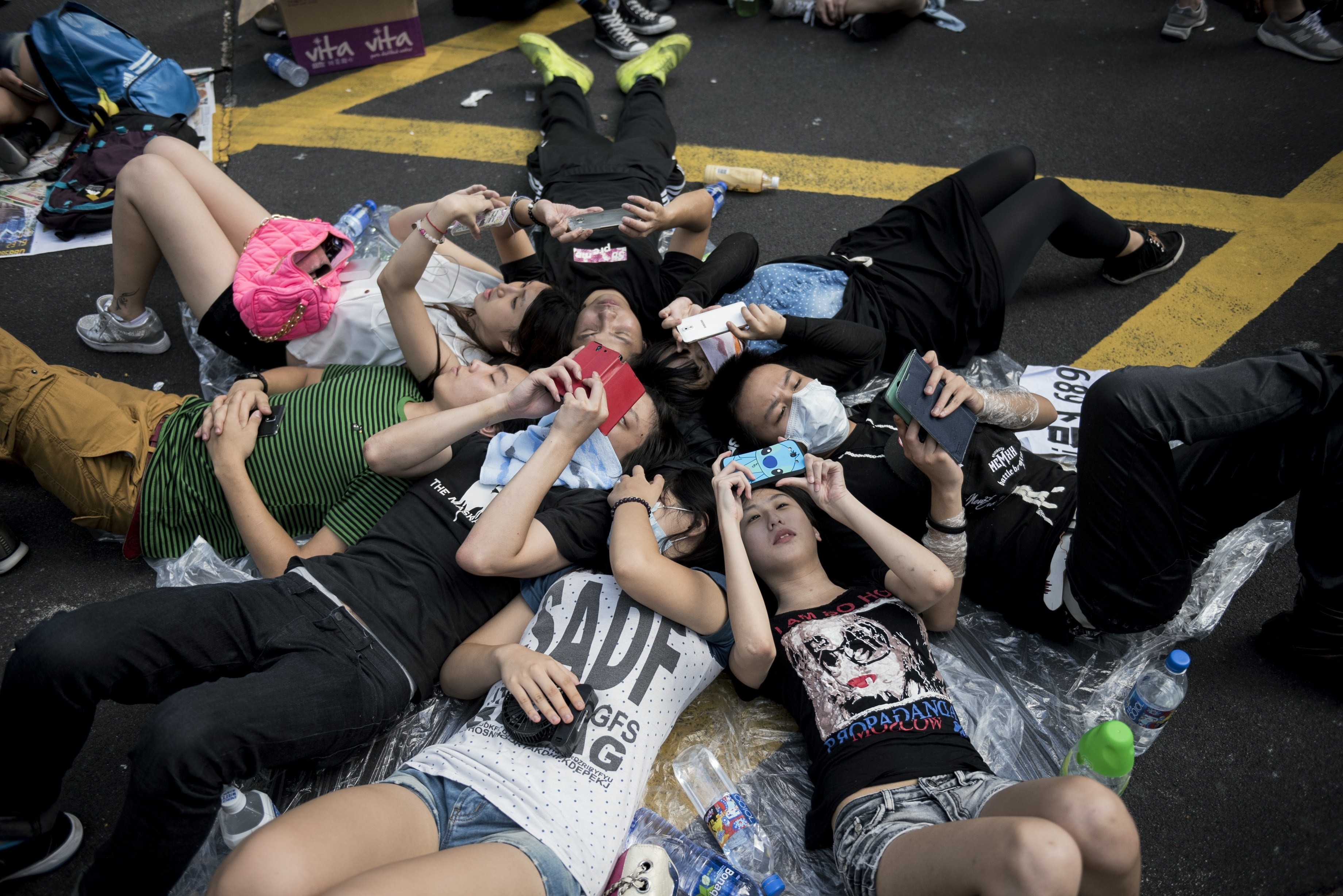 After college, Mok went to work in local government and now conducts food safety and environmental audits between Hong Kong and mainland China. He says that a rising economic tide kept his generation from pushing for democratic reforms, either under British colonial rule or after Hong Kong’s return to China in 1997.

“We had a social ladder to climb up and we were hypnotized by that dream,” said Mok. “We believed that if we could make our family lives better, not the society or the community, we could move up to some top levels and make changes. But sorry, that was a dream.”

Hong Kongers have never been completely silent on political issues: Every year since 1989, Hong Kong has been the site of large vigils to commemorate the Tiananamen Square massacre in Beijing, and the city has held annual rallies on the anniversary of the handover to mainland China. But looking back, Mok is critical of the way his generation voiced their grievances.

“We just asked for political rights in a leisurely way for 30 years, singing and lighting candles like a birthday party,” said Mok. 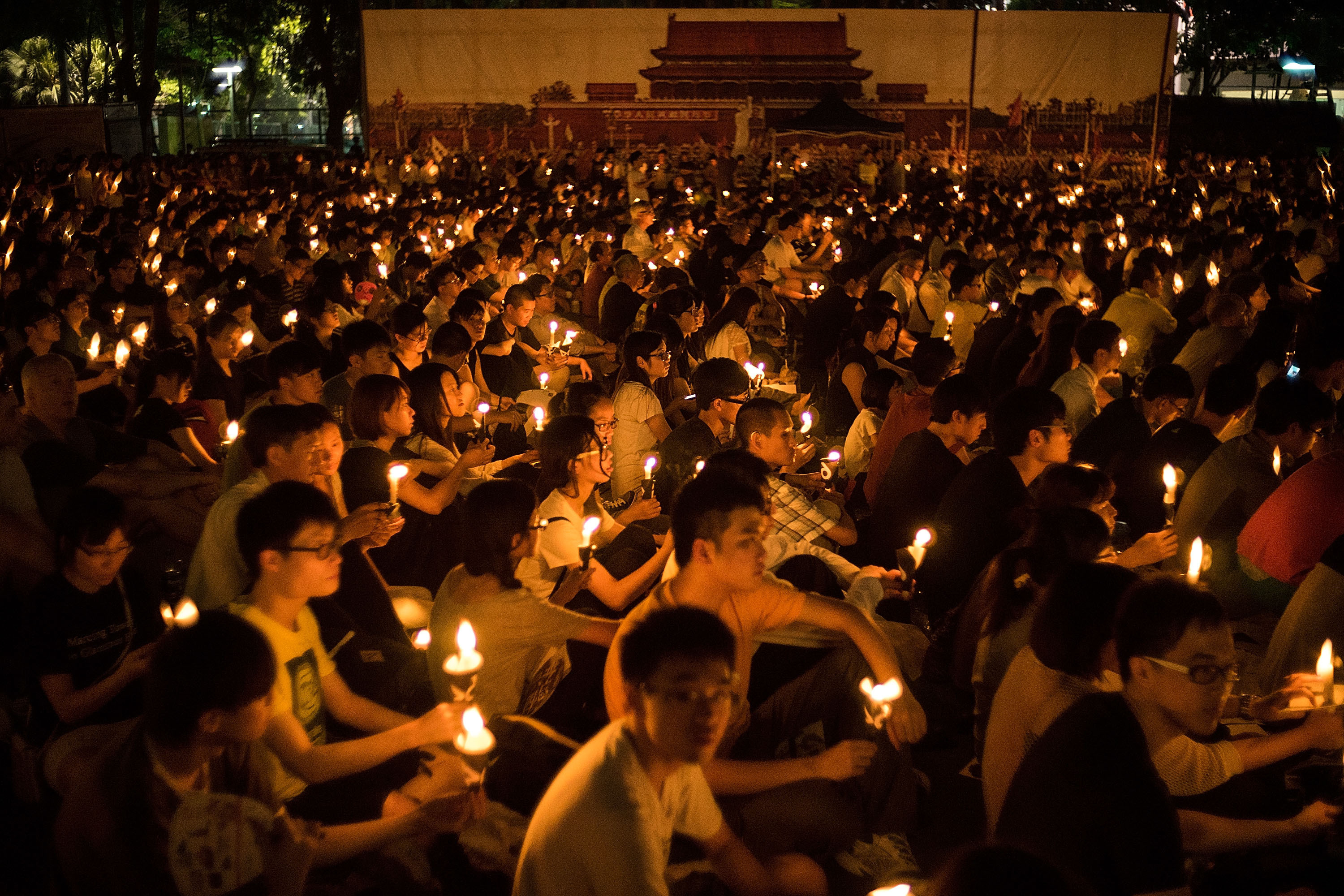 Hong Kong has faithfully commemorated the Tiananmen Square massacre each year, but Mok faults his generation for relying on vigils and songs rather than aggressive action. (Lam Yik Fei via Getty Images)

He said he is motivated by issues of wealth inequality and environmental degradation, and sees democracy as a tool — yet to be tried — to alleviate these problems.

“We need to give at least one chance for democracy,” Mok said. “I am an environmental man; I believe in biodiversity and that we have to coexist with evil things. Democracy will also bring its own defects, but I think we need to give it a chance.”

Though he’d been planning to participate in protests since discussions began one year ago, Mok felt the pull to do something more after witnessing the bravery of students who led the charge.

“I see the new generation has got guts and they’ve got their thinking clear. That moved me a lot,” Mok said. “I need to protect them because that’s our duty as adults: to protect the youngsters.” 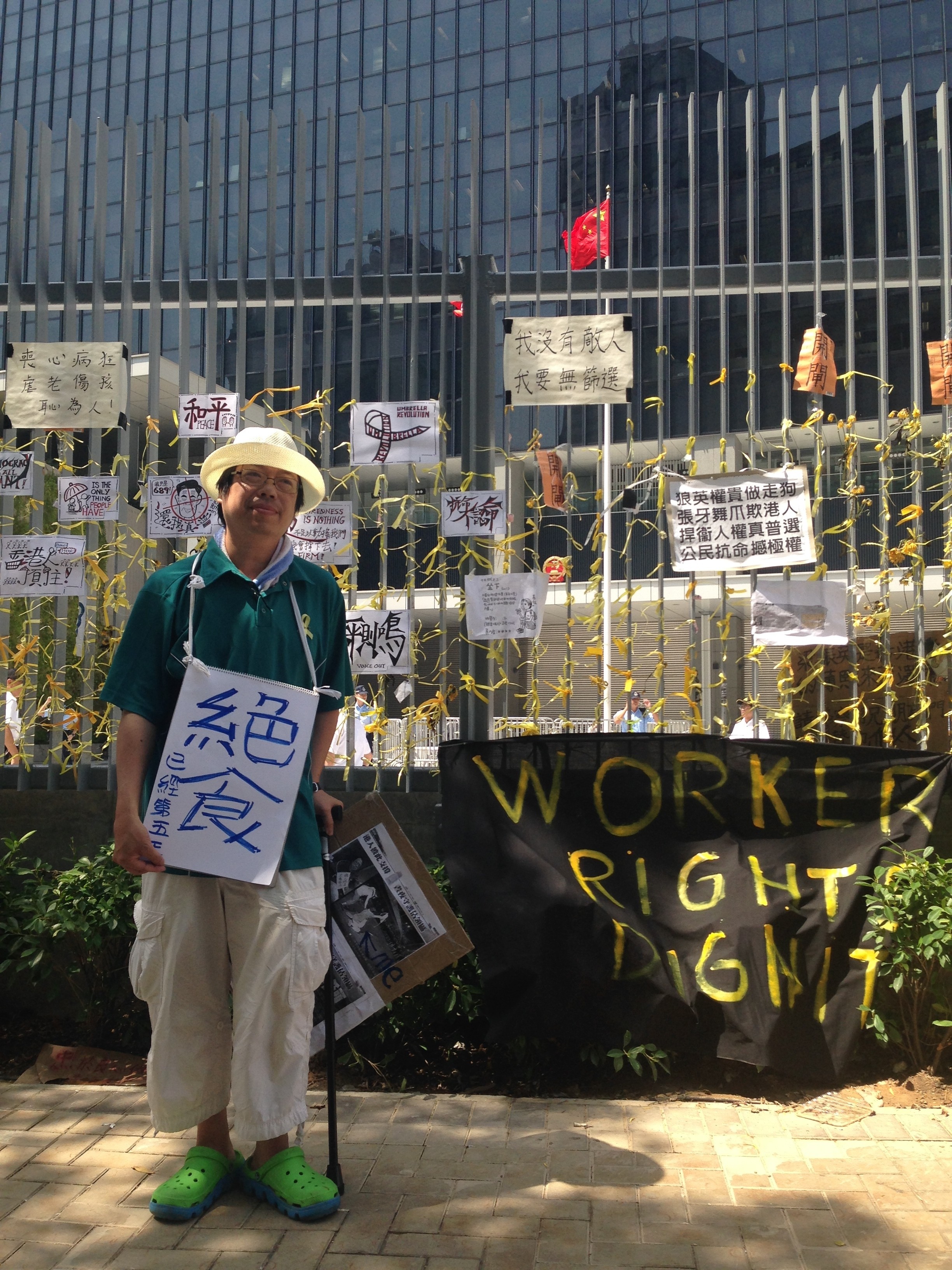 That urge to protect is what drove Mok to confront riot police after they used tear gas on students demonstrators. Before taking up his kneeling position in front of the riot police, Mok removed the protective masks used to guard against tear gas and pepper spray.

That smile may be edging toward a grimace as the hunger strike drags on, but Mok says he feels at peace.

Mok spends his days facing the government headquarters, a building now guarded by a metal fence decked out with yellow ribbons and signs of support for the ongoing occupation. His day is speckled by conversations with young protestors and visits from supportive colleagues like Peter Wong, who delivered an inflatable mat to ease Mok’s time sitting. Asked for his reaction to seeing his colleague on hunger strike, Wong’s voice took on a tinge of anger.

“Disappointed and happy,” said Wong. “Disappointed about this government and happy that we still have this kind of person who strives for freedom for Hong Kong people.”