“You declare that you are a member of the U.S. Army,” a young Turkish man says to one of the sailors in a video posted to social media. “And now because we define you as murderers, as killers, we want you to get out of our land.”

The hypernationalist group the Turkey Youth Union (TGB) claimed responsibility for the attack, posting photos of the incident on its Twitter page and website.

Footage of the attack on U.S. sailors in Istanbul posted to YouTube on Wednesday.

The sailors were part of the USS Ross naval crew. The ship arrived in Istanbul for a port visit on Sunday.

In the video, the group members hold up a Turkish flag and a flag showing the TGB emblem as they shout, “Go home, Yankee.” Members of the group also sprayed red spray paint on at least one of the sailors.

“We respect the rights of people to express their views freely,” a U.S. embassy spokesperson in Turkey who was briefed on the incident told The WorldPost on Wednesday. “But this type of behavior is deplorable.”

According to the spokesperson, the sailors who were attacked planned to give statements to the police.

“We hope appropriate action will be taken against the perpetrators,” the spokesperson said.

According to Olgu Özdemir, the secretary-general of the Turkey Youth Union, police forces detained 12 members of the group following Wednesday’s attack, but they were released on Thursday afternoon.

“The prosecutor will start a lawsuit against us for causing a public disturbance and violating personal rights and freedoms,” he told The WorldPost by phone on Thursday.

“We have enjoyed a strong relationship with Turkey for many years,” the statement read. “As NATO allies, we share common interests, and this incident will not diminish that strong relationship. Turkish ports have long been very popular destinations for U.S. Navy ships, and our Sailors have enjoyed the warm hospitality that has traditionally been extended.”

The statement added that the three sailors managed to flee the scene unharmed and are safely back on the USS Ross.

This is not the first time TBG has attacked Americans serving in the armed forces. In 2011, alleged members of the group attacked an American service member in the southern city of Bodrum, cloaking his head in a white sack. Turkish media pointed out an incident known in Turkey as the “hood event,” in which U.S. soldiers captured and interrogated Turkish forces in northern Iraq in 2003, placing sacks over their heads.

The TBG is known for its sometimes violent anti-American sentiments, and the U.S. Embassy in Ankara has previously put out warnings to citizens when TGB protests are planned in Turkey. 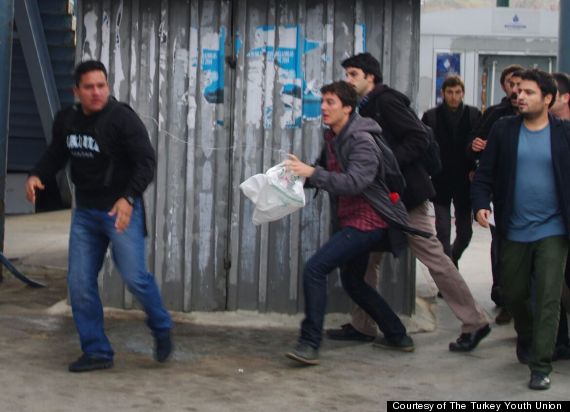 A young man runs with a white sack used in a hyper-nationalist attack on U.S. sailors in Istanbul on Wednesday.

In the video of the attack, the sailors do not appear to initiate fighting or fight back. Instead, they put up their hands defensively and appear to try to remove themselves from the situation.

The incident comes at a time when U.S.-Turkish relations are greatly strained, and the United States has pressed NATO ally Turkey to play more of an active role in fighting the Islamic State.

But Turkey — home to Islamic State recruiting cells and smuggling routes — is decrying the U.S. focus on battling the extremists but not the Syrian regime. Turkey has also slammed the U.S. decision to airdrop weaponry to Kurdish fighters in Syria who are aligned with a Kurdish group that has fought the Turkish state for three decades.

This story has been updated with statements from the U.S. Navy and the Turkey Youth Union.Burak Sayin contributed reporting from Istanbul.