Though Japan was the first Asian nation to blaze a path to modernization and prosperity after the war, it has remained a protectorate of the United States and a political dwarf relative to its industrial prowess and clout in the top ranks of the global economy. Seven decades after it surrendered to the Allied Forces, it is time for Japan to re-Asianize and come into its own as a fully sovereign nation.

Of course, Asia today is not the same as when the empire of Japan could dominate its weak neighbors through colonialism and aggression in the early and middle years of the 20th century. As never before, China and Japan today are major powers at the same time.

To re-enter this new neighborhood as a “normal power” in the future, Japan must first come to terms with its past. What makes Prime Minister Shinzo Abe’s revamping of the U.S.-imposed pacifist constitution so provocative is not the measured return to the standard military posture of any sovereign state, but the fact that Japan’s reticent official expressions of remorse have not been convincing to any of its neighbors, including other democracies such as South Korea. Though Prime Minister Abe has wisely avoided visiting the Yasukuni Shrine, which enshrines the souls of the war dead, in the past two years, the image embedded in the consciousness of the region is that of his 2013 visit.

Despite the manifestly evident peacefulness of Japanese society for the last 70 years, the wounds of war remain fresh because they are part of the founding identity of modern Asia’s nation-states. The present political institutions from Singapore to Korea to China were all established by those who resisted Japan and colonialism. The late Lee Kuan Yew, to take one example, often expressed a widely held sentiment in the region. To allow Japan to rearm, the Singapore statesmen known for his clear realpolitik views, once told me, “is like giving a drink to a recovering alcoholic.”

Though the re-Asianization of Japan will take another generation of maturing and distancing emotional adjustment as well as practical cooperation with former enemies, the place to begin now is for Prime Minister Abe to complement his constitutional revision with an equally bold gesture of remembrance and apology for Japan’s colonialism and aggression.

I happened to be in Tokyo last March when German Chancellor Angela Merkel visited. Her advice to Prime Minister Abe was to convincingly demonstrate the kind of remorse Germany has, which has enabled peaceful integration on a continent that suffered two devastating wars in one century.

When then-German Chancellor Willy Brandt fell to his knees and wept at a site memorializing the victims of the Warsaw ghetto uprising in 1970, he was not humiliating but rehabilitating his nation. In his memoirs, Brandt recalled that moment: “As I stood on the edge of Germany’s historical abyss, feeling the burden of millions of murders, I did what people do when words fail.” 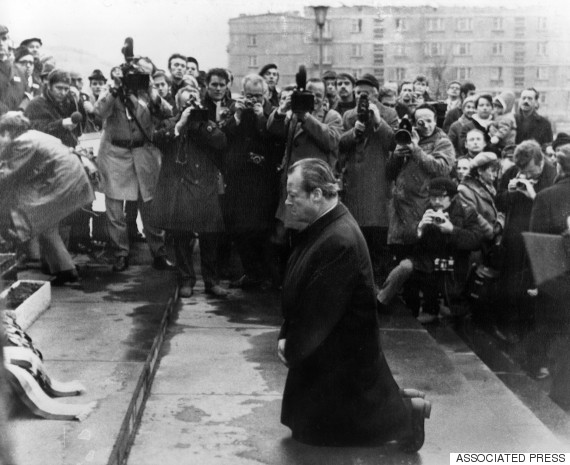 More than any excruciatingly constructed phrases aimed at apologizing to those who have been historically harmed but yet not offending Japanese nationalists — and thus not at all convincing — a simple, honest gesture such as Brandt’s would speak volumes and melt emotions frozen in time.

None of this is to excuse the bigotry of others, such as China, which demands that Japan come to terms with its past, but shies away from acknowledging its own, such as the famine during the Great Leap Forward or Tiananmen Square.

The stakes are high. The world is on the brink of dividing anew into a bloc system —with Japan on the front lines. While the United States is loathe to recede from a dominating role in East Asia or cede more say to China in global institutions, the revived Middle Kingdom is constructing its own alternative system of security alliances, trading routes and financial and monetary arrangements.

For the U.S. and Japan to cast the proposed Trans-Pacific Partnership as a way to contain China, as Prime Minister Abe and President Obama did when Abe visited Washington last spring, is a big mistake taking us down the wrong path. As Yoichi Funabashi has argued:

It would be a big mistake to exclude China from this proposed free-trade pact. Including China, perhaps in a later stage, will bolster those who support China’s “opening up and reform” policies against the forces of fledgling nationalism in the military and elsewhere.

By inducing China to reduce the role of its state-owned enterprises as a condition for joining TPP, we can help China avoid “the middle income trap” and further empower the growing middle class that will be an ally for a continuing “peaceful rise” and against counter-productive aggressive behavior.

This is the most crucial strategic bridge we can build with China. It is the greatest deterrence.

For China’s part, it must accept a vision for East Asia in which America retains a stabilizing, though not dominant, role — as it has since the Russo-Japanese war of 1904-1905 when U.S. President Teddy Roosevelt was awarded the Nobel Peace Prize for mediating the conflict — and in which Japan is confident of its security. Both Japan and the U.S. must understand, as Singapore’s former Foreign Minister George Yeo has put it: the rest of Asia might be America’s friend, but it cannot be China’s enemy. Here Zbigniew Brzezinski’s idea of a “Pacific Charter” like the Atlantic Charter with Europe should be taken seriously.

What Japan does now, given the heightened attention China is assigning the 70th anniversary of the end of the Second World War, will be a pivotal factor in whether a new era of confrontation or cooperation unfolds.

As hard as it is to imagine Prime Minister Abe following Willy Brandt’s example, Japan’s choice at this historical moment is to save face falsely over past sins and let tensions in the region simmer, or face the facts squarely so it can move beyond the past and embrace a promising future for all of Asia.