The potency of ubiquitous outdoor corporate advertising has sparked a vibrant movement to reclaim our streets through art. 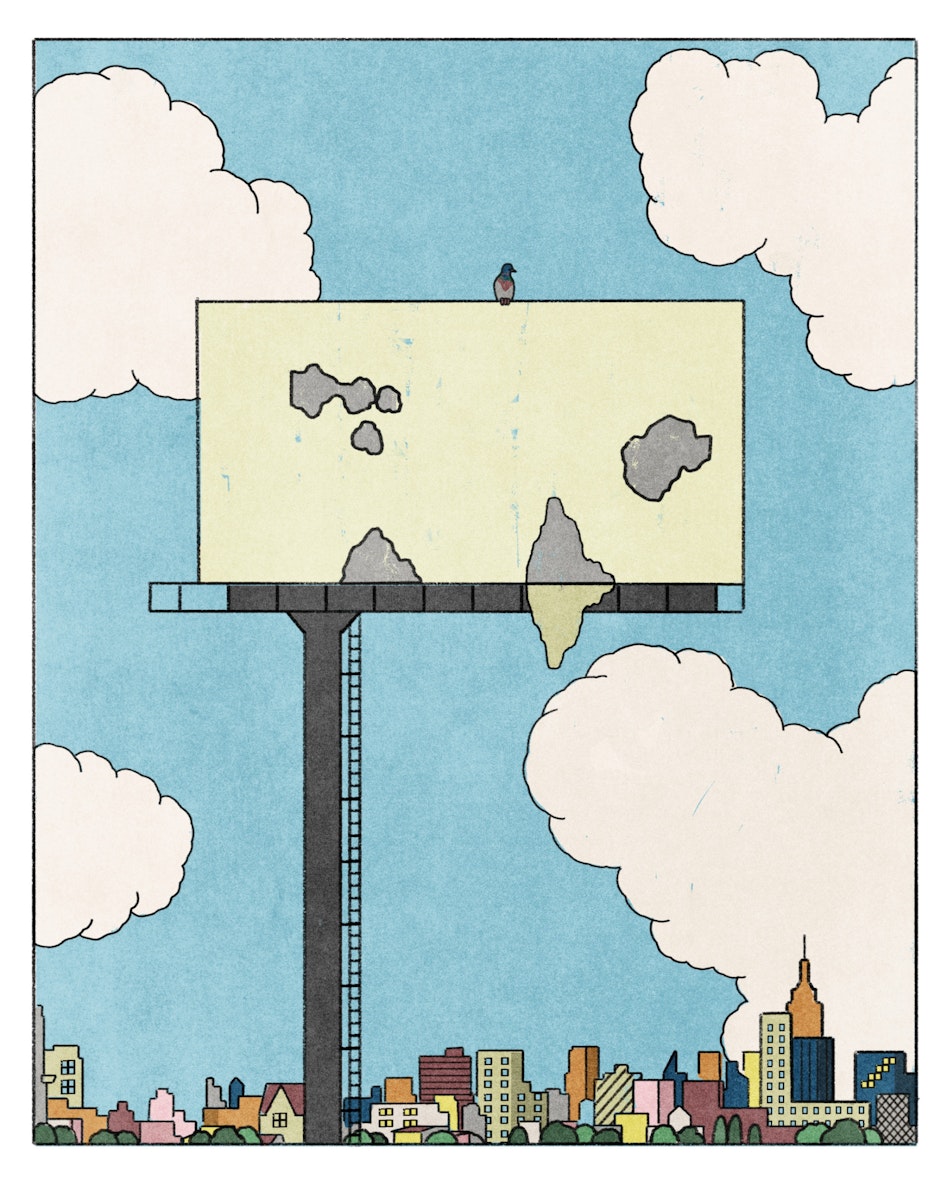 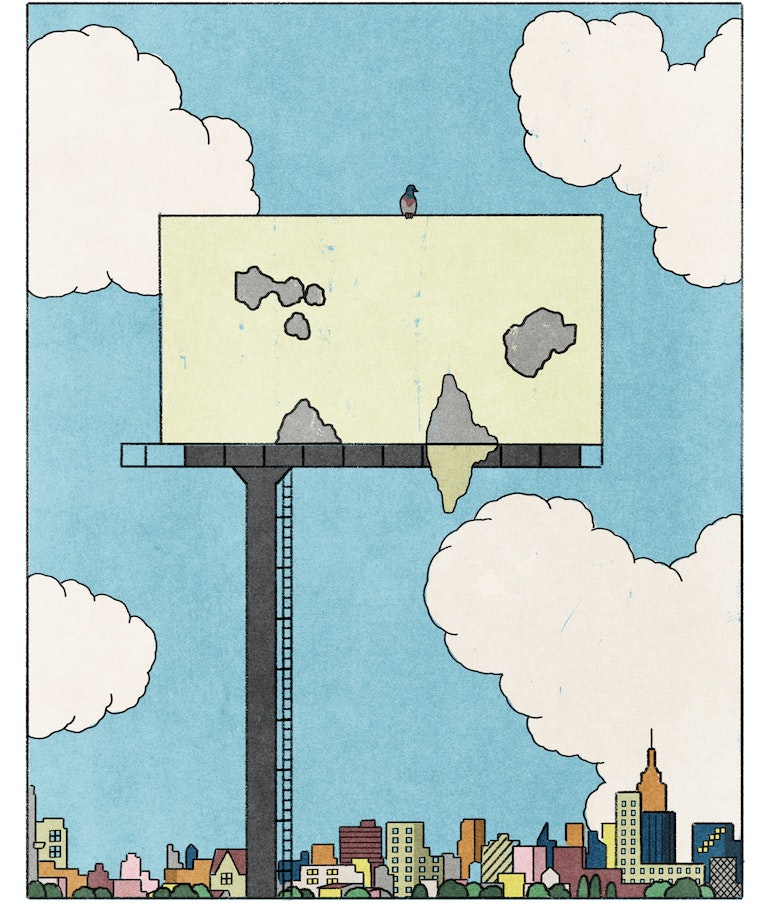 Lauren Kelly is a writer based in London.

LONDON — The color red (emotionally intense, synonymous with manipulation) fills the screen. “Let’s open up London!,” begins a new video from Coca-Cola. A sculpted glass bottle appears, oozing with corn syrup, fermenting my insides. A stream of sweet caramel is poured into a glass filled with ice; there is a slight foam head. Piccadilly Lights is the stage. At nearly 840 square feet, the landmark digital billboard is bigger than a tennis court, unmissable to the 100 million people that walk past each year. It is warm outside and I am watching bubbles disperse, gagging.

Coke has held a place on Europe’s largest billboard since 1954. The first sign here was for Perrier, produced by Nestlé, in 1908. Every 90 seconds, six corporations “from non-competing categories” rotate positions, warming up for one brand to take over the screen in its entirety. Only four historical moments have turned off the lights: World War II, Winston Churchill’s funeral in 1965, Princess Diana’s funeral in 1997 and Earth Day in 2017.

Corporations shape our cities, infiltrating people’s daily lives. “This commercial discourse is the ground on which we live, the space in which we learn to think, the lens through which we come to understand the world that surrounds us,” Sut Jhally, a professor of communications at the University of Massachusetts, has written. (Emphasis mine.) Pay attention to the values billboards shape and the stories they tell, he suggests. “If human beings are essentially a storytelling species, then to study advertising is to examine the central storytelling mechanism of our society.”

The inception of ubiquitous outdoor advertising is contested. In 1758 or thereabouts, Samuel Johnson reportedly lamented that “advertisements are now so numerous that they are negligently pursued.” Naomi Klein, in “No Logo,” blames “a seemingly innocuous idea developed by management theorists in the mid-1980s”: that successful corporations must primarily produce brands, as opposed to products. Whenever it began, there’s no debating the extent of its proliferation. The average person is now estimated to encounter between 6,000 to 10,000 advertisements every single day, almost double what we used to see 15 years ago. Billboards are the most popular form of outdoor ads, and they generate 66% of industry revenue in the U.S.

The potency of outdoor corporate advertising has sparked a recent movement to reclaim our streets through art. Black voguers recently co-opted some 70 digital billboards in New York’s Times Square, performing stylized dances of liberation. The city of Grenoble in France has banned commercial street advertising to enhance opportunities for non-commercial expression. Los Angeles just revealed an ambitious interactive structure that serves as a live-feed backdrop for pop-up cultural events, and an official campaign has encouraged artists to revamp Sao Paulo, Brazil with graffiti.

The words “GREEN SCREEN” wash over the Piccadilly canvas. It is precisely 8:21 p.m., or 20:21 on the 24-hour clock, and the advertisements on the massive billboard are being paused for two minutes. For that brief interlude, once a day, a rotating cast of artists gets to showcase specially commissioned work that considers our world circa 2021.

Black and white text gives way to swooping video of glittering wetlands and significant mountains, a verdant stretch of land virtually untouched by humans for more than six decades. This is the Seoul-based artist Sojung Jun’s showcase of the Demilitarized Zone and the adjacent Civilian Control Zone between North and South Korea. That border area has become one of the world’s largest conversation areas, home to more than 5,000 species, 106 of which have protected status.

The vivid audio-visual installation debuted at Piccadilly this August and symbolizes the power of nature versus human-made tragedies like war. Amid conflict, there is always the potential for peace.

Whether advertising is an instigator or a product of capitalism is up for debate. Does production fuel capitalism? Or does consumption fuel capitalism? William Leach, the author of “Land of Desire,” describes capitalism as a deliberate, coordinated effort among “captains of industry” to detach consumer demand from “needs” (which can be satisfied) to “wants” (which may remain unfulfilled). Critics, such as the French philosopher Bernard Stieger, maintain that capitalism is governed by consumption, powered by “addicted cycles” and “the exhaustion of desire.” No matter the stance, the two are indisputably linked: The essential feature of a capitalist system is the motive to make a profit.

CIRCA, the project developed by the British-Irish artist Josef O’Connor to bring art to the Piccadilly screen, has other intentions. It promises a different perspective. 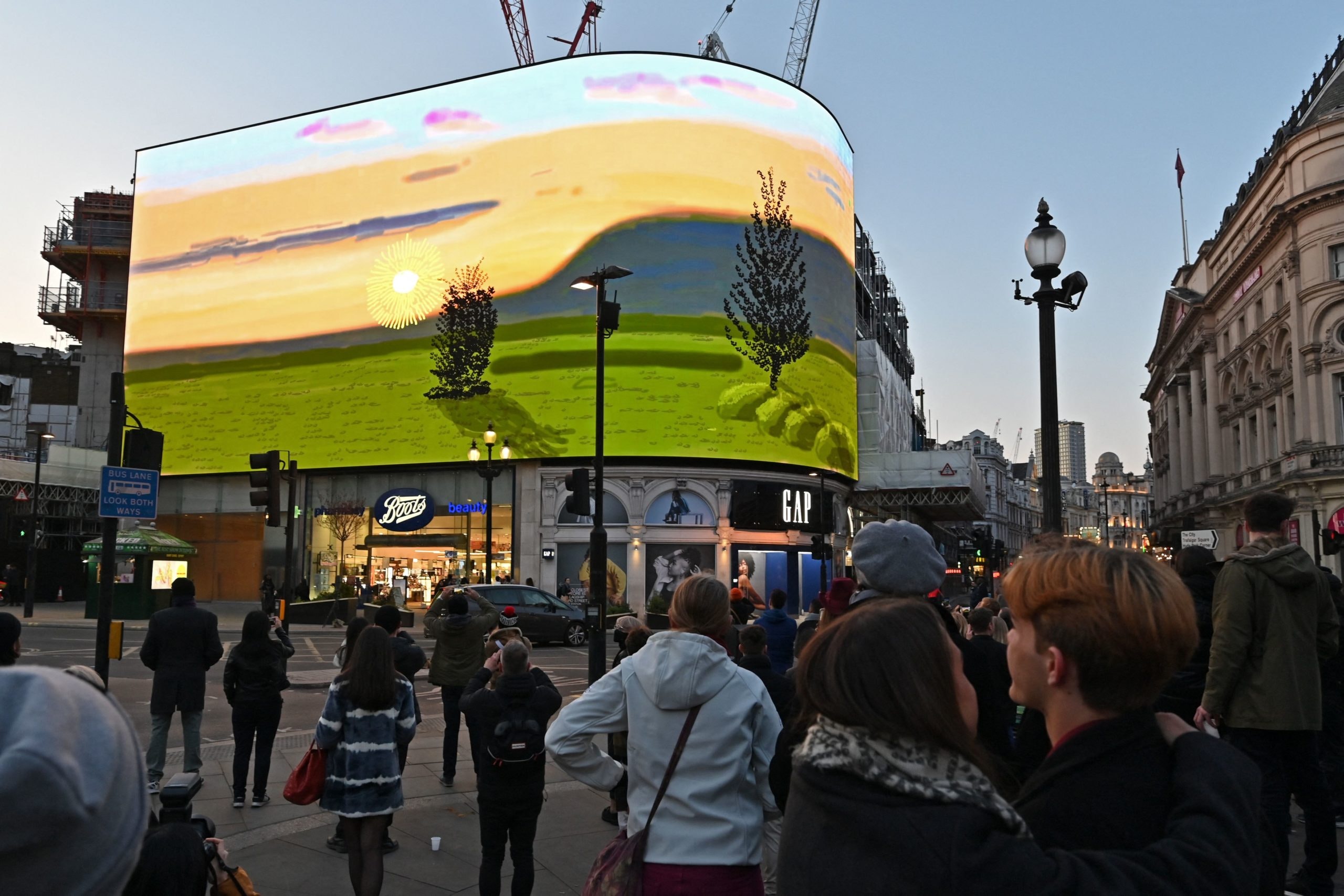 David Hockney’s “Remember you cannot look at the sun or death for very long” at Piccadilly Circus on May 1. (Justin Tallis/AFP via Getty Images)

On Oct. 31, 2020, Ai Weiwei made history when he presented the billboard’s single longest piece of content: a new 80-minute film challenging the meaning of authority in today’s geopolitical world. Cauleen Smith, one of America’s leading artists, subsequently broadcast “COVID MANIFESTO,” a series of 23 pronouncements made as reflections on the pandemic. Patti Smith and her band brought in the new year with a moving tribute to Britain’s National Health Service. In February, four films by Tony Cokes confronted police violence, and David Hockney’s animated sunrise offered hope and global collaboration in May. CIRCA is now unveiled across a network of the world’s most iconic outdoor video screens, including Times Square, Seoul, Tokyo and Los Angeles, and its companion website, which streams the live program in unison, has so far received 30 million views.

“We’re bringing culture to the frontlines of society,” O’Connor told me. The phrase “It’s like Piccadilly Circus” is commonly used in the U.K. to refer to a place or situation that is extremely busy with people. It has been said that a person who stays long enough at Piccadilly Circus will eventually bump into everyone they know. “Relatable, reflective, timely art often goes viral on the internet, but we haven’t seen something of this scale in a physical space before,” he added. It’s refreshing, democratizing and, by the look of things, stimulating.

Recognized as one of the “creative industries,” might advertising too enrich cities? Ocean Outdoor and Artisan Drinks, attempting to provide an uplift amid global lockdowns, last year launched a U.K.-wide campaign promoting creative ways of social distancing. The sociologist Sharon Zukin emphasized that such corporate advertising forms “a visual repertoire of culture,” which she sees as a “public language” or vernacular. Story-making advertising animates the relationship between people and things — but only within the boundaries of capitalism. The cultural sector is concerned with the generation of knowledge and information, while advertising is focused on its exploitation.

Following the 9/11 attack in New York, the world’s largest out-of-home advertising company, JCDecaux, claimed that tighter security in airports will create opportunities for the company because passengers are a captive audience. This outlook, which ultimately compromises ethics, authenticity and creativity, is sharply contrasted by audience-led public art initiatives. O’Connor notes that CIRCA “only works if people actually want to engage with it.” The cultural sector creates profits too of course, but the relationship between audience and artist is mutually beneficial.

This year, CIRCA joined forces with Dazed and Confused magazine to award 30 upcoming artists the opportunity to exhibit their work on the iconic Piccadilly screen, as well as K-Pop Square in Seoul and Yunika Vision in Tokyo. One finalist will also receive a prize of £30,000 ($41,700), generated from the sale of exclusive limited-edition CIRCA prints, to help kickstart their career. As Ai put it, “CIRCA offers a very important platform for artists to exercise their practice and reach out to the public.”

“Story-making advertising animates the relationship between people and things — but only within the boundaries of capitalism.”

But can cities afford to buy back their public space? The significance of billboards extends beyond the content of specific advertisements. The price for advertising in London’s landmark spot is roughly £4 million ($5.5 million) a year. The global outdoor advertising market, estimated at $27 billion in 2020, is projected to increase to $33.1 billion by 2026. The sociologist Anne Cronin points out that companies often fund the construction and maintenance of bus shelters or other public infrastructure in return for the right to sell advertising space on them. Last year, a gigantic mural of a nurse preparing for the opening of a COVID clinic appeared on a three-story building in Manchester. It was part of the National Portrait Gallery’s “Hold Still” exhibition, which attempted to capture a view of the nation during lockdown. It has since been painted over with a Netflix ad.

Seven years on and Grenoble still has no street ads. It became the first city in Europe to replace hundreds of ads with trees and noticeboards after the newly appointed Green mayor Éric Piolle canceled a contract for outdoor advertising, including scores of large billboards. (Bus and tram stops still have ads — the contract is controlled by the regional authority.) The lost revenue was retrieved by reducing some of the perks for government officials, such as vehicles for personal use. In São Paulo, which prohibited outdoor advertising in 2006, the Clean City Law likewise remains in place. Following the removal of thousands of billboards, the municipality now encourages and even funds graffiti art.

Other cities have benefited from compromising. In July 2020, the Los Angeles neighborhood of West Hollywood approved 21 art projects to be funded using money generated by billboards. The Sunset Arts and Advertising Program, approved in April 2019, allows digital billboards — banned by some cities nearby — in exchange for a share of advertising revenue and screen time for arts and public service programming. The program is expected to generate tens of millions of dollars in annual revenue for the city’s budget. In London, what began as a proposed one-off slot at Piccadilly Lights snowballed into a daily showcase and an 18-month contract, an agreement O’Connor hopes will be extended. He described his relationship with Landsec, the site owners, as “trusting,” and noted that the artwork does not need to reflect or even “please” his landlord.

Public and private interests are clearly becoming increasingly blurred. You could go as far as to say that advertising is so intertwined with Western society that if billboards were removed, people wouldn’t notice. This apparently happened in Paris in 2018, when more than 1,600 advertising panels disappeared for around 18 months while the city sought a new contract — yet when they crept back in (in more or less the same places), residents complained of a commercial assault.

Sure, billboards’ impact on sales may be ambiguous, but their contribution to capitalist society is not. As an industry spokesman explained to Cronin: “There is no interest in [the city as an] environment whatsoever. They’re interested in the number of people. The fact is that the numbers of people [just happen to be] in places called cities.” The city, then, is a profitable space, but its people are seemingly no longer willing targets. 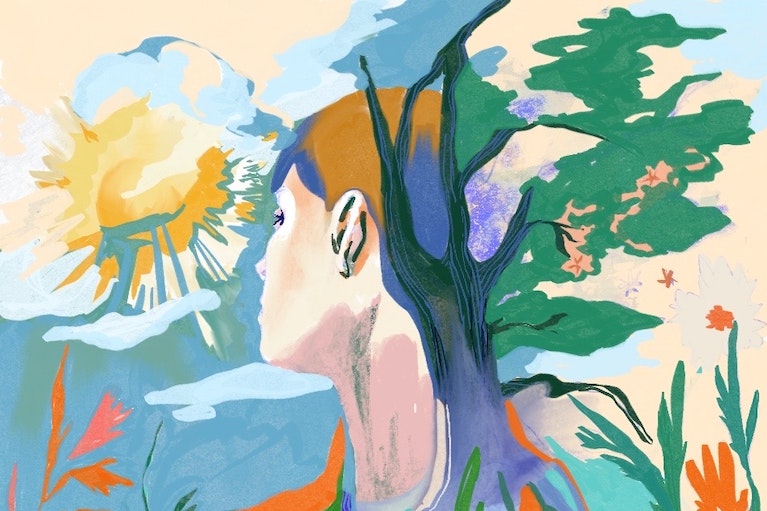 Essay Climate Crisis
How To Do The Most Good
William MacAskill 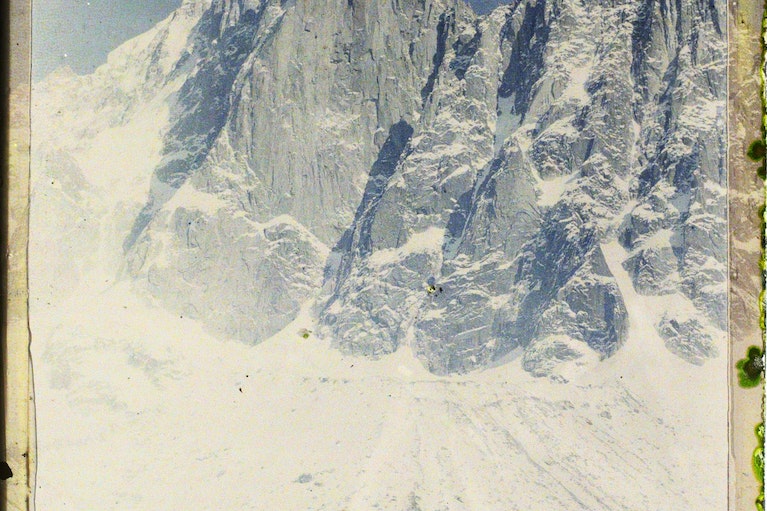