Reviving the spirit of the early post-Cold War years is the path out of conflict. 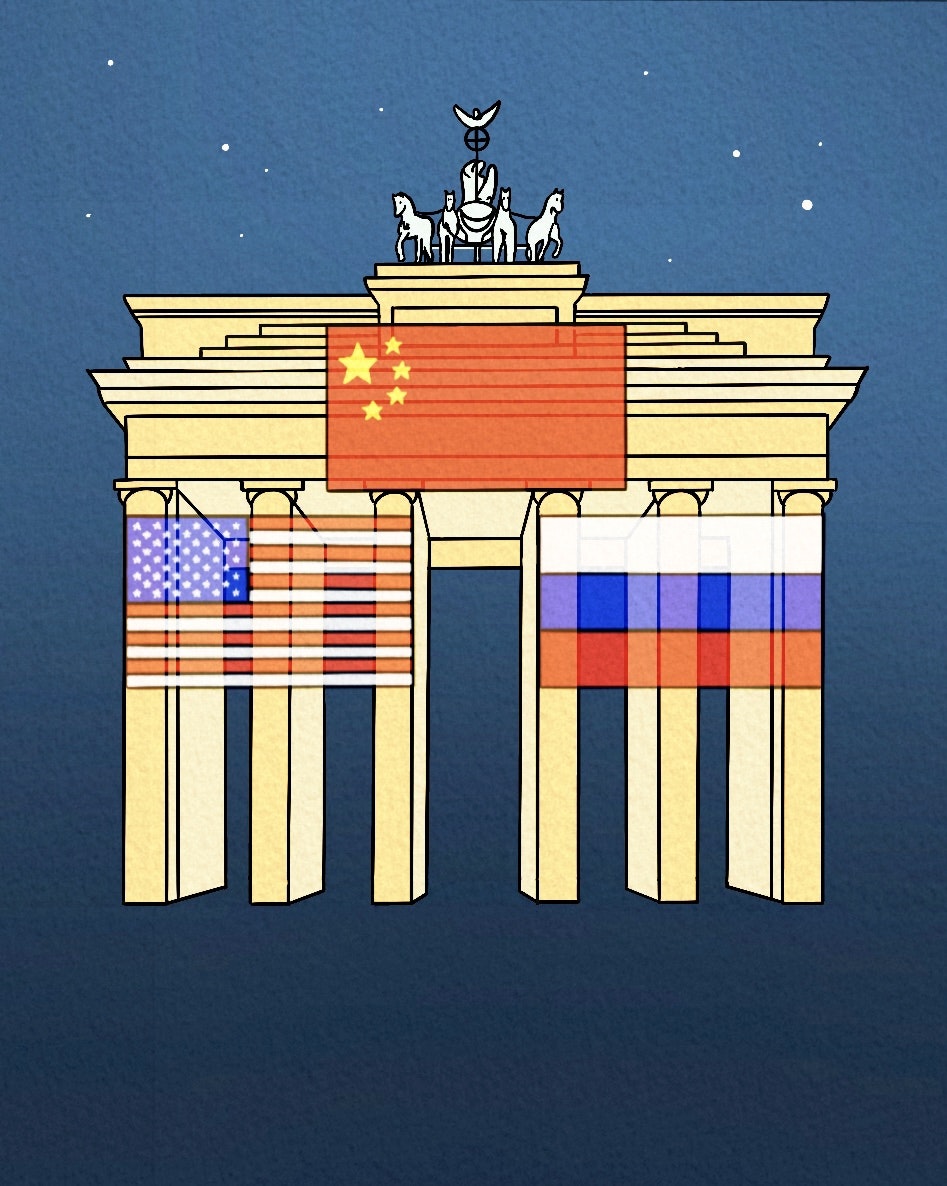 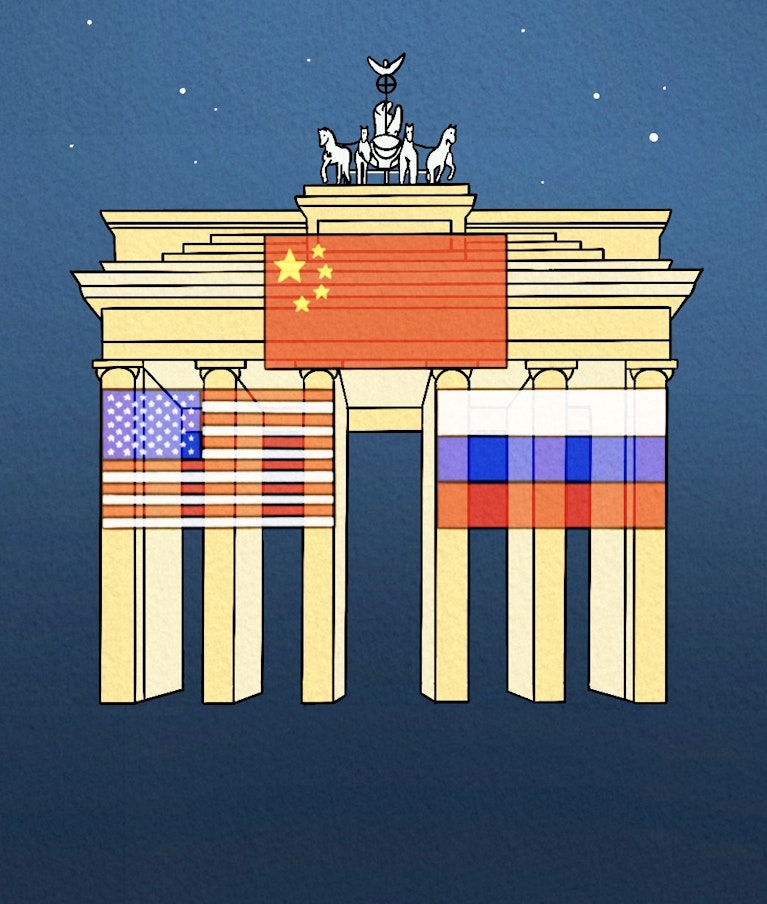 Imagine a three-wheeled vehicle, each wheel being propelled in a different direction, approaching an intersection where the traffic light is flashing red, green and yellow. The scene triggers a traumatic memory in the driver who was once responsible for a crash so horrific it still resonates to the bone. It would be no surprise in this circumstance if the driver hesitated and the vehicle stalled.

That, in a nutshell, is the German bind today as NATO engages in a showdown with Vladimir Putin’s Russia over Ukraine.

Though considered the anchor of Europe, contemporary Germany is dependent on America for defense, Russia for gas and China for trade to fuel its export-led economy. It is presently governed by a so-called “traffic light coalition,” named for the identifying colors of the Social Democratic Party (red) which has long seen itself as a buffer and mediator between West and East; the Greens, whose chief aim is to advance human rights and ecological sustainability; and the Free Democrats (yellow), for whom a laissez-faire economy is paramount.

Famously, the SPD chancellor in the late 60s and early 70s, Willy Brandt, opened up to the Eastern Bloc with trade and relations through his Ostpolitik policy. The Greens came of age in the 1980s with mass protests against nuclear power and the American nuclear missiles stationed on German soil and aimed at the USSR. In those days the Greens wanted out of NATO altogether. In 1989, it was the Free Democrat foreign minister, Hans-Dietrich Genscher, who sparked the peaceful revolution that breached the Iron Curtain across the Eastern Bloc by negotiating with the Czech government to allow East German refugees to emigrate to West Germany. He was later instrumental in negotiating the unification of the East’s socialist system with the West’s market economy.

All these crosscurrents of past history, social change and a world order sliding from interdependence toward spheres of influence converge in today’s federal republic. How Germany sorts it all out will reveal a lot about the road ahead for the rest of us.

Alpha NATO And The End of The Cold War

It goes without saying that indulging Putin’s penchant to change borders by force is a threat to peace and stability everywhere. Even China agrees with that.

The more alpha nations in NATO have doubted Germany’s conviction on this score, ridiculing what they regard as its spineless offer of 5,000 combat helmets to bolster Ukraine’s defenses and shaming it for refusing to allow weapons sold to Estonia to be exported to Ukraine; 59% of the German public opposes sending weapons to Kyiv.

But the largely pacifist political culture that stands behind German reticence should not be faulted any more than Russia’s reprised concerns should be summarily dismissed as mere “revisionism.” Both only indicate just how far the European security order has strayed from the spirit that prevailed in the early days of the post-Cold War era.

It is instructive in this regard to revisit the bargaining that took place between blocs in winding down the Cold War confrontation. The central issue then was whether Germany, once reunified, should remain in NATO. The idea of the Western military alliance’s expansion across the former Eastern bloc up to the Russian border was so unimaginable that the issue was never raised.

During the summit in Washington between Soviet President Mikhail Gorbachev and U.S. President George H.W. Bush in May 1990, I had several long conversations with Valentin Falin, Gorbachev’s point man on Germany and NATO.

The Soviet position was firm and remained unresolved at the summit. “The current American proposal for a united Germany in NATO is unacceptable to us precisely because it is rooted in the confrontational era of the Cold War,” as Falin put it in an article in the Los Angeles Times drawn from those conversations. “We all know full well how NATO came into being — by a political philosophy that regarded the Soviet Union as an eternal enemy. This messianic mission of NATO is essentially still there. And that is obviously incompatible with the need for an all-European security and cooperation process. Germany’s inclusion in NATO would thus only perpetuate the division of Europe, which all parties proclaim they want to end.”

Falin proposed “discarding the outmoded Atlantic and Warsaw Pact alliances” and “replacing the obsolete and costly system of bloc security with a system aimed at preventing the use of military force and counterforce in Europe.” Above all, from the standpoint of a nation that lost some 20 million souls in the war against Hitler, he insisted that any “new threat of war cannot under any circumstances come from German soil. That, after all, was the central meaning of the ‘German question’ as formulated at Potsdam in 1945.”

As everyone now knows, such an “all-European security” arrangement never saw the light of day. All of Germany after reunification was absorbed into NATO and, after the dissolution of the Soviet Union and the Warsaw Pact in 1991, NATO began its expansion eastward, pushed by the Americans and pulled by former Soviet satellites seeking to protect their newfound self-determination.

It is not hard to see how post-Soviet Russia came to view this victory lap of NATO expansion as a betrayal of Gorbachev’s “new thinking” that ended an icy era of confrontation. For many Russians, this move was nothing more than the raw exercise of power that took strategic advantage of a weakened foe turned partner in peace.

Fists In Our Pockets

In 1996, well before Putin’s ascent to power, Alexander Lebed, a popular former Russian general and presidential candidate critical of the bibulous Boris Yeltsin, wrote an essay for my Global Viewpoint newspaper syndicate. Already then, the resentment at being played by those with the upper hand was gestating. As he framed the issue: “When politicians and military planners, who were so used to the lengthy ‘struggle of position’ against the USSR and the Warsaw Pact, found themselves in a very favorable position, it proved too difficult for them to give up the temptation to, finally, at long last, implement their former plans.”

For Lebed, this steady advance of a hostile military alliance into the space its own allied forces had just abandoned rubbed in the ignominy of defeat. “If this sense of loss and humiliation that comes with defeat is allowed to fester in the Russian mentality, it may lead to an inferiority complex that can only be overcome by gaining new victories, preferably over old rivals,” he warned, invoking the lesson of Hitler’s rise in the wake of Germany’s sense of humiliation after the Versailles Treaty that ended WWI. “Territories come and go,” Lebed wrote, “but humiliation of a nation’s dignity remains in the minds of the people. … It injects the virus of vengeance into the defeated nation.”

Presciently, he went on: “I doubt very much that pushing Russia to the backyard of Europe will increase the sense of stability and certainty, or make Russia more democratic and predictable. This approach by the West is destined, at best, to place both sides peering at each other suspiciously from across the fence, fists in our pockets.” And so it has.

Perhaps miscalculating, Putin seems to have sensed a weakness in the West relative to Russian strength and saw a chance to finally push back. He took his fists out of his pockets and moved massive military force to the Ukrainian border, in the process achieving the very opposite of his aim by fortifying the resolve of an alliance that was on its way to obsolescence.

What now? To start with, Germany can surely be forgiven for remembering “the German question” when it is asked, and refuses, to supply lethal arms in the Ukraine conflict. And more than any other NATO member today, it knows how the consequences of a peace that humiliates the defeated can come back to haunt Europe.

One way for the leadership in Berlin to ultimately redeem the German question would be to offer a “German answer” by seizing the opportunity of this biggest crisis since the end of the Cold War to revive the spirit of the early post-Cold War period. Germany could reassert itself along with France as the core of Europe by embracing President Emmanuel Macron’s push for “a new security architecture” beyond the fraught NATO framework. As Macron has put it, “there is no security for Europeans if there is no security for Russia” — just as the truth is also the other way around. German Chancellor Olaf Scholz made this point in Moscow on Tuesday. “For all Europeans, it is clear that sustainable security cannot be achieved against Russia — only with Russia,” he said.

Here the German bind that ties it to both Russia and America — and China as well — may turn out to be an asset instead of a hindrance because it places the European powerhouse in the best position to forge a new modus vivendi that makes the world safe for the kind of interdependence Germany itself embodies.

Putin has not made such a new approach easy with the absurd demand that NATO leave all former Eastern bloc states while mobilizing a menacing show of force. But is it so absurd to suggest, as Macron does, that Russia has legitimate security concerns? As Graham Fuller, a former vice-chair of the U.S. National Intelligence Council and one-time CIA station chief in Afghanistan, has asked, would the U.S. accept a hostile military alliance establishing bases in Mexico or Canada?

The U.S. is not wrong to demand Putin first remove his troops before any bargaining over a future order can begin. To suggest as much under the gun is a spectacular display of bad faith from the outset. But then for both sides to not change the terms of their thinking from a bloc mentality to common security is to go back to square one and acquiesce in the formation of contentious spheres of influence that invite the perennial risk of disruption and confrontation instead of security and peace for anyone.