The Other Invisible Hand

Why all life limits certain kinds of selfishness. 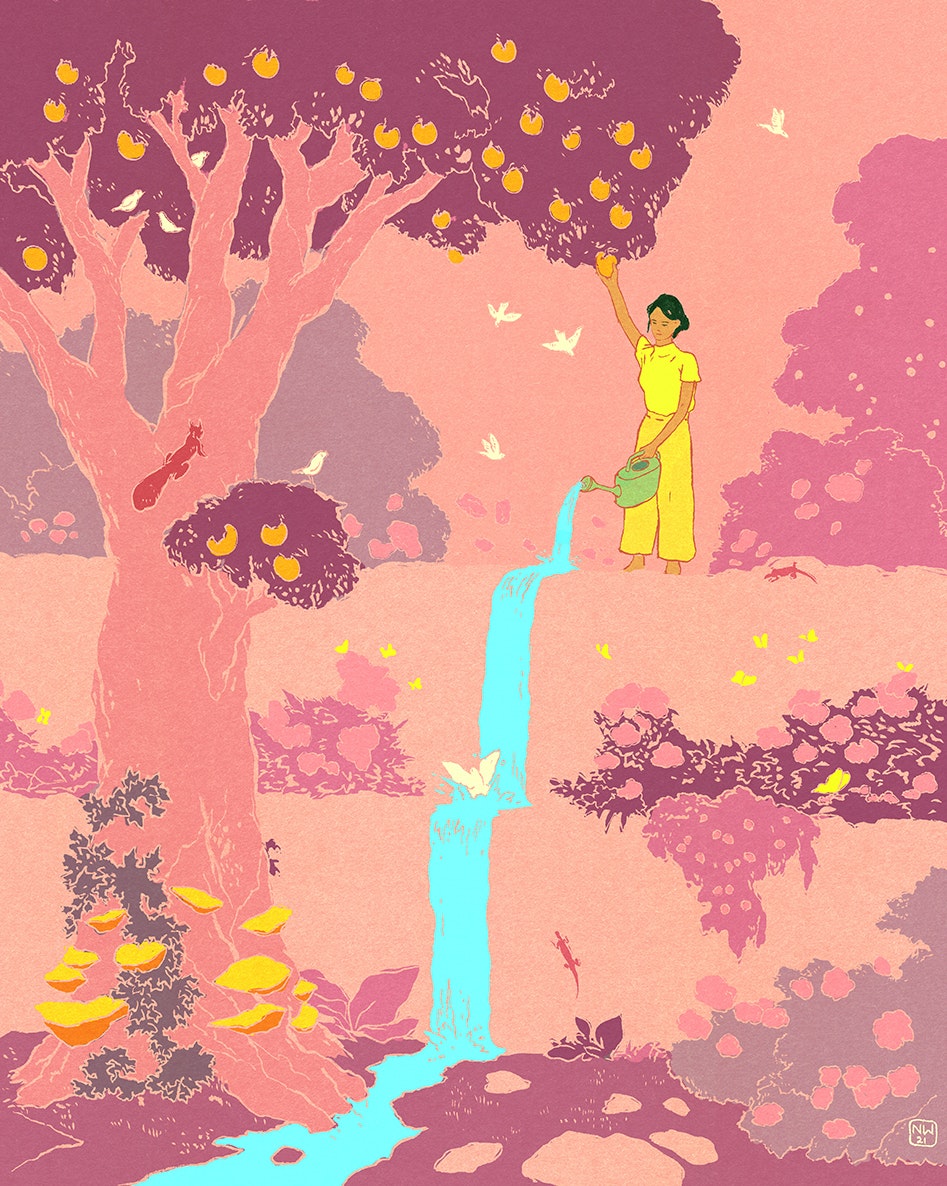 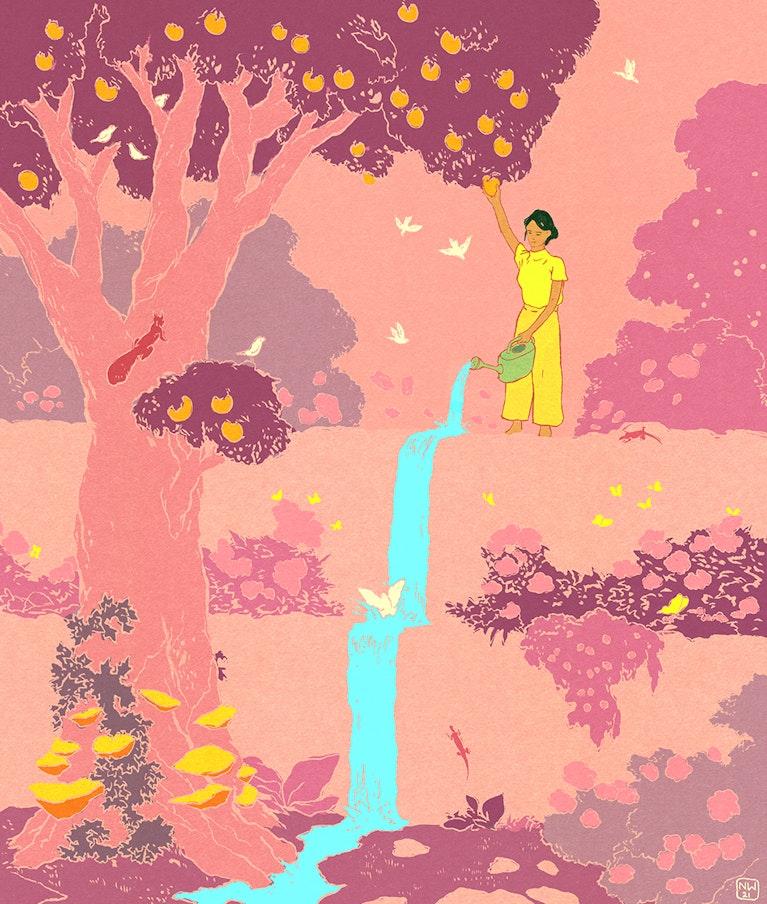 Niklas Wesner for Noema Magazine
Credits
Jag Bhalla is an entrepreneur and writer.

Economics and evolution are basically in the same business: Both are all about productivity selection, though one has been at it for billions of years longer than the other. Both involve “invisible hand” magic — intricate, unplanned, “self-organizing” systems. Unfortunately, economics hasn’t kept up with what natural scientists have discovered about life’s organizing secrets. Nevertheless, economic ideas rule our lives, so it’s critical we apply Leslie Orgel’s second law (“evolution is cleverer than you”) specifically to economics.

For instance, it may surprise many non-biologists to learn that evolution isn’t only about red-in-tooth-and-claw competitive selfishness — it’s also “ruthlessly cooperative.” And protecting life-supporting cooperation requires suppressing certain kinds of selfishness. Biologists, unlike many economists, grasp when the “greed is good” ethos gets deadly.

There’s no real argument about the fact that “the evolution of cooperation is central to all living things.” That’s the first line of a Nature Ecology & Evolution paper by the biologists Nicholas Davies, Kevin Foster and Arvid Ågren, and it expresses an utterly uncontroversial view among biologists. The paper examines a “central puzzle”: “Why does evolution favor investment in cooperation rather than self-serving rebellion that would undermine a particular genome, organism or society?” Surely a topic of central concern to economists also. The authors present abundant “evidence that enforcement shapes cooperation across all levels of biology.” Enforcement is defined as “action that evolves … to reduce selfish behavior within a cooperative alliance.” Adding to copious real-world cases, modeling shows that whenever “new selfish elements are introduced to a population, the evolution of suppression is often rapid.” Otherwise, gains from selfishness get ruinously risky.

These evolutionary lessons aren’t related to the two main flavors of critiques of economics that typically command attention. This isn’t about deviations from “rationality” or “market failures.” No matter how perfectly rational imaginary market participants are in responding to fully loaded local incentives, the systemic effects of self-organization are often far from benign. In biology, they’re routinely collectively ruinous. Only certain kinds of self-organizing complex systems enable collectively beneficial results. And billions of years of R&D have taught biology which tricks work.

Life necessarily operates a Russian doll-like nested hierarchy of cooperation, where selfishness-suppressing enforcement operates at every level. We might call this “coop-cop policing.”

Every so-called selfish gene also cooperates with the other genes in its genome — the gene team that collectively builds and (co)operates their “survival vehicle” (a.k.a. body). Every complex cell is powered by cooperation (their power plant subcomponents, chloroplasts or mitochondria, result from symbiosis). Every multi-cellular organism is a collaborative “society of cells.” Group-living species form varying degrees of super-organisms where survival is influenced by the fitness of group mates (social groups become a looser, but often no less necessary, form of extended survival vehicle). And cross-species collaborations abound (symbiosis isn’t rare — it’s the rule). Indeed, as David Haskell, a biologist and writer, notes, a tree is “a community of cells” from many species: “fungus, bacteria, protist, alga, nematode and plant.” And often “the smallest viable genetic unit [is] … the networked community.”

Amazingly, you don’t even need a brain to reap the benefits of being ruthlessly cooperative. Microbes collaborate extensively, for instance in providing biochemical “public goods,” which are predictably protected by coop-cop policies that prevent exploitative free or cheap riding (although we should bear in mind that this is an anthropomorphic analogy, since none of the microbial players has a mind or intentions). The scientific consensus has shifted so much that Richard Dawkins, in the 30th-anniversary edition of “The Selfish Gene,” wrote that he could just as accurately have called his book “The Cooperative Gene.” Perhaps decades of our economic and political lives would have been much less harmful if he had.

A very instructive case of how greed is not good, of self-interest run amok, is cancer. Tumors are a form of cell-level selfishness that all organisms must do their darnedest to suppress. As Athena Aktipis, author of “The Cheating Cell,” and several other evolutionary biologists explain in a 2015 paper, a defining trait of traitorous cancer cells is that they gain in fitness “at the expense of the organism.” They can’t help but make explicit market parallels, describing two revealingly named cancer strategies as “demographic cheating” and “economic cheating.” Cancer cells cheat on their body’s biological social contract.

Every viable bio-social contract in multi-cellular organisms must enforce this rule: The health of the whole must trump the self-interest of any part. Otherwise, the parts become parasitic, gaining at the expense of the viability of the whole. Unregulated parts can kill their wholes.

Humans are obligated cooperators: To survive, we have no choice but to cooperate with other humans. Indeed, the evolutionary biologist David Sloan Wilson calls teamwork humanity’s “signature adaptation.” We are evolution’s most productive super-cooperators — our economies are our social metabolism, facilitating our techno-political form of globe-spanning super-cooperations.

Unfortunately, the ideas most economists use have been too influenced by “methodological individualism,” rather than the more scientifically supported view of us as a super-social, super-cooperative, intensely interdependent species. Often, this economics-style individualism is of the Thomas Hobbes variety, which paints humans in “a state of nature,” waging a “war of all against all.”

But this influential image and logic is bad science and utterly untrue (and a terrible basis on which to build on the Enlightenment’s ideas about political and economic systems). Charles Darwin wrote an entire book about humans being social creatures. He wrote that any Hobbesian human would be an “unnatural monster.” And contrary to that science-denying slogan of Margaret Thatcher’s, that “there is no such thing as society,” no human has ever survived or thrived without a tribe or society. As Wilson puts it, “What made our ancestors different was the ability to collectively suppress … disruptive behaviors within the group, so that cooperating … became the dominant survival strategy.”

Division of labor in biology’s cooperations creates “fitness interdependence.” That’s Aktipis’s term for a mode of joint interests that doesn’t rely on relatedness or reciprocity, the previously popularized ways to explain the evolution of unselfish behaviors (a.k.a. altruism). Once collaboration evolves to be more productive than solo strategies, the game changes — you now need your co-laborers to survive and thrive also. Again, lessons surely sorely needed for a fitter economics and wiser politics.

Speaking of such lessons, Wilson and John Gowdy write, “the invisible hand metaphor can be justified … for humans in addition to nonhuman species, [only] when certain conditions are met.” Space precludes the details, but what matters is that this contrasts sharply with core economic assumptions and teachings. As Wilson explains, the “problem with laissez-faire in all its forms … [is] it is simply profoundly untrue that lower-level agents pursuing their narrow interests — whether an individual, a small firm or a leviathan like Google — robustly benefit the common good.“

Biology’s invisible hand knows better. It has tested over billions of years a mind-bogglingly vast variety of super-complex cooperations — and religiously, rigorously, ruthlessly weeded out the many self-organizing setups that aren’t productive enough or that create collective catastrophe.

We need economic and political equivalents to the evolutionary wisdom of these life-wide logic patterns. For instance, policies that mimic tumor-suppressor genes and coop-cop processes that suppress unenlightened selfishness.  This will require a wholesale revision to the regulation-reviling reflexes of free-marketeers. As Wilson quips, “an unregulated organism is a dead organism.” We need ways to detect and suppress parasitic gains — for example, massive corporations like Amazon that pay zero taxes towards the upkeep of the infrastructure their profits depend on, or likewise billionaires who pay lower tax rates than nurses.

“The health of the whole must trump the self-interest of any part.”

We must explicitly protect our Russian-doll nested survival vehicles: communities, cities, nations, all the way up to the whole planetary biosphere. Our coop-cop policies must prevent us, or others, from gaining by harming any of those. Evolution teaches that without these, collective collapse awaits.

Instead, sadly, current capitalism too often mimics the logic of cancer — unconstrained greed-is-good games have metastasized throughout our body politic. And economists routinely call behaviors “rational” that produce predictably collectively painful or bad outcomes, and which evolution would suppress (like the sado-capitalist backfiring “rationality” that counsels against cooperating in “prisoner’s dilemmas,” or greedy co-suicidal tactics in “tragedy of the commons” cases, which the political scientist Elinor Ostrom showed are solved easily in many cultures not ruled by the ideas of economists).

In one way, all this should be obvious — ever been on a team? And this logic pattern has been expressed in many ways; in Tocqueville’s “Democracy in America,” which has a chapter called “How the Americans Combat Individualism by the Principle of Interest Rightly Understood.” Despite our ambient certainty that it is natural, Tocqueville describes individualism as a newfangled phenomenon. The word “individualism” itself entered the English language largely through translations of his work. Somehow, our leaders are educated into the error of dangerously discounting this “enlightened self-interest” (also a term Tocqueville invented).

It is in no one’s real interest to weaken or wreck what they (or their descendants) need to survive. This can be spelled out in 15 words, and could be called “needism”: Know your needs. Don’t damage what supplies them. Don’t let others either — or you’re doomed. Cultures either heed the logic of needism, or they perish.

Much popularization work remains to put newer evolutionary lessons on par with pop-science selfish-gene logic. But billions of years of harsh testing have taught all living systems to suppress certain sorts of disruptive selfishness. Economists should reflect long and hard on why the systems they study would be any exception. These yet unnamed natural law patterns limit even what evolution can sustain.

It’s time we hired the other invisible hand explicitly to support the common good. And we need coop-cop regulations of selfishness at every level to avoid parts harming their needed wholes. Otherwise, harsh karma awaits as our co-fate for allowing a plague of parasitic plutocratic plundering. 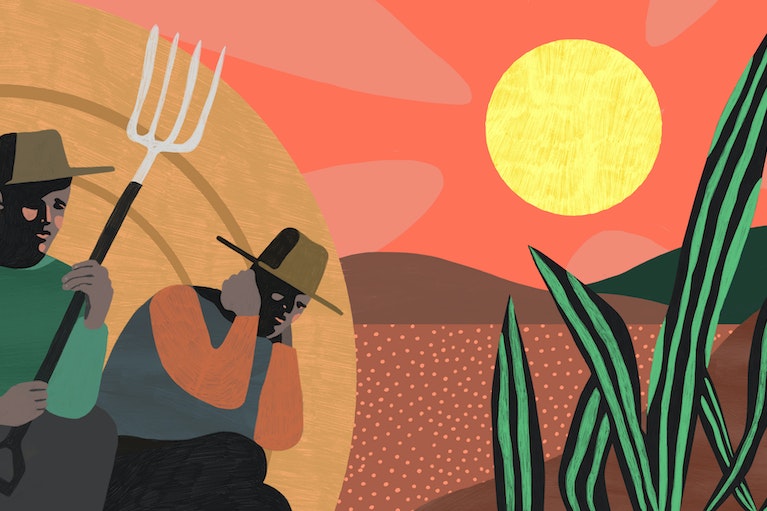