The Spiritual Space Of Rus Vs. NATO

The Ukraine conflict is as much about a clash of civilizations as security. 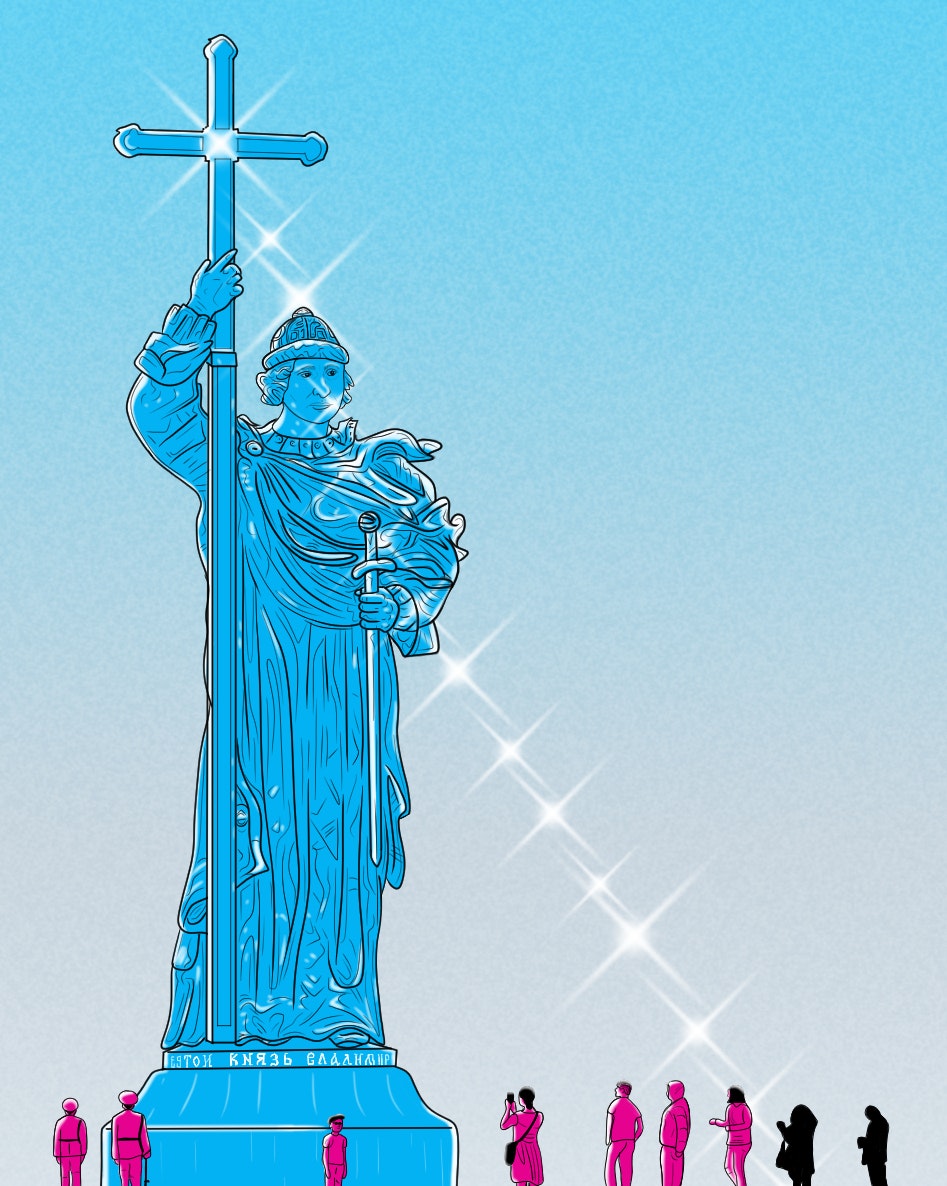 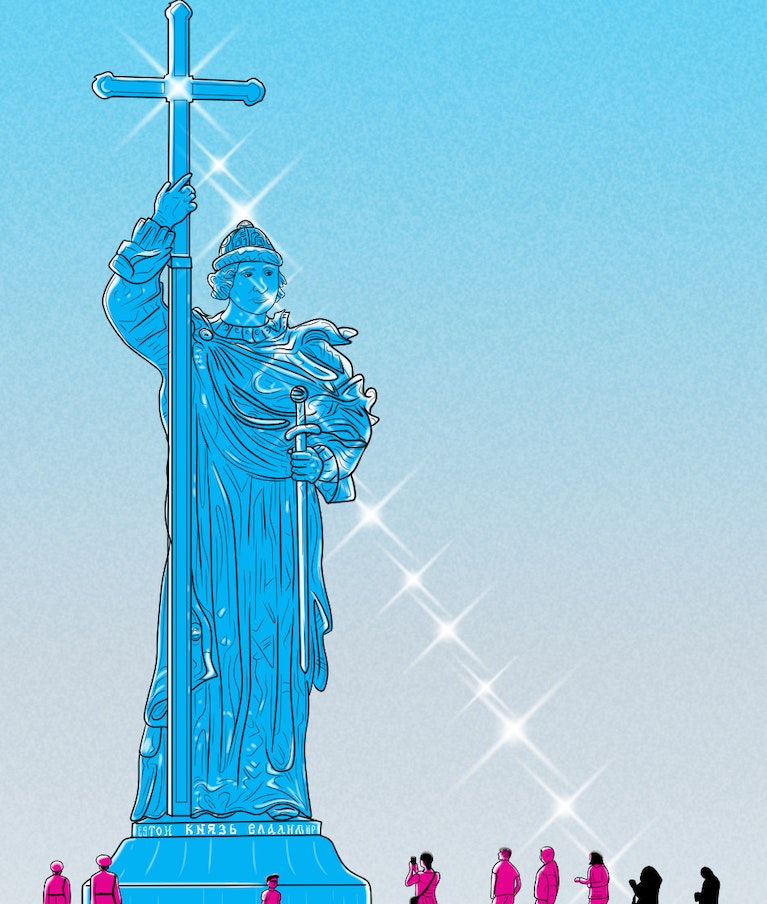 If you want to fathom Russian President Vladimir Putin’s motive in placing 100,000 troops at the Ukrainian border, you need look no further than the statue of Saint Vladimir, erected in 2016 at one of the most prominent spots in Moscow just opposite the Kremlin. As grand prince of what came to be known as “Kievan Rus” from 980 to 1015, Vladimir was the first Orthodox Christian ruler of an empire that stretched across what today is Russia, Ukraine and Belarus.

Putin no doubt sees himself as the historic heir to his namesake, who ruled from Kiev, as the unifier through language and religion (not to speak of conquest by force) of what he regards as one “spiritual space.” He made this clear in an extensive essay published in July.

“The wall that has emerged in recent years between Russia and Ukraine, between the parts of what is essentially the same historical and spiritual space, to my mind is our great common misfortune and tragedy,” Putin wrote.

He continued: “Our spiritual, human and civilizational ties formed for centuries and have their origins in the same sources, they have been hardened by common trials, achievements and victories. Our kinship has been transmitted from generation to generation. It is in the hearts and the memory of people living in modern Russia and Ukraine, in the blood ties that unite millions of our families. Together we have always been and will be many times stronger and more successful. For we are one people.”

Putin is far from alone in this view. No less than the West’s most darling dissident of Soviet times, Aleksandr Solzhenitsyn, long envisioned a return to the “Big Rus” of Vladimir the Great.

“We all together emerged from the treasured Kiev, ‘from which the Russian land began,'” Solzhenitsyn wrote in his 1990 essay, “Rebuilding Russia.”

Solzhenitsyn, however, harbored greater sympathy for those under Russia’s thumb who would resist such a unitary vision. “It pains me to write this as Ukraine and Russia are merged in my blood, in my heart and in my thoughts. But extensive experience of friendly contacts with Ukrainians in the camps has shown me how much of a painful grudge they hold,” he reflected in “The Gulag Archipelago.” The great novelist further warned that “our generation will not escape from paying for the mistakes of our fathers” and predicted that “things will get extremely ugly” unless Russians showed “good sense” in resolving antagonisms.

Having been in the gulag on the other end of the gun from his KGB compatriot, Solzhenitsyn foreswore the use of force. “We must hand over the decision-making to them: federalists or separatists, whichever of them wins. Not to give in would be mad and cruel. The more lenient, patient, coherent we now are, the more hope there will be to restore unity in future.”

He went on: “Maybe it will be necessary to have a referendum in each region and then ensure preferential and delicate treatment of those who would want to leave.” For Solzhenitsyn, this was the only course because of what he saw as the capricious nature of the area designated as belonging to Ukraine. “Not the whole of Ukraine in its current formal Soviet borders is indeed Ukraine. Some regions on the left bank [of the River Dnepr] clearly lean more towards Russia. As for Crimea, Khrushchev’s decision to hand it over to Ukraine was totally arbitrary.”

In this respect it is notable that the other darling of the West, Mikhail Gorbachev, supported the annexation of Crimea in 2014, affirmed by the kind of referendum Solzhenitsyn proposed, albeit under the shadow of a military presence.

The last Soviet president also shares Putin’s view that the West is suffering from a “victory complex,” as he told me in an interview in Moscow as long ago as 2005, betraying its post-Cold War promise not to seek to expand its sphere of influence by extending NATO to the Russian border. Like Putin, he believes the U.S. is using Ukraine as an “excuse” to pick on Russia.

As Putin put it in his lengthy screed, the West has “always sought to undermine our unity … hence the attempts to play on the ‘national question’ and sow discord among people, the overarching goal being to divide and then to pit the parts of a single people against one another.”

The idea of ethnically and religiously defined national borders once thought banished by the triumph of the post-Cold War global liberal order has regained a fresh momentum. This “theory of nationality,” to cite Lord Acton, may be a “retrograde step in history.” But as we now are all acutely aware, history does not always progress in one direction.

What is clear from these Russian perspectives is that the protracted Ukrainian issue is as much about a clash of civilizations as it is about security per se. It is another case of the return of the repressed for whom a sense of belonging is paramount.

What is the West to do now the conflict has once again reached a boiling point? In an effort to dial back tensions, U.S. President Joe Biden has agreed with Putin to a meeting of major NATO powers and Russia, which demands that the present Ukrainian state will never join what it regards as an anti-Russian alliance.

Some allies and critics are already grumbling that Biden’s offer is a “concession” that only feeds the beast of aggression.

Yet, this is precisely the course the most anti-Russian cold warrior of them all, the late Polish-born Zbigniew Brzezinski, who was national security advisor to President Jimmy Carter, proposed.

In a conversation on the eve of the Crimean crisis in 2014, he argued that the West “should indicate to Russia that we prefer a peaceful accommodation in Ukraine, and NATO should invite the Russians to participate in its ongoing discussions about this crisis. … Further, we should put NATO contingency plans into operation, deploying forces in Central Europe so we are in a position to respond if war should break out and spread,” which is what NATO is presently doing.

Ultimately, Brzezinski said, “The best solution for Ukraine would be to become as Finland has been to Russia. That is, a relationship where there are both open economic relationships with Russia and expanding connections with the European Union, but no participation in any military alliance.”

Such a solution would seem to both assuage the Russian concern of preserving its historical and civilizational presence while still providing Ukraine with the autonomy of sovereign rule in an ambiguous sphere of influence.

A messy arrangement to be sure, but better than the illusion that war can settle a battle over spiritual space.