I have been trying to find the language to express my discomfort with the presumption that anyone who does not welcome very large numbers of refugees into Europe with widely opened arms is somehow resurrecting the ghost of Hitler. Or the right language to express the proscribed thought that those in Eastern Europe who want to settle only Christian refugees might have appropriate reservations about the very real difficulties of integrating very different cultural and religious practices into their distinct way of life.

According to the OECD, Europe is expected to receive up to 1 million asylum applications this year. The European Union’s 500 million-strong population can surely absorb such numbers that may be small in the overall frame. But many communities are impacted in a concentrated way. By most accounts, today’s refugees from the savagely war-torn Middle East or Africa are looking for a permanent place, preferably in Germany — which expects 800,000 applicants this year — or Sweden, to plant their future.

I have found that language not on my own tongue, but through the words of the Slovenian philosopher Slavoj Žižek, famous for his provocative stance that we should engage in “obscene solidarity” instead of patronizing “political correctness” that tip toes around hard realities by using “pretty language.”

But before I get to Žižek, let me take a detour that lays the ground of what we mean — or at least what we have meant historically — by cultural pluralism. 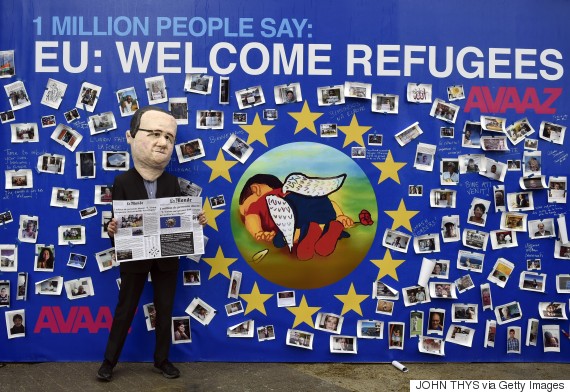 Some years ago I published a conversation with the great pluralist thinker Isaiah Berlin in the New York Review of Books entitled “Two Concepts of Nationalism.” In that discussion we addressed the attachment to one’s way of life as the very stuff of cultural pluralism that liberal civilization is meant to protect.

After examining aggressive nationalism of the kind we associate with Nazism that results from the wounds of humiliation — “like a bent twig, forced down so severely that when released, it lashes back with fury” in Berlin’s phrase — we spoke about “non-aggressive nationalism.” Here is what Berlin said:

Nonaggressive nationalism is another story entirely. I trace the beginning of that idea to the highly influential 18th-century philosopher Johann Gottfried Herder.

Herder virtually invented the idea of belonging. He believed that just as people need to eat and drink, to have security and freedom of movement, so too they need to belong to a group. Deprived of this, they feel cut off, lonely, diminished, unhappy. Nostalgia, Herder said, is the noblest of all pains. To be human means to be able to feel at home somewhere, with your own kind.

Each group, according to Herder, has its own Volksgeist — a set of customs and a lifestyle, a way of perceiving and behaving that is of value solely because it is their own. The whole of cultural life is shaped from within the particular stream of tradition that comes from collective historical experience shared only by members of the group.

Thus one could not, for example, fully understand the great Scandinavian sagas unless one had oneself experienced (as he did on his voyage to England) a great tempest in the North Sea. Herder’s idea of nation was deeply nonaggressive. All he wanted was cultural self-determination. He denied the superiority of one people over another. Anyone who proclaimed it was saying something false. Herder believed in a variety of national cultures, all of which could, in his view, peacefully coexist.

Each culture was equal in value and deserved its place in the sun. The villains of history for Herder were the great conquerors, such as Alexander the Great, Caesar, or Charlemagne, because they stamped out native cultures.

Only what was unique had true value. This was why Herder also opposed the French universalists of the Enlightenment. For him there were few timeless truths: time and place and social life — what came to be called civil society — were everything.

. . . In Herder, there is nothing about race and nothing about blood. He only spoke about soil, language, common memories, and customs.

Berlin then went on to express his own views:

Like Herder, I regard cosmopolitanism as empty. People can’t develop unless they belong to a culture. Even if they rebel against it and transform it entirely, they still belong to a stream of tradition. New streams can be created — in the West, by Christianity, or Luther, or the Renaissance, or the Romantic movement — but in the end they derive from a single river, an underlying central tradition, which, sometimes, in radically altered forms, survives.

But if the streams dry up, as for instance, where men and women are not products of a culture, where they don’t have kith and kin and feel closer to some people than to others, where there is no native language — that would lead to a tremendous desiccation of everything that is human.

“One of the great Left taboos,” he writes, “will have to be broken here: the notion that the protection of one’s specific way of life is in itself a proto-Fascist or racist category. If we don’t abandon this notion, we open up the way for the anti-immigrant wave which thrives all around Europe.”

In this regard, one should note that the largest party in Sweden today in the wake of the refugee crisis, according to polls, is the anti-immigrant Democrat Party. 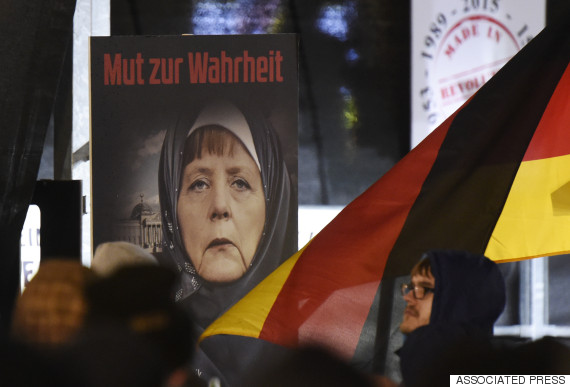 A poster depicts Merkel wearing a veil during a demonstration of the Legida anti Islamization movement, an offshoot of Pegida. AP Photo/Jens Meyer.

The standard Left-liberal reaction to this is, of course, an explosion of arrogant moralism: The moment we give any credence to the “protection of our way of life” motif, we already compromise our position, since we propose a more modest version of what anti-immigrant populists openly advocate. Is this not the story of last decades? Centrist parties reject the open racism of anti-immigrant populists, but they simultaneously profess to “understand the concerns” of ordinary people and enact a more “rational” version of the same politics.

While there is a kernel of truth in these moralistic complaints that Europe has lost empathy and is indifferent towards the suffering of others, Žižek argues that this is “merely the obverse of the anti-immigrant brutality”:

Both stances share the presupposition, which is in no way self-evident, that a defense of one’s own way of life excludes ethical universalism. One should thus avoid getting caught into the liberal game of “how much tolerance can we afford.” Should we tolerate if they prevent their children going to state schools, if they arrange marriages of their children, if they brutalize gays among their ranks? At this level, of course, we are never tolerant enough, or we are always already too tolerant, neglecting the rights of women, etc. The only way to break out of this deadlock is to move beyond mere tolerance or respect of others to a common struggle.

Žižek then proceeds to the proper framing of Europe’s refugee crisis:

One must thus broaden the perspective: Refugees are the price of global economy. In our global world, commodities circulate freely, but not people: new forms of apartheid are emerging. The topic of porous walls, of the threat of being inundated by foreigners, is strictly immanent to global capitalism, it is an index of what is false about capitalist globalization. While large migrations are a constant feature of human history, their main cause in modern history are colonial expansions: Prior to colonization, the Global South mostly consisted of self-sufficient and relatively isolated local communities. It was colonial occupation and slave trading that threw this way of life off the rails and renewed large-scale migrations.

Then he draws the lesson from this new reality:

The main lesson to be learned is therefore that humankind should get ready to live in a more “plastic” and nomadic way: Rapid local and global changes in environment may require unheard-of, large-scale social transformations. One thing is clear: National sovereignty will have to be radically redefined and new levels of global cooperation invented. And what about the immense changes in economy and conservation due to new weather patterns or water and energy shortages? Through what processes of decision will such changes be decided and executed? A lot of taboos will have to be broken here, and a set of complex measures undertaken.

First, Europe will have to reassert its full commitment to provide means for the dignified survival of the refugees. There should be no compromise here: Large migrations are our future, and the only alternative to such commitment is a renewed barbarism (what some call “clash of civilizations”).

Second, as a necessary consequence of this commitment, Europe should organize itself and impose clear rules and regulations. State control of the stream of refugees should be enforced through a vast administrative network encompassing all of the European Union (to prevent local barbarisms like those of the authorities in Hungary or Slovakia). Refugees should be reassured of their safety, but it should also be made clear to them that they have to accept the area of living allocated to them by European authorities, plus they have to respect the laws and social norms of European states: No tolerance of religious, sexist or ethnic violence on any side, no right to impose onto others one’s own way of life or religion, respect of every individual’s freedom to abandon his/her communal customs, etc. If a woman chooses to cover her face, her choice should be respected, but if she chooses not to cover it, her freedom to do so has to be guaranteed. Yes, such a set of rules privileges the Western European way of life, but it is a price for European hospitality. These rules should be clearly stated and enforced, by repressive measures (against foreign fundamentalists as well as against our own anti-immigrant racists) if necessary.

Clearly, the world of Herder’s enclosed volksgeist, which still lives on in the reticent souls of those Europeans uneasy with the “plastic” reality of globalization, must give way to the world of Žižek. But in the transition, let’s be careful not to affix a politically correct label to the nostalgia that authentically worries about “desiccation of everything that is human” as something other than it is.