HONG KONG — Brawls, insults and citizen’s arrests were the orders of the day here in Hong Kong’s Mong Kok neighborhood, the center of the most intense clashes between pro-democracy occupiers and residents who tried to dislodge them — violently if necessary.

In one incident below ground in the Mong Kok subway station, a shouting match between young demonstrators and anti-occupiers quickly spiraled out of control, drawing dozens of onlookers as it became an all-out brawl. Police attempting to mediate the initial conflict were helpless as the crowd joined in the melee, pounding on each other’s heads and kicking those who fell to the ground. The two sides were separated within a few minutes, but violence in the area continued into the night.

In the moments before the fight broke out, a young man in a black T-shirt yelled, “You attack students, are you going to attack me?” (Watch the clash in the video above.)

Student-led protests in Hong Kong have brought traffic and commerce to a standstill in the Asian financial center, with demonstrators demanding an end to Beijing’s role in choosing candidates for Hong Kong elections. Protesters enjoyed sympathy from the city’s residents after suffering police tear gas assaults last Sunday, but as the demonstrations continue to obstruct daily routines, some residents’ patience has worn thin.

Occupy demonstrators hold their line in Mong Kok during a face-off with anti-occupy forces that had earlier driven them from the area. (Matt Sheehan)

Pro-democracy protesters in the area have asserted that hired thugs from local gangs, including the infamous Triads, are instigating violence. In response to what demonstrators described as a failure of police to protect students from violent gangs, protest organizers with the Hong Kong Federation of Students postponed talks with local government officials on Friday. And as night crept over Mong Kok, groups of demonstrators periodically encircled and detained people they thought had attacked students or were paid instigators, demanding that police arrest them. Officers appeared to release several of the people suspected by the crowd, causing tensions to flare. 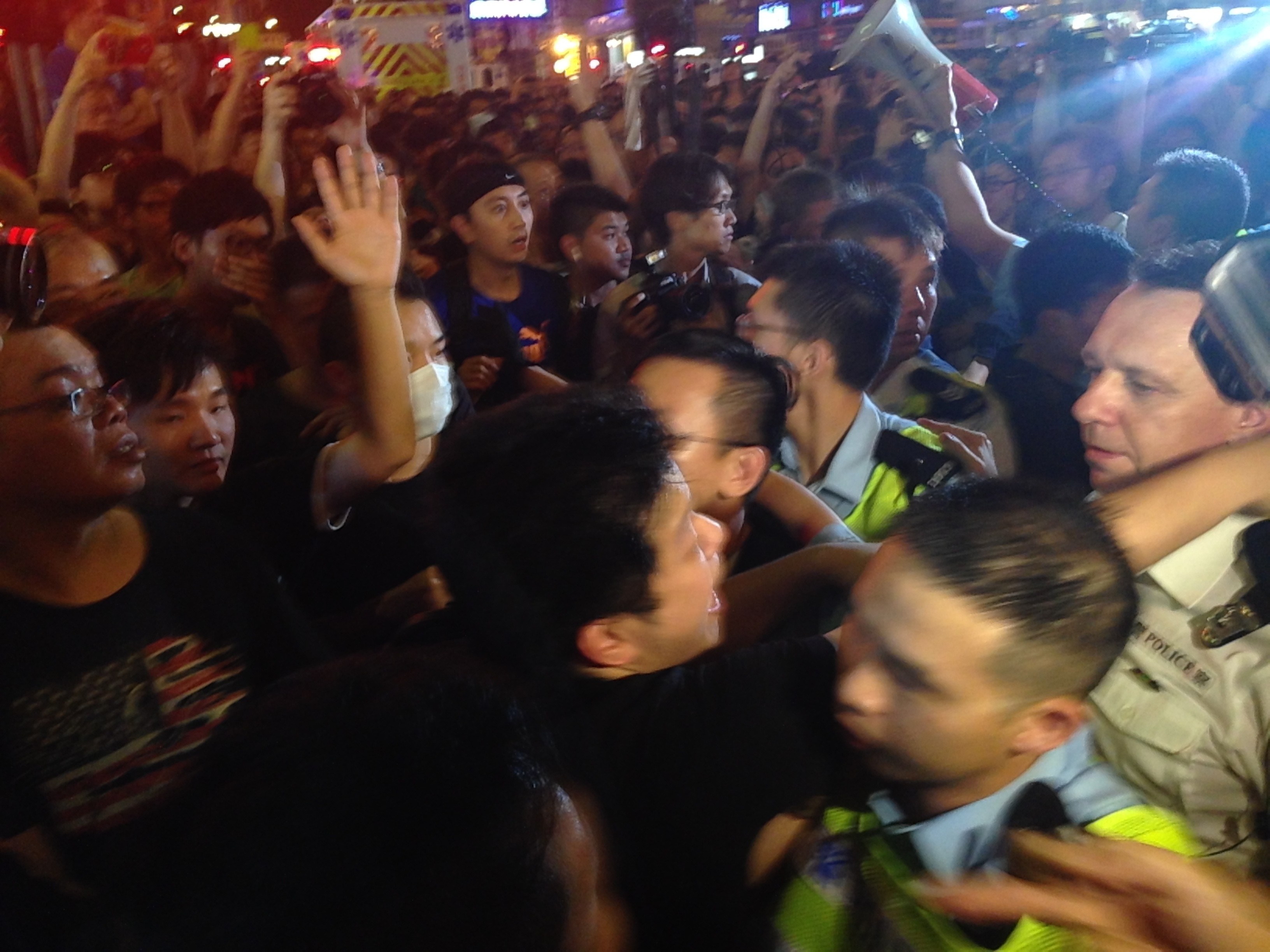 Looking back on several of the skirmishes during the day, one protester told the WorldPost, “My parents run several mahjong gambling houses here and in the mainland, so I’m real clear on what local gangsters look like. Those guys were gangsters.”

Earlier in the night, the leading protest groups called on occupiers to leave the Mong Kok area and consolidate forces near the government headquarters in Admiralty. There, protesters enjoyed the calm granted by an extended buffer zone of blockades and scout posts. 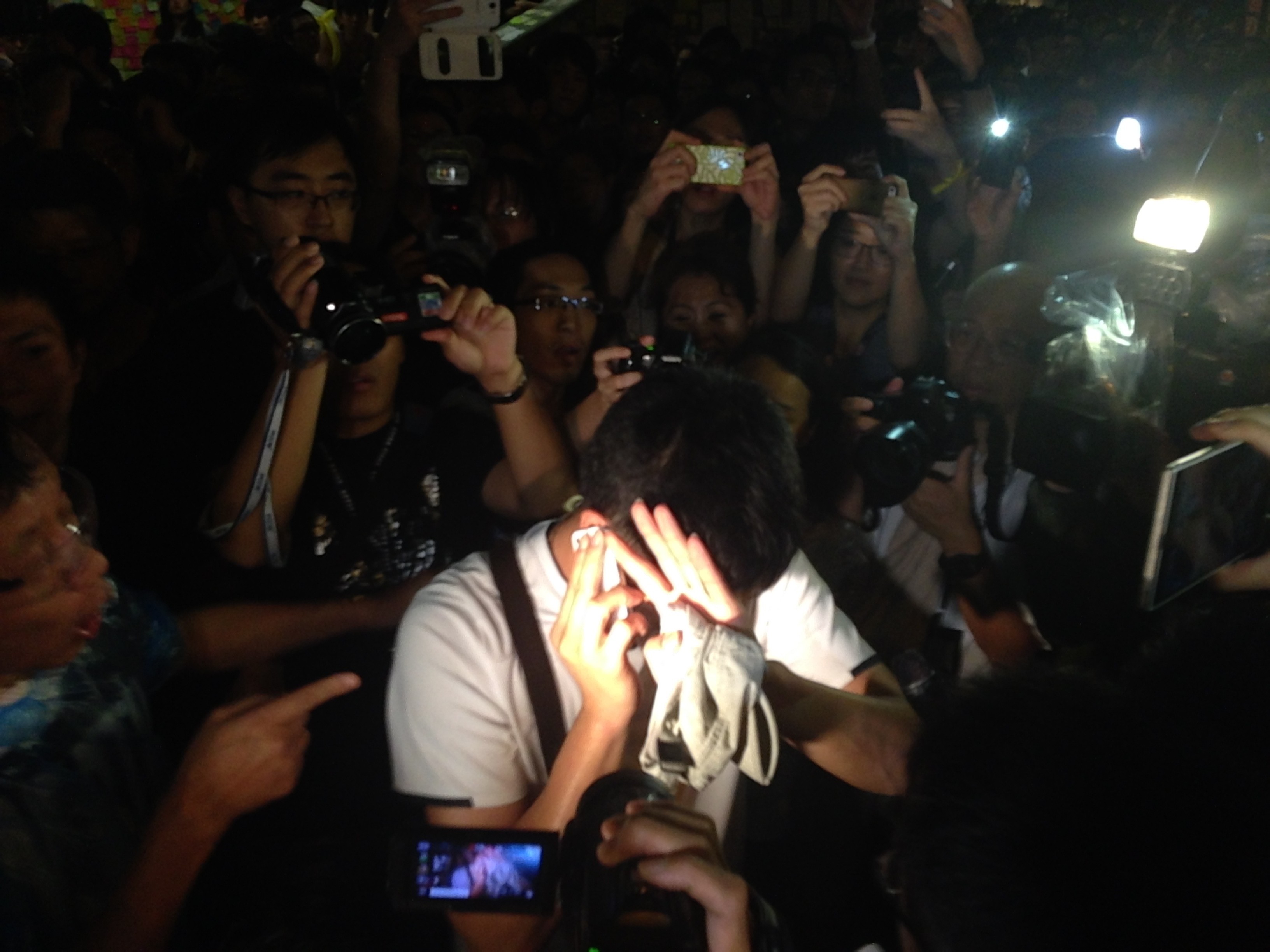 The crowd closed in on a man in Admiralty. (Matt Sheehan)

At 11:30 p.m., students in Admiralty also surrounded a man accused of acting as an infiltrator, encircling him with hands raised and camera phones clicking. The man remained trapped for several minutes while he was incessantly photographed and taunted, but no violence appeared to occur. Eventually, the man was escorted away from the protest.

Reports of violence in Mong Kok continued to stream in, but demonstrators in Admiralty passed the hours after midnight playing cell phone games and holding large group singalongs.