BEIJING — The title of U.S. President Barack Obama‘s pre-presidential biography is “The Audacity of Hope.” Chinese President Xi Jinping has written his own document released this week — The Communist Party’s 13th five-year plan — that might be titled “The Audacity of the Chinese Dream.”

This blueprint for China’s future signals the most momentous shift in direction since the death of Mao and Deng Xiaoping’s reform and opening up in 1978. Not a leader to rest on the laurels of his country’s success so far in rising to the top ranks of the global economy, Xi wants to leap over the “middle-income trap” in which development becomes stuck in a low-wage manufacturing export economy. To do that, he needs to avoid, in his own words, the “Thucydides trap” of conflict between China as a rising power and the U.S. as the established power so instability does not disrupt growth prospects.

As Xi and his top Politburo colleagues explained to the Berggruen Institute’s 21st Century Council’s “Understanding China” conference on Nov. 3 in Beijing, China’s new plan lays out a path to the Third Industrial Revolution in which wealth is created by what the Chinese call “Internet Plus“ connectivity, market-based innovation, green growth and cities integrated into regions through smart infrastructure. The annual high growth rates of recent decades sustained by massive inputs of labor and capital are running out of steam, Xi acknowledged, slowing to a “new normal” of around 6.5 percent — a figure many regard as dubious. Whether history will reward Xi’s audacity remains to be seen, especially as worrying debt levels continue to rise as growth slows. There is no precedent for the scale and scope of what China is now trying to accomplish.

In our meetings in Beijing we also heard firsthand a report on the intensive anti-corruption campaign from a top official of the Party’s Central Commission for Discipline Inspection. We candidly debated the difference between “rule of law,” by which an independent judiciary protects citizens, and China’s “rule by law” according to Party leadership with the vice president of the Supreme People’s Court. We sparred with Internet czar Lu Wei over where to draw the line in balancing “freedom” and “order” in society. We also discussed the confrontation between the U.S. and China in the South China Sea with the deputy chief of staff of China’s military, who decried American “provocation” and aggression but nonetheless ruled out cutting military-to-military relations. Key officials spelled out their ambitious vision of recreating China’s ancient Silk Road for the 21st century, linking up the world with trade deals and infrastructure projects from Beijing to Istanbul.

Writing from Istanbul, WorldPost Middle East Correspondent Sophia Jones describes how the left is reeling after President Recep Tayyip Erdogan’s party, the AKP, made a surprising comeback in Turkey’s election. Yusuf Muftuoglu, who was advisor to former Turkish President Gul, explains how Erdogan’s party managed to regain its parliamentary majority. Fréderike Geerdink chronicles how the AKP’s campaign was “all but democratic,” given the government’s violence, further control over the press and detention of opposition politicians. Suat Kiniklioglu says that Turks chose “the devil they know — and stability over freedom.” Behlül Özkan argues that under Erdogan’s increasingly Islamist rule, Turkey is proving Samuel Huntington’s “Clash of Civilizations” right.

World Reporter Charlotte Alfred details what we need to know about the Islamic State’s Sinai affiliate, which claimed responsibility for the downing of a Russian plane in Egypt’s Sinai Peninsula — although authorities haven’t confirmed ISIS involvement. Sophia Jones and Akbar Ahmed report that the latest potentially “fatal flaw” in U.S. President Barack Obama’s ISIS strategy is that America’s increasing coziness with and arming of Syrian Kurds have made Turkey nervous.

Bernard-Henri Lévy agrees with Obama and French President François Hollande’s statements that there is no viable solution to the Syrian crisis that includes the political survival of Syrian President Bashar al-Assad. Charlotte Alfred and Rowaida Abdelaziz report that Syrians and Iraqis are being pushed to decide between poverty, escape or joining the Islamic State. Jill Goldenziel maintains that we’re putting refugees’ lives in danger by not clarifying what it takes to get asylum in Europe. World Reporter Nick Robins-Early takes a look at Canada’s bold plan to rapidly resettle 25,000 refugees.

In our “Following Francis” series, Sébastien Maillard suggests that the latest scandal to emerge from the Vatican — “Vatileaks 2” — reveals that Pope Francis’ friends in the Vatican may be numbered. Ayaan Hirsi Ali makes the case that “feminism’s counter-revolution” is the “massive erosion of women’s rights that is currently underway in the Muslim world.”

Ban Ki-moon bemoans the lack of response to an erosion of respect for human rights and international humanitarian law in conflict regions. Ahead of Myanmar’s election Sunday, Emanuel Stoakes urges the international community to move to prevent genocide of the country’s Rohingya Muslims — before it’s too late. In this week’s “Forgotten Fact,” Nick Robins-Early explores why brutal attacks on Bangladesh’s secular writers won’t stop. Marvin G. Weinbaum stipulates that the key to reviving an Afghan peace process may just be the Taliban.

Writing from Athens, Danae Leivada tells us about a group that, amid Greek austerity, fights for people with mental illness. In a photo series, artist Nikos Papadopoulos, also known as Mr. Plasticobilism, tells Greeks’ stories through Playmobil figures. Robert Reich postures that our inequality discussion is ignoring the hidden “upward redistributions going on every day, from the rest of us to the rich.”

Johannesburg Mayor Mpho “Parks” Tau tells us that Johannesburg is looking to Copenhagen as a model since the Danish city has come a long way from its car-clogged days in the 1960s. Michael Dobson breaks down the four issues that will make or break the Paris climate talks. Chandran Nair cites a shocking finding that record forest fires in Indonesia in three weeks emitted more carbon than Germany has all year — and urges the international community to step in. Through photos, we follow Slovenian photographer Ciril Jazbec‘s mission to capture the human face of climate change.

Minxin Pei warns that the damage from China’s recently abolished one-child policy is far from over — and that the new two-child policy isn’t much better. Yan Xuetong takes us inside the China-U.S. competition for strategic partners. In a podcast, Eric Olander and Cobus van Staden walk us through what to expect at this year’s mega China-Africa summit.

Joseph Nye contends that as Japanese Prime Minister Shinzo Abe sat down this week in Seoul with South Korean President Park Geun-hye and Chinese Premier Li Keqiang, he did so as the leader of a country that many people around the world now seriously underestimate. Andrew Kwon asserts that despite lingering hopes, the recent program of reunions between North and South Korea will not lead to a diplomatic breakthrough. In a photo series, we go inside some North Korean buildings to admire the Wes Anderson-like colorful and symmetrical interior design and “Juche” architecture.

In our continuing series on the Third Industrial Revolution, I lay out how China’s new five-year plan, as Premier Li told us, advances a “new type of industrialization through the application of Internet technologies, urbanization and agricultural modernization.” In the same series, writing from Copenhagen, Guido Bartels illustrates how the Internet of Things will change the way we communicate and do business. Peter Diamandis applauds Russian billionaire Yuri Milner’s $100 million effort to find extraterrestrial life. Fusion details how to know if you have “nomophobia.” Finally, our Singularity series this week looks at technologies that will shift the global balance of power in the next 20 years. 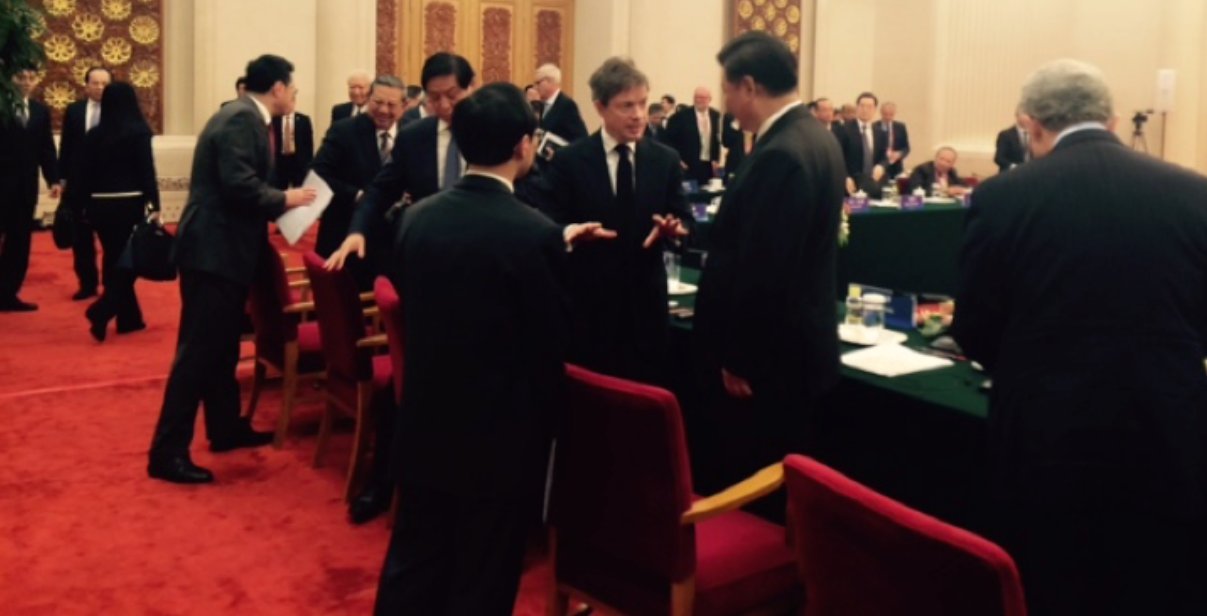 Nicolas Berggruen talking with Xi Jinping at the Great Hall of the People, Beijing, on Nov. 3, 2015. (Berggruen Institute)