Google and Facebook would love to operate in China, especially now that it’s officially confirmed that it has 668 million Internet users. One man stands in their way: China’s all-powerful Internet czar, Lu Wei, whose official title is Minister of Cyberspace Administration. Standing behind Lu is 3,000 years of Chinese political culture that is diametrically opposed to the libertarian ethos of Silicon Valley. The ideology encoded in the technological innovations of California’s software engineers — to empower the individual and dispense with governing intermediaries — contrasts sharply with the long history of China’s “institutional civilization” that, for centuries, has empowered state authorities to rule on behalf of the people. Chinese President Xi Jinping is surely right when he told the World Internet Conference in Wuzhen this week that “freedom and order are both necessary in cyberspace.“ But where that line is drawn makes all the difference.

Fundamentally, these cultural preferences inform the political boundaries being traced today that are splintering the promise of cyberspace as a virtual territory without borders. Already, Shanghai-based scholar Zheng Weiwei observes in The WorldPost‘s recent analysis of the global online conversation, “the Chinese Internet world is a universe unto itself.“

As curator-in-chief of cyberspace with Chinese characteristics, Lu Wei has made no bones about his power to choose who is invited into the sovereign space he manages. “We do not welcome those who make money off China even as they slander China’s people,” Lu has said. “These kinds of websites I definitely will not allow in my house.”

Political leaders in the West, like Hillary Clinton, have said in the past that they want an open house. “Countries that restrict free access to information or violate the basic rights of Internet users risk walling themselves off from the progress of the next century,” she said when U.S. Secretary of State. Yet, in the wake of Wikileaks, the Snowden revelations and terrorism tied to digital networks, even authorities in the West are now seeking more control over those who would hack personal data, post secrets, vent hate or plot jihad on the web. And they are targeting Silicon Valley’s encryption practices that keep governments seeking security for their citizens in the dark.

In short, as Naval War College scholar Peter Dombrowski writes, nation-states everywhere are “re-bordering” cyberspace. “China may be more explicit about ‘Internet sovereignty,’” he says, “but the U.S. and other Western nations themselves have encouraged the emergence of virtual borders as both a prudent response to the demands of civil society and as a means to promote their preferred modes of governance. China simply represents an extreme example of a much wider phenomena.” President Xi would agree. “Sovereignty is one of the basic norms in contemporary international relations,” he said in Wuzhen. “It covers all aspects of state-to-state relations, which also includes cyberspace.”

To explore the issue, WorldPost China correspondent Matt Sheehan talks with Danwei.com founder Jeremy Goldkorn, who has been following the evolution of China’s “Internet sovereignty” policy over recent years. Sheehan also reports on the melee outside a Beijing courthouse where human rights lawyer Pu Zhiqiang was standing trial for “picking quarrels and provoking troubles” through his posts on Sina Weibo. 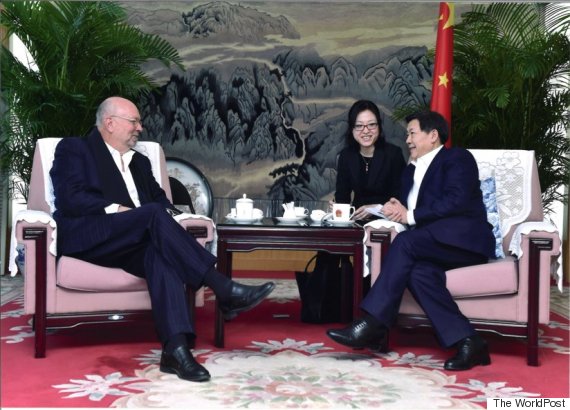 After much anticipation, nearly 200 nations reached an agreement Saturday in Paris to cut carbon emissions in coming decades. Al Gore hails the accord and says Dec. 12, 2015 will be remembered “as the day when the community of nations finally decided to act.” Michael Mann writes that “while the commitments made in Paris aren’t on their own enough to stabilize greenhouse gas concentrations at safe levels, they are enough to begin bending the emissions curve towards a safe climate. Paris is a beginning of a process.” Michael Dobson notes that the Paris agreement shows the way forward on climate change, but now we need to ensure countries abide by it. Yvo de Boer, who headed the U.N. climate body from 2006-2010, sees the embrace of a green growth path by developing nations, including China, as historic. Writing from New Delhi, Arun Maira, former member of the Indian Planning Commission, argues that, given environmental constraints and automation of industry, his country’s development strategy cannot mimic China’s rise.

The WorldPost partnered this week with the Center for Public Integrity to publish an investigative report exposing nuclear contamination in Jharkhand, India. The report has prompted India’s National Human Rights Commission to put the Department of Atomic Energy and other agencies in India on notice that they must answer the allegations that, if true, would prove “serious violations of the right to health of the workers and local residents.”

Writing from Paris, philosopher Bernard-Henri Levy is overjoyed that French voters turned out en masse in the second round of regional elections to defeat the anti-immigrant National Front Party of Marine Le Pen. Writing from Buenos Aires, Jordana Timerman and Carlos Malamud assess the tough economic challenges the new Argentine president, Mauricio Macri, faces in the aftermath of Cristina Kirchner’s populist rule that left a legacy of debt and high inflation. IMF Executive Director Otaviano Canuto worries that there are insufficient foreign exchange reserves in many emerging markets to counter the impact of capital outflows as the U.S. Federal Reserve raises interest rates. Writing from Moscow, the former Deputy Director of Russia’s Central Bank, Sergei Aleksashenko, sees the situation as not just bad, but “ugly.” “The gradual dismantling of state institutions,” he says, “led first to a decline in investments, then to a sharp drop beginning in 2013, and finally to massive capital flight, with economic growth slowing to a halt by mid-2014.”

Queen Rania of Jordan says the fight against what she calls “irreligious terrorists” is not “any country’s war. This is every country’s war.” Sociologist Charles Kurzman ponders the fear stalking America after the San Bernardino attacks. Americans, he writes, “are so fixated on one form of violence — Islamic terrorism — that they do not notice how rare it is. … Instead of treating them as rare crimes, we have adopted a zero-tolerance policy toward Islamic violence, putting ourselves on a permanent war footing.”

Writing from Beirut, former MI6 agent Alastair Crooke sees signs that the U.S. is shifting course in Syria, backing off from regime-change demands and coming to accept Russia as a partner in forging a peace deal. World Reporter Charlotte Alfred profiles the lives of some of the 6,700 detainees that Human Rights Watch says died in custody of the Syrian government. Yasmin Nouh looks at the devastation wrought in Aleppo, most recently from Russian airstrikes. Writing from Moscow, Maria Snegovaya surveys what the Russian public really thinks about Russia’s military involvement in Syria. Iranian dissident Akbar Ganji discusses the role of Ayatollahs and Muftis in challenging narratives that claim pious motives in acts of terror. Katerina Prifti reports firsthand from Idomeni, Greece that thousands of refugees are stranded in a border camp there with nowhere to go. We also post a heartrending photo essay by Italian photographer Alessandro Penso of refugees who have landed on Kos and Lesbos.

A photo essay in our Other Hundred series profiles a female-owned and operated auto mechanic business in Dakar, Senegal. Fusion this week suggests we stop blaming the Internet for terrorism and accept that “to enjoy the wonders that come from global communication, we have to put up with some of the terrible aspects too.” Our Singularity series this week reports on robots “that learn as effortlessly as babies.”