Does anybody remember the old Cold War geopolitical concept of the “northern tier states?” They consisted of three countries — Turkey, Iran and Pakistan (and sometimes Afghanistan) that lay along the southern border of the Soviet Union; they were perceived in the West as a potential bulwark against Soviet aggression southward into the Middle East. Is it possible that today we are witnessing the recrudescence of a “northern tier” bloc? This time, however, the bloc would not be united against Russia at all. On the contrary, these three states demonstrate warming congeniality with many aspects of Russian, Chinese and Eurasian geopolitical views.

The ongoing crisis in Yemen may have become the midwife to such a development. If so, it is Iran that seems to be pulling the pieces together of a new loose power coalition in the Middle East.

Saudi Arabia’s much-publicized creation of a Sunni coalition to fight “the Iranian and Shiite threat” in Yemen and the Gulf recently took two major body blows: the unexpected defection of both Turkey and Pakistan as active partners in Saudi Arabia’s military campaign in Yemen, after having initially indicated they would join in.

Yes, it’s notable that Turkey, Iran and Pakistan are all non-Arab states in the Middle East. But in speaking of a new “northern tier,” we’re not really talking about an Arab versus non-Arab bloc. The differences are more ideological and geopolitical; they involve differing visions of the future that may reorder the geopolitical map in the Middle East. The “northern tier states” could come to constitute a new informal power bloc that challenges Riyadh’s bold, new, reactionary ambitions in the region.

Two differing narratives of the struggle in Yemen now compete.

The Saudis boast of forging a bold and sweeping Sunni coalition to block a much-hyped threat to the Iranian/Shiite imperialism that is supposedly taking over Iraq, Syria, Lebanon, the Gulf and now Yemen. Riyadh worries that Iran will soon emerge from under U.S.-imposed sanctions to take its place as a legitimate player on the regional stage. Washington is no longer perceived as a reliably anti-Iranian force.

“Washington is no longer perceived as a reliably anti-Iranian force.”

But an alternative narrative suggests a different source of Saudi fear — one that stems not from theological disagreement at all, but from fear of the political goals of the Iranian revolution: revolution, overthrow of entrenched elites, anti-monarchical posture, support for meaningful democratic structures (yes, Iran’s parliament is more activist and independent than almost any Arab state’s), a direct challenge to the long-standing American political and military domination of the Middle East, strong support for the Palestinian cause and a feisty nationalism. Much of the “Arab street” has admired Iran for its independence and guts in challenging Washington.

Turkey, of course, has the best and most well-established and well-functioning democracy in the region, notwithstanding sometimes rough domestic politics. And Pakistan, along with its Islamic trappings, has operated within democratic structures for many decades, albeit punctuated by periodic military rule. All three represent “modern” states in terms of institutions, and their strikingly developed and diversified economies and class structures.

These states differ in yet another major respect from the Arab states of the Middle East. Turkey and Iran maintain strong national identities, which Pakistan is striving to build based on a strong regional personality. All three are multi-ethnic states, but the legitimacy of national identity among them is basically not open to challenge, although work to reconcile some domestic minority dissatisfaction is still needed. The future concept and borders of these states is not in question (although Pakistan has been severely shaken by the destructive fallout from the failing U.S. war in Afghanistan).

It is much harder to say this about most Arab states today. Only Egypt has a strong regional identity within classic geographic borders, and its potential as a “modern state” has been crippled by long-standing bad governance. It no longer has any vision for the region or the Arab world — neither Islamist, nor Arab nationalist, nor democratic, nor socialist. Few other major states in the Arab world are politically functional today either. Iraq had a Mesopotamian identity, but war has destroyed it for the foreseeable future. The small Gulf states, while often reasonably well-run, live off oil and are archaic and defensive in their political and social structures. Stability, where it exists in the Arab world, is largely imposed by monarchs and presidents-for-life.

What happened to bring about a Turkish turnaround on the Saudi coalition? I was frankly surprised at Ankara’s initial support in March for Riyadh’s campaign in Yemen, and more so at Erdoğan’s harshly outspoken criticisms of Iran’s role in the region at the time. This short-lived Turkish turn to Riyadh stood in direct contradiction to long-standing Turkish policies. In my recent book, Turkey and the Arab Spring, I describe Ankara and Riyadh as essentially representing ideological polarities: on sectarianism, democracy, globalization, secularism, multiculturalism, modernity and the Muslim Brotherhood. They agree only on the need to overthrow the Assad regime.

Perhaps Erdoğan’s early decision was best understood as opportunism — an initial concern not to be left out of what might become a “new Arab force.” Yet, during a relatively tense visit to Tehran in early April, Erdoğan backed away from further criticism of Iran and from participation in the Saudi campaign against Yemen — a notable slap in the face to Riyadh. Iran is still the most important country to Turkey in the Middle East in economic, energy and geopolitical terms. And Ankara must be mindful of its own large Alevi (quasi-Shiite) minority. How much did Iran influence this sudden change of heart? 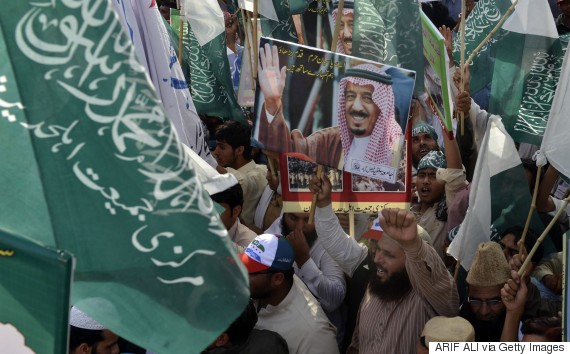 No less dramatic was Pakistan’s about-face. Initially, Islamabad seemed to look positively upon Riyadh’s call for Pakistani troops and military support in the Yemen campaign. But Pakistani Prime Minister Nawaz Sharif, despite his close personal ties to Saudi Arabia, then decided to refer the issue to parliament, well aware that public opinion in Pakistan ran against the involvement of Pakistani troops in the distant conflict. Strikingly, Iranian Foreign Minister Mohammad Javad Zarif visited Islamabad just at that time to call for joint Islamic action for a peaceful negotiated solution. How much did Iran influence the Pakistani about-face as well?

There may not yet be a new “‘northern tier” bloc as such. Yet there is much logic behind a confluence of views among these states on many issues.

Such an informal bloc would represent a significantly more progressive, moderate and forward-looking coalition than the present Saudi-driven “Sunni coalition” that is divisive, ideological, destructive and sectarian.

“The region cries out for something more progressive than the Saudi/Sunni coalition’s reactionary view of the future.”

The region cries out for something more progressive than the Saudi/Sunni coalition’s reactionary view of the future. The approbation of both Russia and China for these non-interventionist geopolitical policies of the “northern tier” lends these states even greater clout. Such a bloc would also represent a clear non-Arab vision for the Middle East at a time when the Arab world itself seems to lack any visionary and constructive leadership representing a genuinely modernist future.

Arabs may not wish to listen to non-Arabs, but they themselves offer little alternative right now in the bleak landscape of the Arab world. Hopefully, Washington will not allow itself to become stuck with the “counter-revolutionary” Arab coalition as the basis of future American policy in the area, either.