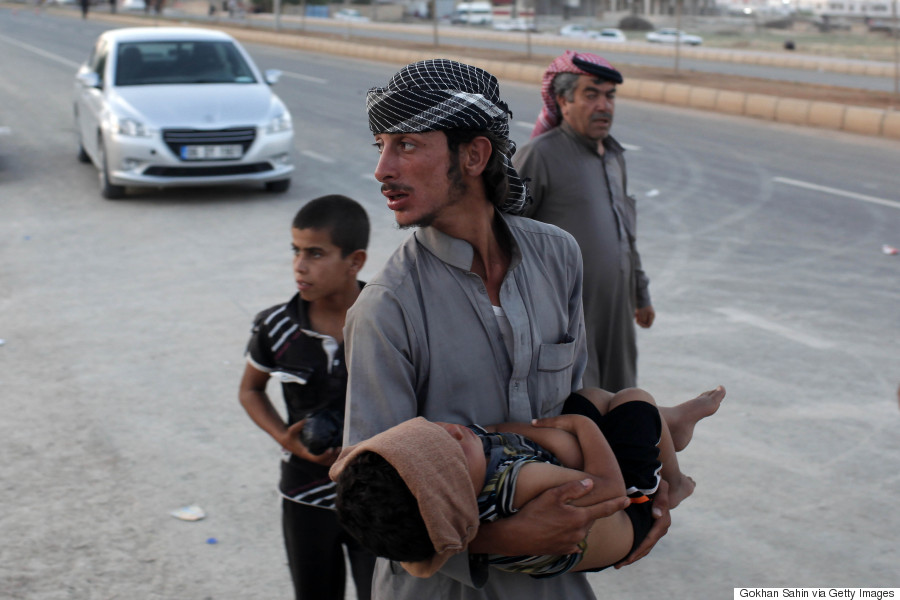 A Syrian refugee man carries a small child after crossing into Turkey at the Akcakale border gate on June 16, 2015.

AKCAKALE, Turkey — Here at the Akcakale border crossing into Syria, refugees who were under Islamic State rule just a few days ago fiercely debated each other over the powerful extremist group.

“ISIS is God’s rule,” one young man said as his family sat next to the border in the baking heat. A flurry of voices responded, some in anger, others in solidarity.

“You’re not afraid of God — you’re just afraid of ISIS!” another man boomed.

When ISIS took over towns in northern Syria last year, many civilians stayed put, choosing extremist rule over abandoning their homes and farms for a life of destitution as refugees in Turkey.

But when the Kurdish People’s Protection Units, backed by the Free Syrian Army and U.S.-led airstrikes, launched an offensive last week to retake Tal Abyad, a border town linking the porous Turkish border with ISIS’ declared capital of Raqqa, many families fled for their lives.

In the past ten days alone, at least 23,000 Syrians have poured across Turkey’s border in hopes of seeking shelter from the bloodshed and uncertainty back home. 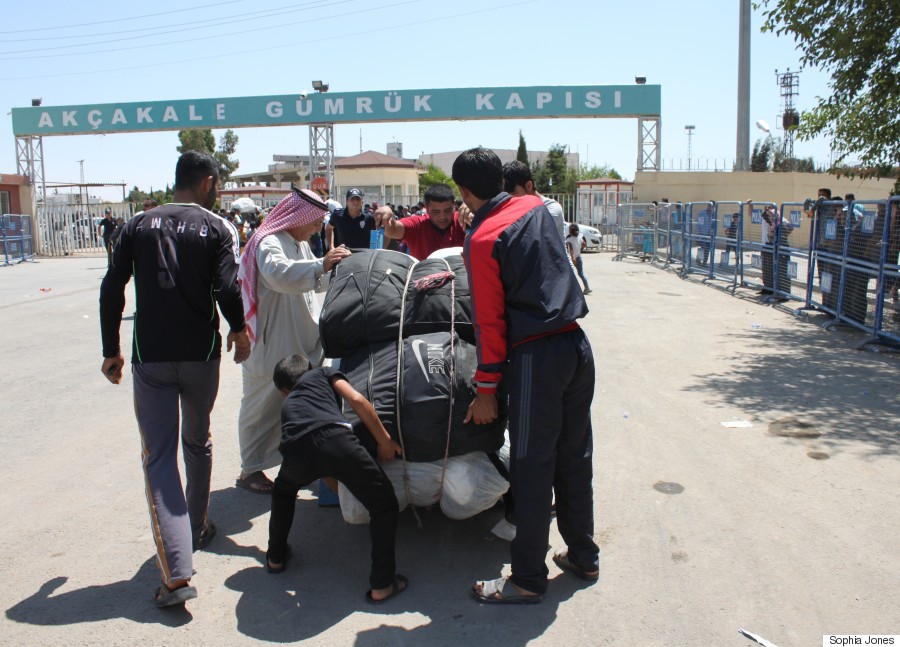 Syrians gather their belongings to return to Syria on June 17 after fleeing clashes between ISIS and Kurdish forces, backed by the FSA and US strikes, earlier in the week.

The Akcakale border crossing has been a scene of chaos and desperation, with Syrians tearing through border fences and handing wailing children to people on the other side.

On Wednesday, several hundred Syrians, many of whom have been sleeping outside because refugee camps and shelters were full, decided to cross back to Tal Abyad. Kurdish and FSA fighters have asked them to return, saying it’s once again safe, despite rumors of ISIS-placed land mines and booby traps.

Several refugees said they recognized ISIS militants in the crowd with recently shaved beards. There are rumors that ISIS fighters, even commanders, escaped to Turkey in the rush of refugees.

Now there’s another regime change in Tal Abyad. Syrians, after being tossed around from the oppressive Syrian regime to forces including the Free Syrian Army, Ahrar al Sham, Jabhat al Nusra and ISIS, look back on the extremist group with mixed emotions. It remains to be seen what life will be like now that ISIS is gone and the Kurdish fighters and FSA have taken over — for now.

The WorldPost sat down with Syrians in Akcakale to discuss life under ISIS rule. Here are some of their testimonies. 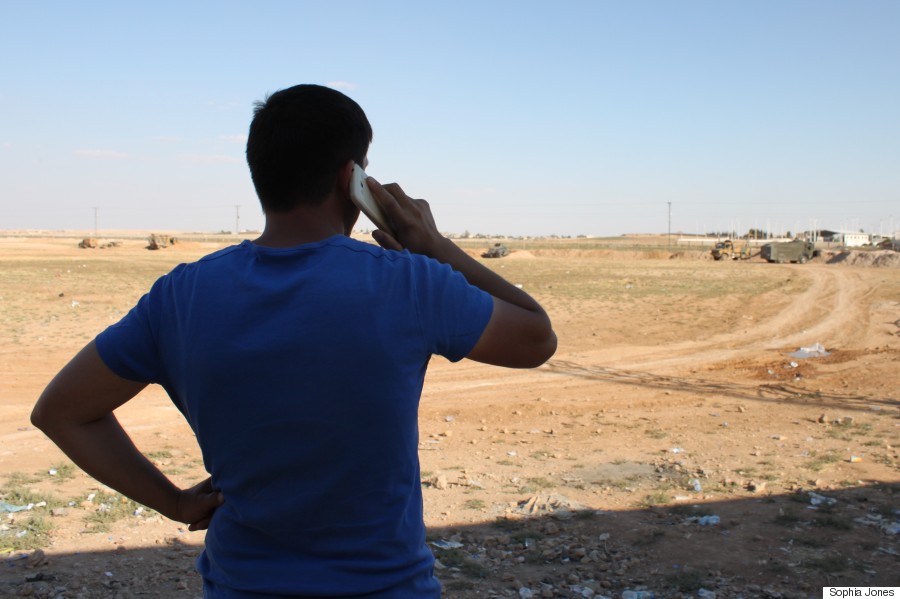 A Syrian man watches the border from Akcakale crossing as he anxiously waits for his family to safely make their way to Turkey after fleeing clashes in Syria between ISIS and Kurdish forces backed by US-led strikes and Free Syrian Army forces on June 16, 2015.

“With dawla, I was safe,” al Mously said, using the Arabic term for “the state” in reference to ISIS. “Prices rose but there was security.”

The extremist group’s power and supposed ability to bring stability won over the young baker, who became a firefighter when the revolution and subsequent war erupted.

“Yeah, they whipped and hit people, but if you walk the straight and narrow, you’re okay,” he said.

Many Muslims around the world have decried ISIS for its violent interpretation of Islam. Al-Mously insisted he was never forced into conscription, but instead urged to study the Quran.

He was not religious before the war, a fact some of the boys around him joke about now that he has declared himself a religious man.

“There is no fun after work,” he said, shielding his eyes from the afternoon sun. “I don’t play football or cards anymore. Now, I study Sharia. It’s God’s law.”

“People were getting killed and Islam came to bring us together.” 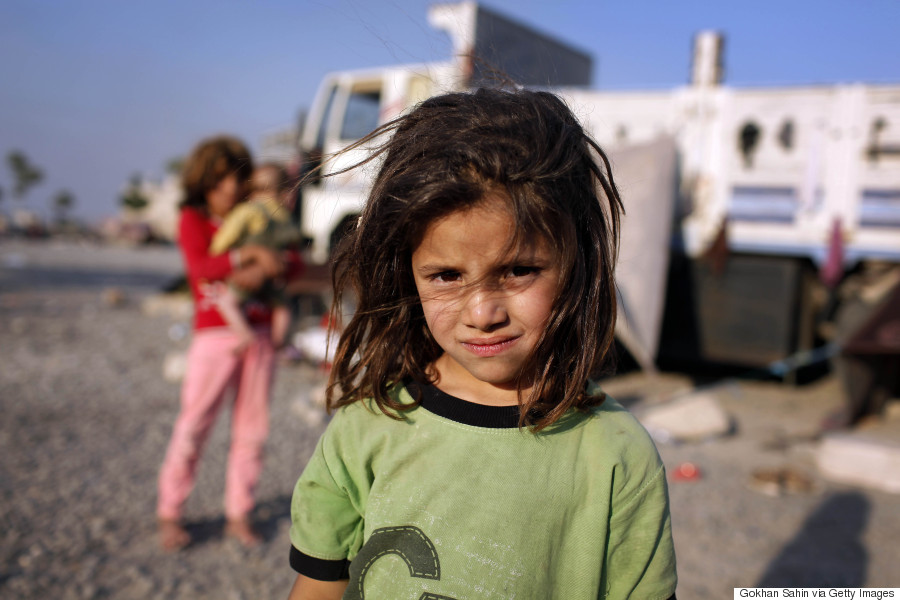 A young Syrian refugee poses for a photograph on June 17, 2015. Her family lives in their makeshift shelter near a truck close to the Turkish border post of Akcakale.

“If they saw women walking alone, they would beat [them]” the young woman recounted, sitting with her husband, parents and nephews. “So I followed their rules. They humiliated people beyond belief. “

Her young nephews, all school age, couldn’t attend school because ISIS closed academic institutions, instead opening religious centers where youth could study the Quran and Islamic teachings as dictated by the hardline fighters.

Many of the fighters in Tal Abyad were foreign, European-looking men who married local women in the area, according to the woman and her husband, Abu al Raqqawi. When ISIS fled the town, these women and their ISIS-born children were reportedly left behind.

“We had to dress according to Sharia law,” she said, wearing a long black abaya and grey headscarf. “I’m definitely not going to cover my face anymore. I hated it.”

She plans to still wear an abaya and cover her hair, she said, because she believes in dressing modestly as a Muslim woman. But she couldn’t stand covering her face everyday in a niqab — a black piece of fabric that covers the face and sometimes even the eyes.

Her mother, who called herself Umm Khalil and wore an orange and yellow dress, seethed with anger at the topic of ISIS-mandated clothing.

“I’m an older woman who can barely walk and they want me to wear a burqa?” she said. “There’s no oxygen!”

Then, throwing up her hands in the air, she declared: “I like Assad and I don’t care!” 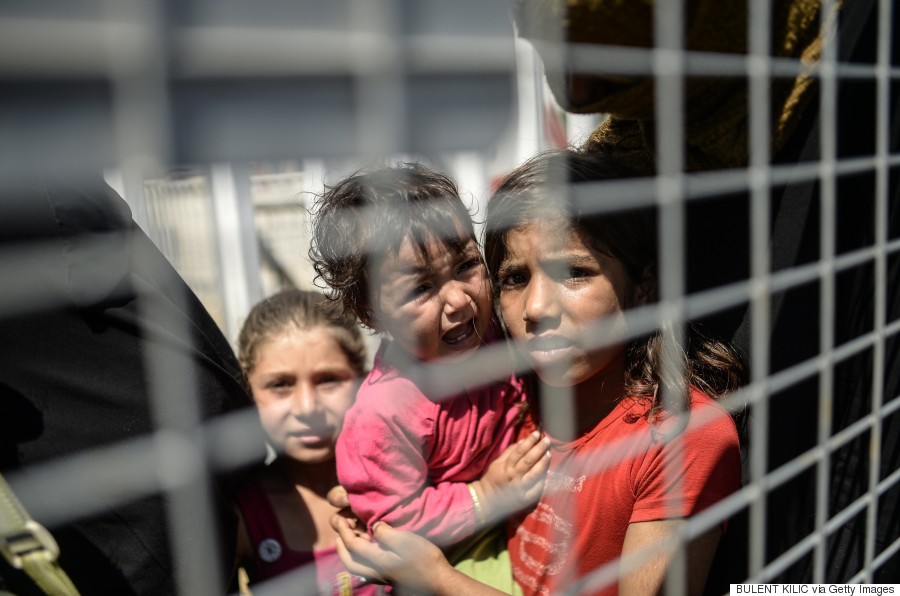 Syrian refugees wait behind a fence prior to returning to Tal Abyad on June 17, 2015.

Khalab Ibn Hamayd, a 57-year-old orange farmer from Slouk“Our village was brimming with ISIS,” Khalad Ibn Hamayd said as he sat on the floor of a half-built concrete structure with a dozen family members.

After fleeing their village of Slouk, roughly 12 miles from Tal Abyad, it took the family six days of walking and sleeping in the desert before they could finally make it across the border.

“When the FSA had control, we were living off our land and extremely happy,” Ibn Hamayd said.

Ibn Hamayd said ISIS killed two of his nephews. One was allegedly beheaded, accused of being a thief and the other was shot because he wouldn’t pledge allegiance to the extremist group.

“Who is this ISIS?” he asked angrily. “They bring the Tunisians and the foreigners, yet they tell us what to do.”

“ISIS took money from us — they’d call it charity. They took everything. They would take people’s houses. If we asked for rent, they would cut our heads off.”

“Don’t talk about the heads!” one young man said, fearfully, to which Ibn Hamayd responded with a full-bellied laugh. 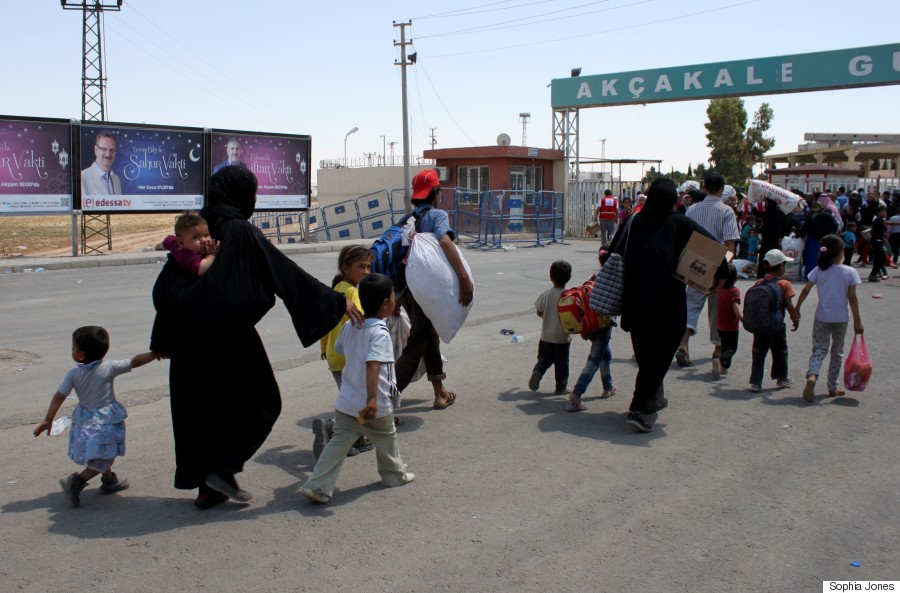 Syrians cross through the Akcakale border crossing back into Syria on June 17, 2015

Diab, a 33-year-old laborer from Maskanah and his 30-year-old wife, Umm Ali

“As soon as ISIS came, it turned our lives into destruction,” Diab said, sitting on the side of the road with his wife and young children.

Back in Maskaneh, a town just west of Raqqa that is still under ISIS control, his family was going hungry, he said.

“The prices jumped up,” he said as his children ate food donated by aid groups. “Now, I can barely buy a bag of bread.”

“We left because of hunger and because we don’t have salaries,” he said.

A young man next to him interrupted, yelling that they didn’t have salaries back when the Assad regime was in control and that nothing had changed for the better.

“If I shaved my beard, it would get me into so much trouble,” Diab said, angrily. “They whip you if you smoke.”

His wife, Umm Ali, held a malnourished 3-month-year-old infant wrapped in a blanket to shield him from the baking sun.

“We had to wear all black,” she said, wearing a fluorescent pink floral dress. “We just wanted to live. We left because we wanted a life.”