Hong Kong is slowly returning to normal. Even as student leaders begin a hunger strike, the Umbrella Movement’s two-month experiment in spontaneous street democracy is winding down, ending neither with a cold-blooded crackdown nor the jubilant dawning of a new democratic age. As city police slowly shrink protesters’ turf, the people of Hong Kong and democracy voyeurs around the world are taking stock and asking: what happened here? After all the celebration, chaos, and court orders, has anything actually changed?

The answer, of course, is nothing and everything. While the protests have run up against a political dead end, the real ramifications of the Umbrella Movement lie in the generational awakening that has hit Hong Kong and will shape it for decades to come — something strikingly similar to what America experienced in the 1960s.

“The Umbrella Movement has become Hong Kong’s Summer of Love, but with politics instead of drugs.”First though, the nothing. To date, Beijing has given zero ground on the actual concrete demands of the protesters: that the central government withdraw its election plan for 2017. That plan calls for Hong Kong’s chief executive to be elected by popular vote, but only after the candidates pass muster with a carefully curated nomination committee that will bar anyone objectionable to Beijing.

China watchers declared from the start that President Xi Jinping, who has baked Tony Soprano machismo into his public image, would not be backing down on this cornerstone of control over Hong Kong politics. For all the dramatic banners demanding “genuine universal suffrage,” come 2017, Hong Kong will almost certainly be practicing exactly the brand of universal suffrage that Beijing deems appropriate.

But that’s beside the point.

From its origins as a protest movement with a narrow set of political demands, the Umbrella Movement has morphed into a defining generational moment, one whose impact will be felt even stronger in 2027 than in 2017. Weeks camped out on city streets — fighting running battles with police and figuring out how to provide for and protect one another — have forged the social bonds and generational unity that emerges only when you mix big dreams with high drama. Throughout the tumult, protesters carved out an alternate universe with a new social order and set of values.

The Umbrella Movement has become Hong Kong’s Summer of Love, but with politics instead of drugs.

In 1967, tens of thousands of young Americans descended on San Francisco to join the Summer of Love, an ongoing festival of art, politics and social creation (as in Hong Kong, relations between locals and the “occupiers” grew tense). In the city and back in their hometowns, hippies turned rigid social conventions inside out and sounded the opening gong for transformations and culture wars that went on to redefine America. 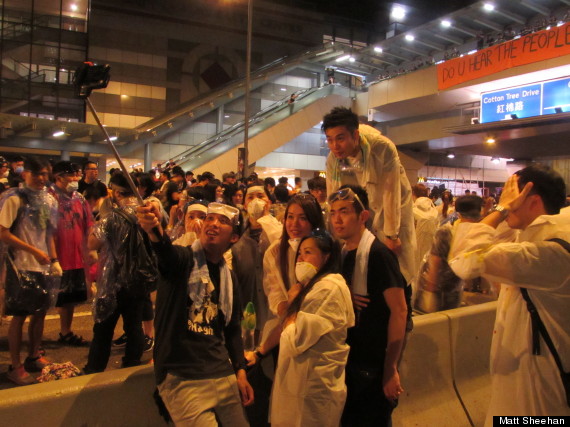 For the last two months we’ve seen the same tumult and transformation take hold in Hong Kong. Kids who had spent their whole lives in the cramped and cloistered environment of a Hong Kong household were suddenly thrown into a 24-hour slumber party, one replete with a cause to rally around, a community to create, and an air of danger to stitch it all together. That level of danger varied dramatically between different protest sites, but at the main Admiralty site, occupiers had weeks of relative calm to bask in the boundless creativity of youth united.

All this isn’t to say politics didn’t play a role: if anything, the political consciousness grew stronger as protests progressed. When I arrived in Hong Kong on Sept. 29, protest encampments and political convictions were still taking shape. Pulling protesters from the gaggles of high school students, I found many glancing at or directly reading off protest banners when explaining their reasons for coming out. Some managed to stammer out an “I want genuine universal suffrage,” but without much elaboration.

Initially at least, many participants were occupying city streets for the two reasons teenagers do anything: because it’s fun and because everyone else is doing it.

“Hong Kong youth have not achieved their political goals, but they have laid down the gauntlet.”

But as the days turned into weeks, that changed. Students who had come out for a good time found themselves listening to soapbox speakers pontificating on politics. Tens of thousands watched when student leaders debated democracy with city leaders on live television. Tug-of-wars over barricades and violent assaults on protesters turned those abstract debates into matters of survival. Young minds are malleable, and that kind of high drama leaves a deep imprint.

Hong Kong youth have not achieved their political goals, but they have laid down the gauntlet. They’ve declared themselves to be far more pugnacious and less pliant than both their parents’ generation and their mainland peers. Public opinion within Hong Kong appears to have turned against the protesters, but that has only strengthened the convictions of many that they must band together in a social-political struggle that has suddenly engulfed them.

Hong Kong and mainland China’s relationship is extremely complex, drawing its fortitude and its friction from trade and tourism as much as these political entanglements. But as mainland politicians, tourists and bankers navigate this relationship in coming decades, they will be increasingly dealing with the Umbrella Generation. This is a group who see themselves as Hong Kongers first and Chinese second, and a generation in which suspicion of elites in both Beijing and Hong Kong runs deep.

America’s Summer of Love merely sounded the opening bell in a multi-decade cultural and political transformation of the country. Looked at with historical hindsight, the Umbrella Movement will prove to be a similar turning point, one seared into the city’s memory by the birth pangs of a new generation.