Hundreds of Syrians cross the border into Jordan every day on foot. Some are the elderly walking with children and grandchildren, leaving a lifetime behind them. Others are infants cradled in their parents’ arms, too young to remember home. The refugees leave everything behind: savings, houses, pets, clothes, the fresh graves of their loved ones.

As the Syrian civil war enters its fourth year, there are more than 580,000 refugees in Jordan in both formal camps and scattered throughout the cities. Many settle in Za’atari refugee camp, an area once filled with simple tents pitched in the sand that has now become Jordan’s fourth largest city, home to more than 100,000 Syrians.

Jared Kohler, a photographer working for the United Nations High Commissioner for Refugees, is one of the few photographers who has been able to consistently document Za’atari refugee camp since its humble beginnings in July 2012, as well as other urban communities in Jordan where refugees have fled.

Through his photos, Kohler tells a story of striking human resiliency in the face of death and destruction. 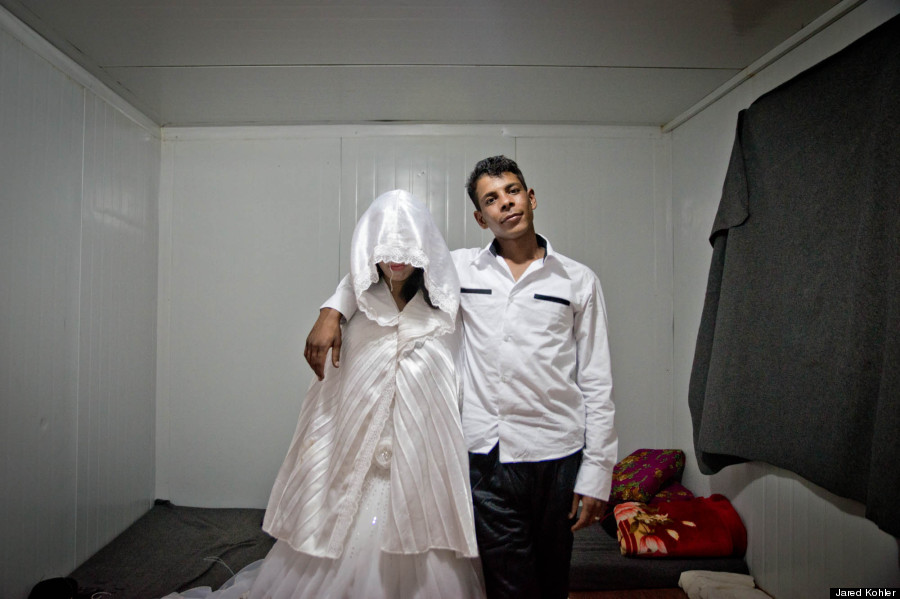 A young Syrian groom, 23, poses for a photograph with his new bride, 19, in their wedding suite in Za’atari refugee camp in September 2013. The groom was best friends with the bride’s brother before he was killed in Syria. After the ceremony, the groom whispered in his bride’s ear that he would always respect and look out for her. 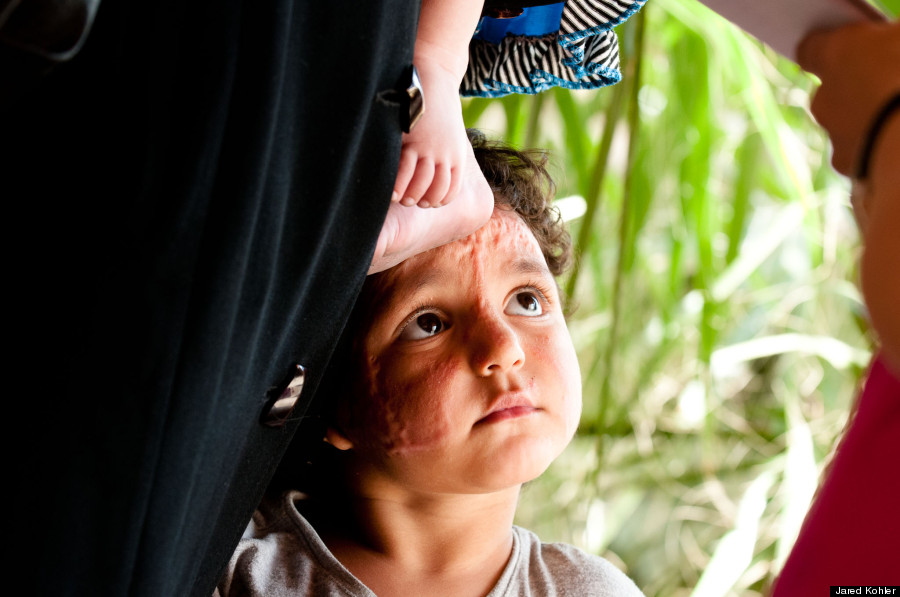 Rahaf, 3, clings to her mother, Manal, in a hospital in Amman, Jordan, in July 2012. They both have burn scars from when a rocket struck her family’s home in Homs, Syria. 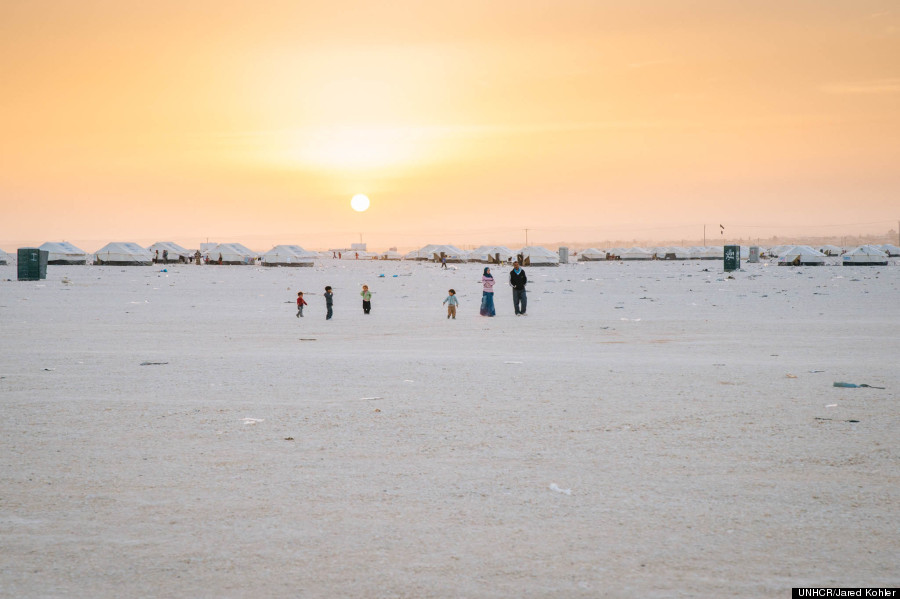 In March 2013, Za’atari had only reached a fraction of its current size and population. Most of the tents have now been replaced by more solid caravan structures. 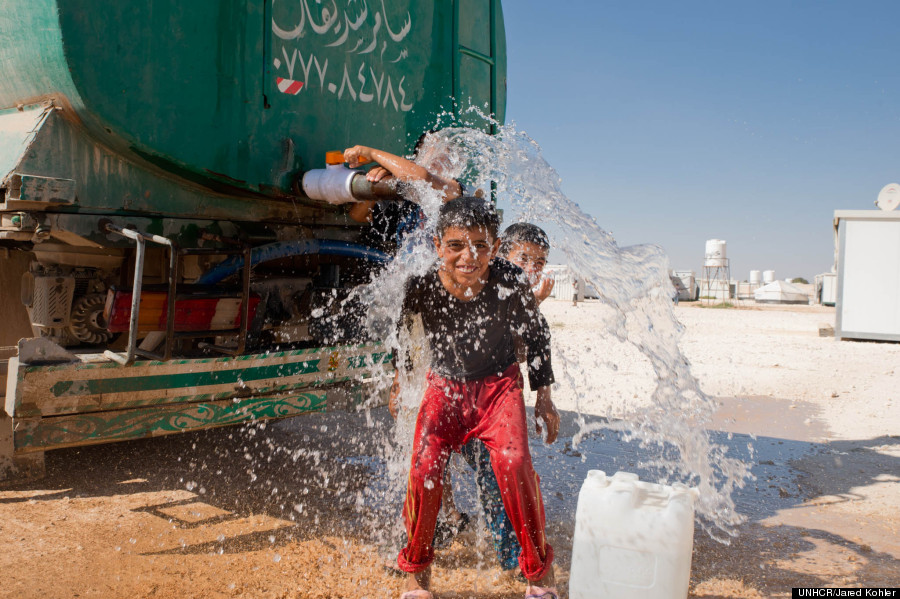 A young boy catches a splash of water from a delivery truck on a hot day in Za’atari refugee camp in September 2013. 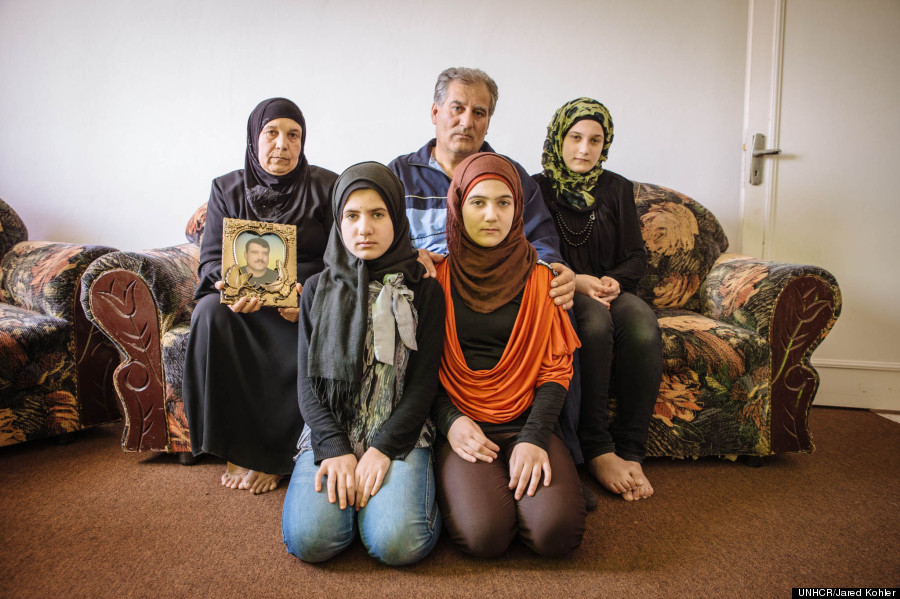 A Syrian man sits with his wife and young daughters in the apartment they rent outside of Irbid, Jordan, on May 1, 2013. When they came to Jordan, they left behind six grown children. The mother holds a picture of her eldest son, who was killed by a sniper in Syria. 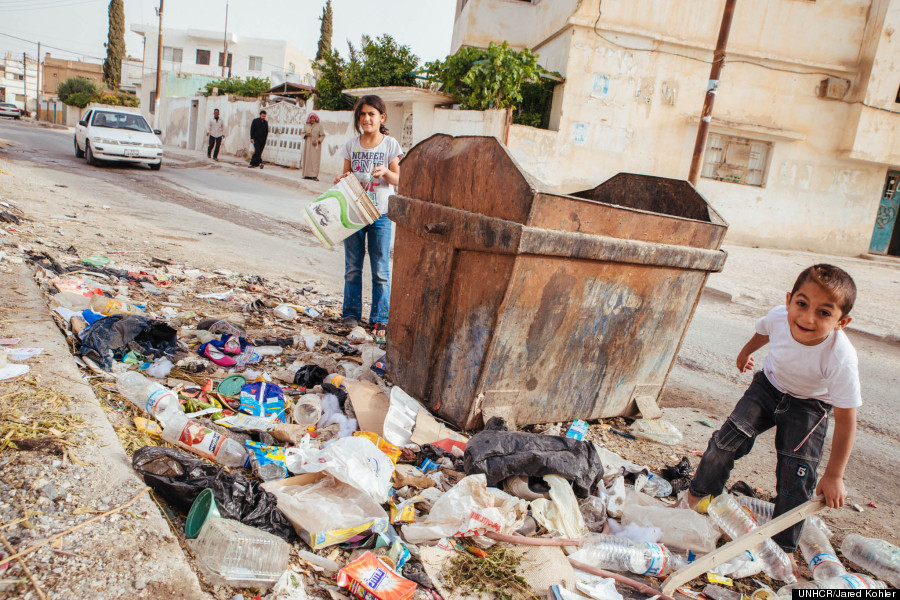 Aysha, 11, and Abdulqader, 6, look through the trash at a dumping site near their house right outside Za’atari refugee camp in May 2013. Their family sells aluminum, metals, solid plastics and other items to scrap dealers to make nearly enough to cover their rent. 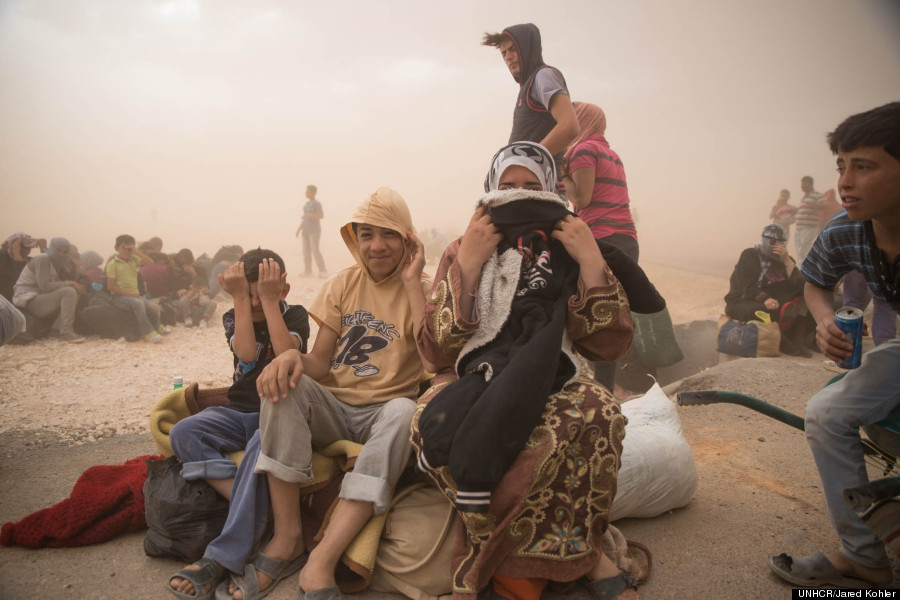 A dust storm rages in Za’atari as refugees wait for a space on a bus out of the camp in May 2013. Here, a mother sits with her sons, who say they are ready to return to Syria and face life there. 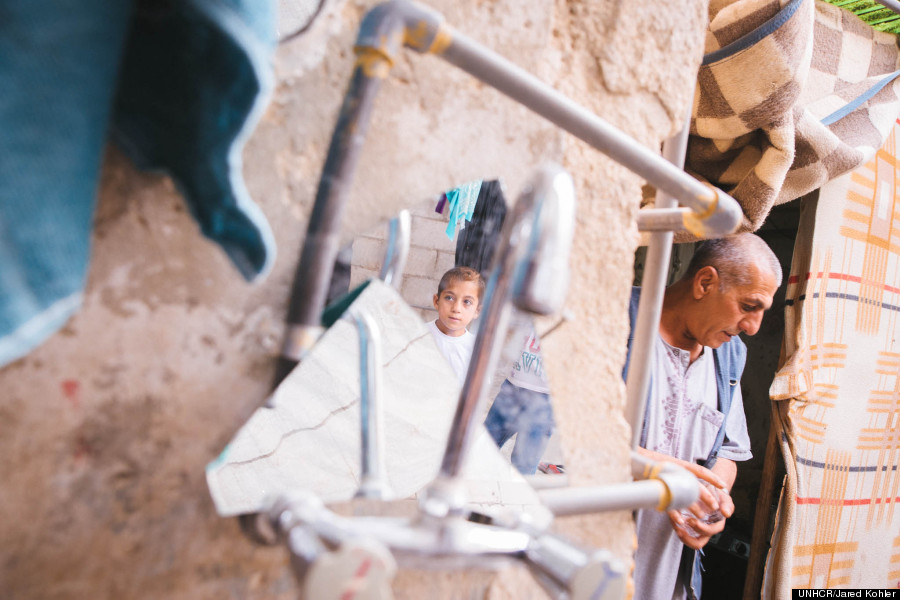 Fawaz, 60, from Homs, Syria, looks out of the house where he and his large family have taken refuge in Mafraq, Jordan. His youngest son, Abdulqader, 6, is reflected in a broken shard of glass the family uses as a mirror. 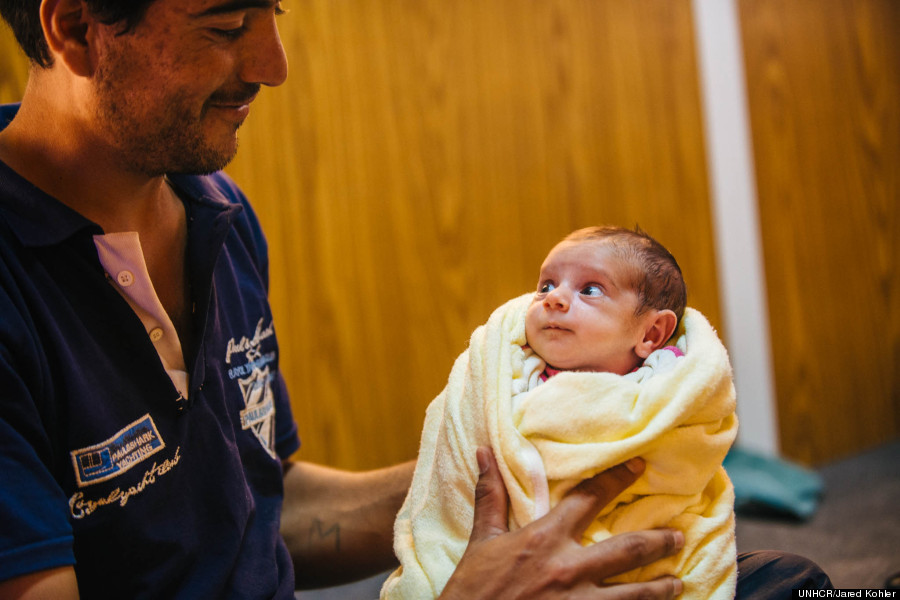 A Syrian refugee holds up his daughter, Hala, 17 days after her birth in October 2013. “Her name, Hala, comes from the word meaning ‘sweet,’” he said. “She was made here in Za’atari. When we came a year and two months ago, there was nothing here. Only dust and desert. Many things have gotten better since then.” 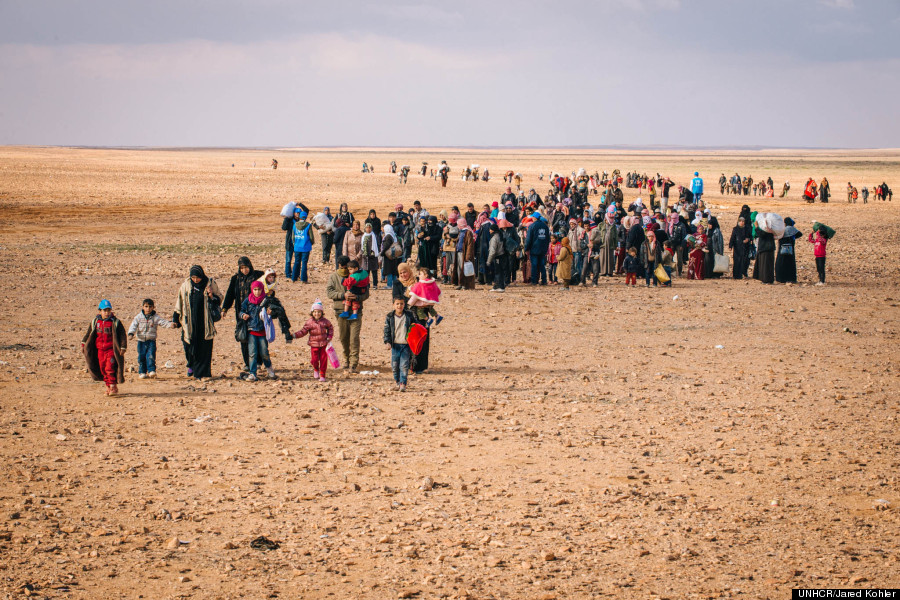 A group of Syrians crossing the border into Jordan in February 2014. They often come carrying little more than the clothes on their backs. 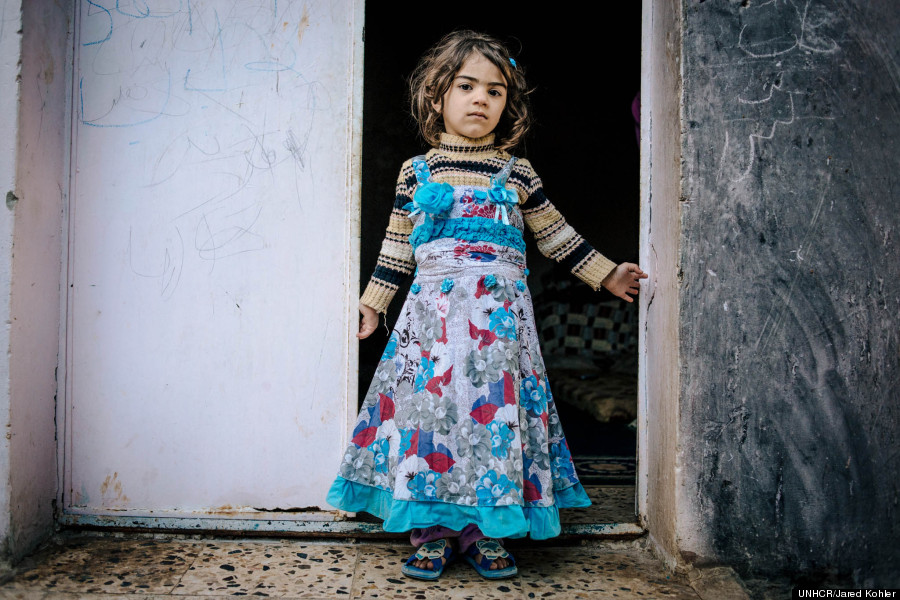 A Syrian refugee child named Jenna wears her favorite possession, a flowery dress. She stands in the doorway of the apartment she shares with her parents and three siblings in Ramtha, Jordan, where they often hear shelling. 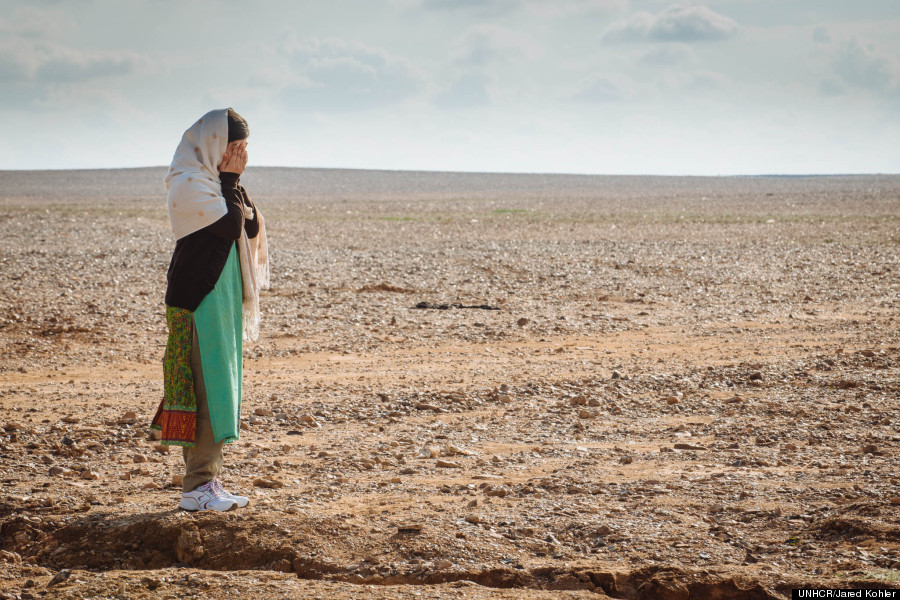 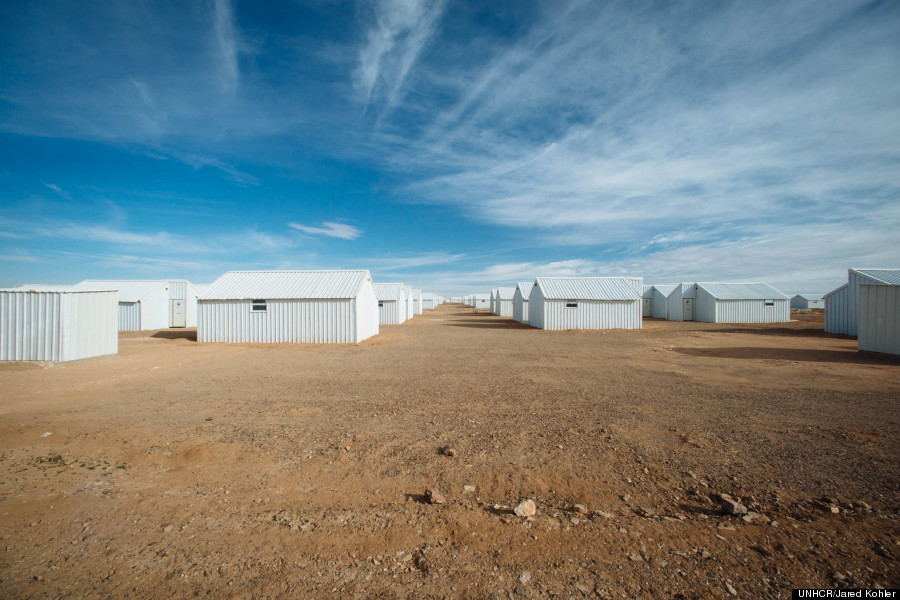 Transitional shelters await new arrivals in the soon-to-be-opened Azraq camp. Initially designed to receive 45,000 refugees, the camp has room to expand and hold 130,000. UNHCR expects to open the camp on April 30, 2014.