America is passing the buck when it comes to climate change.

The United States is the second-worst polluter in the world, after China, and its only “flagship” climate change law is more than 50 years old, according to the Globe Climate Legislation Study released Thursday. Meanwhile, 60 of the 66 other top-polluting nations have passed flagship climate change laws since 2000.

The study, coauthored by Globe International and the London School of Economics, defines flagship climate change laws as those that include more than one approach, such as pricing carbon, curbing energy demand or spurring energy efficiency. According to the report, the United Kingdom, Mexico, South Korea and the European Union lead with climate change legislation.

“It’s difficult to think of a country where America compares favorably,” Terry Townshend, policy director at the Globe and a study author, told The Huffington Post.

A chart in the study shows that most top-polluting countries have passed a flagship climate change law since 2000. Here’s part of the chart: 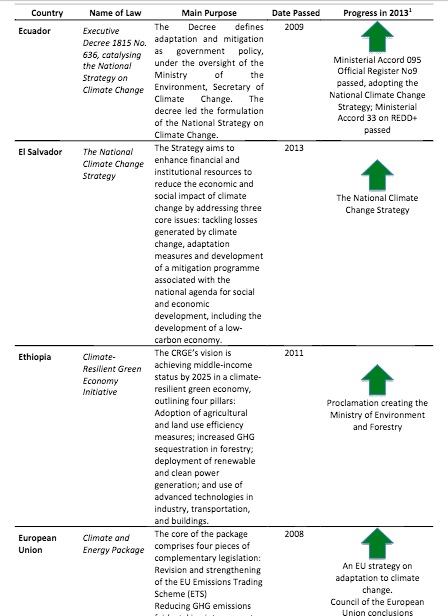 Meanwhile, the only U.S. flagship climate change law — the Clean Air Act — dates to 1963 and wasn’t conceived to deal with climate change:

While Congress has passed laws that support, for example, green jobs or energy independence, it has never passed a law solely dedicated to mitigating or adapting to climate change. When the U.S. Clean Air Act passed in 1963, it wasn’t connected to climate change. It wasn’t until the Supreme Court ruled in 2007 that greenhouse gases are air pollutants that the act was linked to climate change.

However, such executive action has raised opposition in Congress. “In the USA, dedicated climate change legislation remains politically challenging,” the report reads. In the last few years, the House Republican majority has passed bills to restrict the authority of the EPA, to expand the production of fossil fuels and to approve the controversial Keystone XL pipeline.

“When you look at other countries’ climate legislation, the U.S. is behind the curve,” Townshend said. He noted that the U.S. is falling behind in green technologies, while China and European countries have heavily invested in it.

“America is a country that prides itself on leadership. They never like to follow,” Townshend said. “But if they’re going to lead, they’re going to need some legislation and incentives to make it happen.”

On Friday, 100 legislators from 50 countries continue a two-day meeting in Washington to discuss the study as a part of a summit hosted by Sen. Edward Markey (D-Mass.). The summit is kicking off a new international initiative, the Partnership for Climate Legislation, supported by the United Nations and the World Bank Group. The partnership will bring legislators from around the world together to develop and push climate change laws.

“We need an international movement to pass climate legislation, and nowhere is that movement needed more than here in the United States,” Markey said in a statement.

“The Globe study shows legislators around the world are taking active steps to develop significant national legislation,” Markey said. “And I urge colleagues here in the United States to acknowledge the movement and take action.”